The state election in North Rhine-Westphalia 2017 was the election for the 17th state parliament of North Rhine-Westphalia and took place on May 14, 2017. The ruling coalition of the SPD and the Greens lost its majority. The CDU was the strongest party with 33.0% of the second vote. In terms of the share of votes, this was her second worst result in a NRW election. The SPD, led by Prime Minister Hannelore Kraft , received its worst result in North Rhine-Westphalia since 1947 with 31.2%, while the FDP achieved its best result to date with 12.6%. The alternative for Germany entered the state parliament for the first time with 7.4%. The result of the Greens almost halved compared to 2012 to 6.4%. The left narrowly missed entry into the state parliament with 4.9%, while the pirates clearly missed re-entry with 1.0%.

As a result of the state elections, a black-yellow coalition under the new Prime Minister Armin Laschet (→ Laschet cabinet ) replaced Hannelore Kraft's red-green state government (→ Kraft II cabinet ) at the end of June 2017.

The North Rhine-Westphalian state parliament is elected according to a system of personalized proportional representation with closed lists, which is similar to the federal election law . The state parliament has at least 181 members, 128 of whom are directly elected in constituencies with the first vote. However, the second vote is decisive for the relative size of the parliamentary groups in the state parliament. Overhang mandates are balanced out by compensatory mandates, so that a composition of the state parliament that is proportional to the share of second votes is practically always ensured. The nominations had to be submitted by 6 p.m. on the 48th day before the election (March 27, 2017) at the latest.

Compared to the last state election in 2012, some of the constituencies have been adapted to the changed population situation.

Voting by mail or voting in the voting office before the actual election date is also possible.

See also : List of the state electoral districts in North Rhine-Westphalia from 2017

From the 2012 state elections , the SPD emerged as the strongest parliamentary group after significant growth, the CDU became the second-strongest parliamentary group with a historically poor election result, and the Greens and the FDP had once again entered the state parliament. The pirates were able to move into the state parliament for the first time after having won strong votes. The left could not move into the state parliament again. The red-green state government under Prime Minister Hannelore Kraft , still a minority government in the 15th electoral term , had achieved a majority in favor of continuing its coalition.

The candidate who takes the first place on the list of a party is called the top candidate . Occasionally, parties also come up with two or more top candidates who take the first two (or more) places on the list. Spitzenkandidat is a term that is not anchored in the electoral law. The Prime Minister is not elected directly in the state elections, but by the members of the state parliament. In large political parties, these persons are often also candidates for the office of prime minister in the event that the party is able to form a government coalition.

The West German Broadcasting Corporation carried out a "candidate check" for the state elections. Each candidate for the state parliament should introduce themselves briefly in a video. As of April 19, 2017, a total of 966 of the 1329 candidates who entered were available with an interview video in the WDR database. The general conditions were the same for all respondents: The length of the video recording was limited to four minutes and no repetitions were possible. The questions asked were the same for everyone.

The WDR candidate check was awarded the Grimme Online Award in the information category. The jury recommends the project "expressly for imitation by other broadcasters".

The following table compares the positions of the parties represented in the state parliament on various topics. It refers to the answers given by the parties in the election-O-Mat of the bpb.

Both child day care and training to become a master craftsman should be free during core times. The model project “Leave no child behind” is to be expanded nationwide. The SPD wants to set up further regional innovation networks (RIN) for digitization . A gigabit fiber optic network will be built in North Rhine-Westphalia by 2026 under her leadership. A training guarantee is also mentioned as an electoral target, which was already in the coalition agreement of the previous legislative period and which was not implemented. 14 billion euros are to be invested in the expansion of motorways in the country by 2030, with at least 8 billion in the maintenance and expansion of the rail network. By promoting emission-free buses, pollution in city centers will be reduced significantly by 2025. 2,300 police officers are to be trained instead of the previous 2,000. Research and development would be promoted through taxation. At the same time, despite this additional financial burden, the budget will continue to be consolidated.

In order to reduce bureaucracy , many requirements, in particular the requirements adopted by Environment Minister Remmel , the hygiene traffic lights , the tariff compliance and awarding law and the climate protection law are to be abolished. Approval procedures would thus be accelerated, making it easier for family businesses to expand into their surroundings in North Rhine-Westphalia. In view of a per capita debt of more than 10,000 euros and a total debt of 141 billion euros, all expenditures have to be put to the test. North Rhine-Westphalia must be attractive to investors again. In terms of school policy, the CDU calls for a representation pool for which all schools would have to both measure and report missed lessons and in which school failures across the country would be collected. The closure of special schools for disadvantaged children is to be stopped. In order to counteract the shortage of trainees , there should be a transition system for young people with problems that always ends with recognized vocational training. Medical study places would have to be made more available in order to put an end to the shortage of doctors. Veil searches are to be made possible for the police in North Rhine-Westphalia , as in almost all other federal states. This also allows one to take more decisive action against rocker gangs, family clans and Islamism.

Digital learning methods are to be used to a much greater extent in schools in North Rhine-Westphalia. In addition, schools should be free to decide for themselves about finances, pedagogy, personnel, G8 or G9. “Personalities from research and business” should teach in schools. When buying the first house, young families should be given financial relief. Instead of tightening laws, the Liberals are calling for more modern equipment and more staff for the police. In order to eliminate the congestion problem, especially for commuters, investments in the road network of NRW will be increased. In terms of data protection, a NRW data protection seal is to be introduced. Like the CDU, the FDP wants to put public spending, programs, subsidies and state-owned companies to the test; the debt brake will be introduced at the state level. The previous solidarity surcharge will be waived and instead an allowance for real estate transfer tax of 500,000 euros will be introduced. Immigration should be controlled by an immigration law and integration should be made binding. In order to be able to organize work more flexibly, shops should also open on Sundays and B. Set product names more freely. In addition to deregulation , the FDP also focuses on digitization . So are Wi-Fi hotspots in public authorities and a digital public office be set up.

The farewell to coal in the next 20 years is to be made legally binding. By 2030, 50% of the electricity will be covered by renewable forms of energy. By 2025 the Greens want to create around 100,000 new jobs in the environmental economy. Barrier-free regional trains with area-wide WiFi are required. Instead of building new roads, the existing ones should be kept in good condition. Genetic engineering should be banned nationwide. The inclusion of disabled children is to be further promoted by closing special schools . 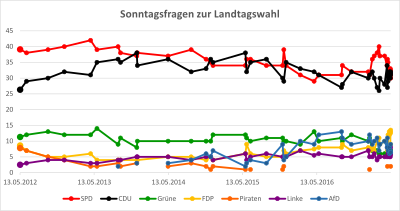 For the Sunday question, the polls indicated the following proportions in the individual surveys in North Rhine-Westphalia.

When asked who the citizens would vote for as prime minister directly, the polling institutes gave the following values: 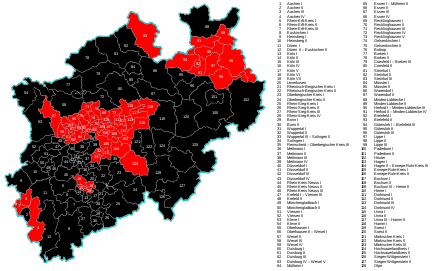 In March 2019, the Bundestag administration set a fine of 100,000 euros for illegal party donations in favor of Guido Reil's election campaign from the Swiss PR agency Goal AG . Jörg Meuthen announced that the AfD would object to this.

End of the "Schulz hype"

The defeat of the SPD or the red-green state government in their "heart chamber" was brought into the media in connection with the prospects of success of the Federal SPD and its candidate for Chancellor Martin Schulz in the 2017 federal election . After Schulz was surprisingly proclaimed the top candidate in January, he enjoyed great popularity at times, which was reflected in the SPD's polls. This phenomenon, which is unique in the history of the Federal Republic of Germany, was given the terms Schulz-Zug or Schulz-Hype . After the SPD, shortly after Schulz's election as federal chairman and candidate for chancellor, successively lost the state elections in Saarland , Schleswig-Holstein and North Rhine-Westphalia, which had previously been considered promising , at least one serious impairment of this phenomenon was found.

Personal consequences for the SPD and the Greens in NRW 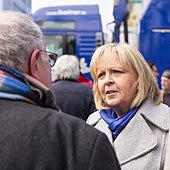 Hannelore Kraft during the election campaign in Cologne in April 2017

The election results had personal consequences for the losers, the SPD and Bündnis 90 / Die Grünen : Prime Minister Hannelore Kraft announced her immediate resignation as state chairman and deputy federal chairwoman of the SPD just a few minutes after the polling stations had closed and the first predictions were made Follow back from the public. On May 19, the SPD state executive nominated the previous building minister Michael Groschek as her successor . The day before, the Secretary General of the NRW SPD André Stinka had announced his resignation. The previous Minister of Science Svenja Schulze took over his office . The social democratic parliamentary group leader Norbert Römer , who was controversial after the defeat , was provisionally confirmed in office on May 30th.

Formation of a black-yellow coalition under Armin Laschet

On the evening of the election, based on the election results, both a black-yellow coalition (with only one vote in the state parliament) and a large coalition led by the CDU were initially considered possible. However, the SPD's state executive rejected a grand coalition the day after the election. The CDU top candidate Armin Laschet had announced shortly before that he wanted to speak to the SPD, Greens and FDP. Ultimately, however, only the CDU and FDP agreed on talks.

After the boards of both state parties had unanimously approved the start of coalition negotiations on May 22nd, the coalition round met for the first time on May 23rd in the Düsseldorf Youth Hostel . Another venue for the negotiations was the “Startplatz Düsseldorf” coworking space. After the negotiations were successfully concluded in mid-June 2017, the top representatives of the CDU and FDP submitted the negotiated coalition agreement to their parties for a vote. In an online membership decision by the NRW-FDP, 97 percent approved the coalition agreement. At a state party convention of the CDU in Neuss , 100 percent of the delegates voted unanimously in favor of the government agreement. As a result, twelve representatives of the party leaders, including the chairmen Christian Lindner and Armin Laschet , signed the coalition agreement on June 26 in Düsseldorf-Oberkassel on the banks of the Rhine.

On June 27, 2017, Laschet was elected Prime Minister of North Rhine-Westphalia with 100 votes in the coalition in the state parliament . On June 30th, the ministers of his cabinet were appointed and sworn in.

Elections to the state parliament of North Rhine-Westphalia

Elections to state parliaments in Germany 2017