Mark Oliver Benecke [ benɛkə ] (* 26. August 1970 in Rosenheim ) is a German forensic biologist , a specialist in forensic entomology and politicians . He is chairman of the state association of North Rhine-Westphalia of the party “ Die PARTEI ” and regularly stands for them as a candidate in elections.

After studying biology and psychology at the University of Cologne and gaining a doctorate with summa cum laude on genetic fingerprints , Benecke completed various technical training courses in forensic medicine in the United States , including at the FBI Academy. At the beginning of his studies he was also enrolled in German studies , psychology and theater studies , but then limited himself to biology with psychology as a diploma minor. In the field of his minor subject psychology, he primarily dealt with learning experiments on animals. According to his own statement, he knows less about psychology, he is all the more interested in biology: “Although I also studied psychology as a minor, as a student who is deeply dedicated to biology, I was not so interested in human software as its hard wiring with nerve and nervous systems Sensory cells. The motives of a serial killer cannot be traced in this way. "

Benecke is called in as a publicly appointed and sworn expert to evaluate biological traces of suspected violent crimes with fatal consequences. He is also a trainer at German police schools and a visiting professor in the United States, Vietnam , Colombia and the Philippines . In the late 1990s, Benecke was employed as a forensic biologist in the Office of Chief Medical Examiner (Institute for Forensic Medicine ) in Manhattan .

The National Geographic Channel , History Channel and n-tv have already covered some of his cases in detail. Benecke is also known to the broader public through his guest comments in the television series Medical Detectives ( VOX , RTL Nitro ) and Autopsy - Mysterious Deaths ( RTL II ), which shows the investigation of real criminal cases and focuses on the mostly scientific methods used. There he explains the scientific background in a generally understandable way.

Benecke has published several popular science books , including on criminal cases, criminal biology and aging from a biomedical perspective. In addition, he published children's experiment kits and books for Ravensburger and Oetinger, among others . Several of his books reached in the mirror - bestseller high rankings and have been translated into many languages. His former wife, the criminal psychologist Lydia Benecke , is a co-author of some of his books.

He is also guest editor for Forensic Science International (Forensic Entomology Special Issue) and was a member of the Science Council of the Society for the Scientific Study of Parasciences . He published books and articles in the magazines Skeptical Inquirer and Kriminalistik on unusual topics such as spontaneous spontaneous combustion , blood miracles (together with ZDF ), vampires , magnetic mountains and others.

Benecke works on the Scientific Advisory Board and as co-editor for the Annals of Improbable Research , which annually awards the Ig Nobel Prizes at Harvard University .

Benecke has been chairman of the ProTattoo association since 2011 (information, training and public relations for and by members of the tattoo industry).

Mark Benecke as moderator at the Amphi Festival 2013

Since 1999, contributions by Mark Benecke on current scientific topics can be heard on the public broadcaster Radio Eins on Saturdays . "Der Benecke" is radioeins' most successful scientific podcast . In the ARD audio library, the podcast “Der Benecke” is in the top ten in the knowledge category. Since August 2, 2006, “Der Benecke” has also been published as a podcast under the name “Der Benecke”. This makes “Der Benecke” one of the very first podcasts on the German radio market.

From 2010 to 2011 Benecke was a columnist on the opinion page of the Frankfurter Rundschau and from 2001 to 2011 he had a monthly column in the journal Laborjournal, which is widely used by German-speaking biologists . From 2012 to 2015 he was a regular columnist for the tattoo magazine, and has continued to report there irregularly since then. In 2017, on behalf of and for the permanent collection of the Grassi Völkerkunde Museum in Leipzig , he collected interviews with tattooed people and introduced the tattoo and piercing exhibition in a video installation.

Until 2007 (and with regular repetitions until today) he was and is to be seen as a forensic doctor in the show Niederig und Kuhnt - Commissioners determine . Also in the Galileo mystery issues about Jack the Ripper (2006), the Popess (2006), Pirates (2006), The Crucifixion of Jesus (2007), Curses (2007), Zombies and Revenants (2007) and Vampires Among Us? (2011) he appeared as a criminal biologist and criminalist. He also appeared in the crime programs Autopsy - Mysterious Deaths and Murder Files on the private broadcaster RTL II and Medical Detectives on the partner broadcaster VOX .

As president of the Transylvanian Society of Dracula , he was the laudator of the 2009 Corine award ceremony for the audio book The Forbidden Place by Fred Vargas , in which the so-called vampire case Plogojowitz is a central theme.

Benecke has been a frequent guest on German-language talk shows since around 2000, where he takes a stand on crime topics. He has also appeared several times in children's programs such as 1, 2 or 3 and the Tigerenten Club .

For the Franco-German broadcaster Arte, Benecke worked together with Michaela Schaffrath as the protagonist in episode 34 of Through the Night with ... (Director: Jörg Buttgereit ).

In 2017, Benecke spoke in a short cameo in the horror radio play Blood Red Sandman . In the bonus material for Bluray He is back (2015), he appears on a talk show with Christoph Maria Herbst . Mark Benecke speaks the audio commentary on the German, restored and uncut version of the DVD and Bluray of the Texas Chainsaw Massacre 2 (2018).

In the cinema documentary Rest in Peace (cooperation with Arte , 2010), the Benecke team can be seen in action in forensic medicine in Bucharest . In the documentary film Finding Tom Bombadil (cinema premiere Easter 2019), Benecke traces the character Tom Bombadil from the Lord of the Rings .

In February 2020, the documentary film Schweinchen - a decomposition film made by Benecke premiered (director: Jörg Buttgereit ) at Babylon Berlin . The film shows the decomposition process of five animals. The main actresses of the films Nekromantik and Nekromantik 2 were present at the premiere . In July 2020, the film Leif in Concert , in which Benecke plays himself, started across Germany .

In 1989, together with Klaus Fehling , he founded the pop-punk band Die Blonden Burschen in Cologne , to which he belonged until 2000 under the stage name Belcanto Bene .

From the year 2000 Benecke appeared in a play by Klaus Fehling and Posttheater Berlin / New York / Tokyo in the play The Real Forensic in Berlin , Singapore and other cities as the actor Murat Belcant , without the riddle about the actor being solved would have been.

In 2009, Benecke spoke about real, bizarre construction site accidents for the album Baustoff by the electronic band Patenbrigade: Wolff auf.

For the 19th Wave-Gotik-Treffen (WGT) in May 2010, a cover version of Nick Caves Where the Wild Roses Grow , originally from the album Murder Ballads , was released by Benecke with Sara Noxx , which was produced by well-known electronic bands such as Feindflug , Contrast , The Eternal Afflict and others have been remixed. The cover version of Falcos Jeanny , also recorded with Sara Noxx, reached number 1 in the German alternative charts in April 2016.

In May 2018, for the 27th Wave-Gotik-Treffen, a CD by Benecke with Bianca Stücker with cover versions of Some Velvet Morning was released . In November 2018 appeared on the CD Invader of Noisuf-X , a track (sample) by Mark Benecke ( 'Killer') . Benecke can be heard as a forensic biologist on CD Plänterwald by the band Contrast (summer 2019), as well as on Empty World from 'Menschdefekt' (2020).

He regularly appears as a speaker and moderator at the Amphi Festival and the WGT. For the bands Agonoize and Patenbrigade: Wolff can occasionally be seen as a "company doctor" in cameo appearances on stage. He opened the 20th to 27th WGT as a DJ together with DJ Elvis.

On the album "Wir sind die Guten " by the Thuringian band Traumfresser , Benecke appears as a feature guest in the song Another Part .

Benecke can be seen as a cameo or lead actor in several music videos, including:

For the animal rights organization PETA he campaigns for the protection of marine invertebrates and against the keeping of circus animals.

Because of his work with octopuses, Benecke became a vegetarian and advocates vegetarianism publicly. He is now completely vegan . PETA co-founder Ingrid Newkirk asked Benecke to execute her will on her corpse. The slogan Peta Zwei used just leave animals alone for a while comes from Benecke.

"Because Mark is successfully involved in teaching science in a special way and encourages laypeople as well as experts to pay attention to the unexpected and the inconspicuous", the animal species Astrophiura markbeneckei - a brittle star from the deep sea - was named after him.

Benecke at an election campaign event in Cologne, 2015 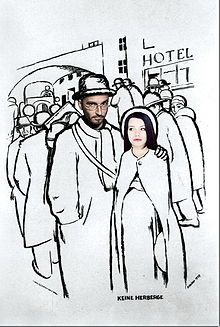 Drawing by Peter Hecker from 1929, revised by Cornel Wachter : "Christmas 2015" with Mark Benecke as Josef and Cosma Shiva Hagen as Maria looking for a hostel

In the mayoral election in Cologne on October 18, 2015 , Benecke stood as a candidate for Die PARTTEI and achieved third place with 7.22% of the valid votes behind the elected individual candidate Henriette Reker and the candidate of the SPD, Jochen Ott . In the state elections in North Rhine-Westphalia in May 2017, the PARTY with Benecke as the top candidate in the Cologne city center electoral district, with 3.6%, achieved the highest number of votes among smaller parties and was also ahead of the AfD.

In the 2019 European elections , Benecke stood as a candidate for Die PARTTEI (25th place on the list).

Benecke is speaker at LEAP ( Law Enforcement Against Prohibition ) Germany e. V. , which campaigns for the legalization of drugs , as well as supporters of dudeism .

Benecke has been a member of the German Zoological Society since 1995 and welcomed its resolution, published as the Jena Declaration , according to which the concept of human races is “the result of racism and not its prerequisite”, and in the course of this called for an amendment to Article 3 of the Basic Law . He had previously spoken out against any further use of the term race.

In addition, he deals with Donaldism and published new findings as well as interviews with Donaldists and artists on his homepage, in the journal Der Donaldist and in podcasts. He accompanied the relaunch of the U-Comix extensively. Benecke deals scientifically and critically with phenomena of the parasciences such as magnetic mountains, spontaneous self-ignition of people (SHC) and blood miracles. Until he left in 2018, he regularly supported the skeptics association GWUP and was a member of the GWUP Science Council until 2015. In February 2011 he supported the 10:23 campaign in Cologne. Benecke discussed parapsychological aspects of research with the psychologist Eberhard Bauer from the IGPP .

Books and experiment kits for children and young people