The title of this article is ambiguous. For the Kreuzberg cinema see Babylon (Kreuzberg)

The Babylon is a cinema in Berlin district of Mitte , is part of a landmarked building complex on Rosa-Luxembourg-Platz opposite the Volksbühne is. The building was built in 1928/29 according to plans by the architect Hans Poelzig and is considered an exemplary work in his creative period of New Objectivity . In 1948 the house was heavily rebuilt and then served as a specialty cinema in the GDR . After the cinema hall had to be closed in 1993 due to the risk of collapse, it was renovated from 1999 to 2001 and reconstructed in accordance with the listed building standards. The reconstruction was awarded the "German Prize for Monument Protection" in 2002.

From 1927 to 1929, Hans Poelzig designed eight blocks on the Bülowplatz (today: Rosa-Luxemburg-Platz) on behalf of the builder Alfred Schrobsdorff (1861-1940) for a perimeter block development on the square. The completed blocks contained 170 apartments and 80 shops. The block in which the Babylon is located, having the shape of a right triangle, wherein Hirtenstraße and Small Alexanderstraße the catheti form, while the Weydingerstraße the block as hypotenuse limited. The floor plan of the block is faceted at the acutely angled corner of Weydinger and Hirtenstraße, so that the building has a short facade facing Rosa-Luxemburg-Straße. The entrance to the cinema is located here at Rosa-Luxemburg-Straße 30 . The block of Babylon is the only completely preserved ensemble from the overall design by Poelzig after the war damage.

The structure is structured horizontally by a banded enclosure of the rows of windows and a protruding cornice on the roof panel. The facade is plastered in an ocher color , the bands are made in a lighter shade of yellow - also in plaster. In keeping with the New Objectivity, the interior design was also characterized by the economical use of materials while at the same time exploiting the emotional effect of colors and shapes:

“From a spacious vestibule in gray, red and yellow, from which two wide stairs lead up to the gallery, one arrives at the stately auditorium, which is given a warm and cozy atmosphere without any expenditure on decorative shapes, simply by colored treatment. The wall and ceiling are tinted yellow, the niche and the parquet boxes are painted out in red and set off with a narrow copper-colored ribbon, the balustrade of the chairs is blue, the chairs are covered with velvet of the same color. The woodwork of the doors and the grilles of the heating and ventilation are painted red. "

Poelzig also worked as a set designer and architect for film and theater in the 1920s, the most important film with his participation was The Golem, How He Came into the World (1920) by Paul Wegener and Carl Boese . In addition to the Babylon, Poelzig designed two other cinemas: the Capitol am Zoo in Berlin (1924–1926) and the Deli in Breslau (1926/1927). 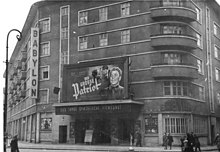 Demonstration against the closure of the cinema, January 9, 1990

Berlin memorial plaque at the cinema

On April 11, 1929, the Babylon was opened as a silent film cinema. There was an orchestra pit and a cinema organ for the musical accompaniment of the films . During the renovation (1948) the orchestra pit was closed and the organ dismantled. A Babylon projectionist, Rudolf Lunau , belonged from the " seizure of power " in 1933 until his arrest in 1934 to an illegal KPD resistance cell , which he held in "his" projection room, where he also hid opponents of the regime in hiding. A metal plaque in the foyer of the cinema has been reminiscent of Rudolf Lunau since the early 1980s.

After the end of the Second World War , the Babylon was reopened as a premiere theater on May 18, 1948 under the direction of the Sovexportfilm agency in Germany. The Babylon cinema served as a special interest cinema in the GDR until 1989, but the GDR State Film Archive and the Association of Film and Television Makers of the GDR (VFF) also held performances here, for example the DEFA series “Offers” from 1984–1989 - Documentary studios. In 1993 the great hall of the cinema had to be closed due to the danger of collapse . The foyer of the cinema was then converted into a provisional venue with 68 seats.

The two-year renovation of the Babylon began in 1999. It cost ten million marks and was 60 percent financed by the State of Berlin from the budget for urban monument protection; Lottery funds of two million marks were available for armchairs, film and sound technology. The main renovation measures were necessary on the roof and the ceiling of the large hall. The wooden beams in the ceiling that were no longer load-bearing were replaced by steel girders and a new roof was erected on top. The facade was also renewed.

In the sense of a critical reconstruction , the aim of the renovation of the interior was not to consistently achieve an arbitrarily dated "original state", but to deliberately represent the various construction states and periods of use. The opening state of 1928 was sought in the foyer , while the hall was renovated in the manner of the 1948 conversion: with plush armchairs, stucco and gold-plated details. The original building could be used as a cinema as well as a theater and therefore had a stage . The small hall was created in this room behind the canvas of the large hall. The orchestra pit of the large hall has been restored so that music for the film can now be played live with a chamber orchestra . In 1999, then 70 years old was Philip - cinema organ restored, which is thus operated as the only theater organ in Germany still on the original site.

In May 2001, the great hall reopened with the film Othello (1952) by Orson Welles . In 2002 the association “Berliner Filmkunst Babylon” was awarded the “Silver Hemisphere” of the German Prize for Monument Protection . The architects Joachim Roemer (association) and Klaus Meyer-Rogge (planning and construction management) were honored for rescuing a “key building in cinema architecture”.

Since 2001, Babylon is used again, primarily as a cinema , but also for cultural events. The cinema originally had 1200 viewers in one hall, but is currently divided into three halls with 500, 68 and 43 seats. 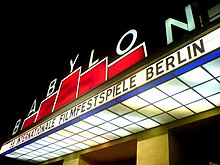 Entrance during the Berlinale

The Babylon serves as the venue for the Berlin International Film Festival (Berlinale). The 11mm football film festival is also held in Babylon every March . Forensic biologist Mark Benecke has been giving regular public lectures on crime , crime films and crime biology in Babylon since 2000 .

The repair of the cinema organ made the series “Silent Film Concerts” possible with the composer and pianist Stephan von Bothmer , who inaugurated the organ on May 26, 2001 for the screening of the film The Golem, How He Was Born .

As the last surviving cinema from the 1920s (" silent film era "), the Babylon has since placed a thematic focus on the performance of silent films: With Anna Vavilkina, the cinema employs Germany's only permanently employed cinema organist. In addition, the Babylon Orchester Berlin was founded on the occasion of the 90th anniversary of the house in 2019 . Under the direction of Marcelo Falcão, it accompanies live performances of films of the era.

In 2009 some Babylon employees, some of whom were organized in the anarcho-syndicalist FAU , tried to push through higher wages and better working conditions. At the end of July 2009, the Berlin section of FAU called for a boycott of the cinema. On January 1, 2010, the ver.di union concluded a collective agreement for Babylon employees. Since 2009, the operator of the cinema has been involved in a legal dispute with FAU regarding the right to designate oneself as a union. The LAG Berlin determined in October 2009 that the FAU had no tariff capacity due to its “insufficient power to enforce” . An interim injunction issued by the Berlin Regional Court in December 2009 , in which FAU Berlin was banned from calling itself a “union” or “basic union”, was repealed in June 2010 by the Berlin Regional Court.