The term New Objectivity also owes its origin to the fact that when prominent artists turned away from Art Nouveau before the First World War in Germany, there was already a certain “first” objectivity in architecture and applied arts. The approaches to formal simplification in the arts and crafts were already evident at the 3rd German arts and crafts exhibition in Dresden in 1906 . With the establishment of the German Work Federation in 1907, the terms in exhibitions and publications objectivity , purposefulness and Modern purpose style along with the first approaches to industrial design theme in an increasingly wider public.

The Steiff factory building from 1903 was a pioneer of the New Objectivity, it was the first to use a glazed curtain wall .

The end of this "first" objectivity in architecture can be dated to the beginning of the First World War with the first signs of expressionism already becoming visible and in connection with the disputes in the run-up to the great Cologne Werkbund exhibition in 1914, where the rebellion emerged in a kind of dispute over the direction a young generation of artists (including Walter Gropius and Bruno Taut ) announced against Hermann Muthesius . 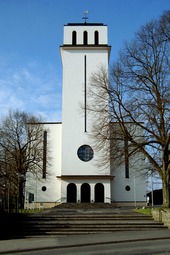 Portal view of the Catholic Church of St. Josef in Remscheid-Süd, built AD 1928 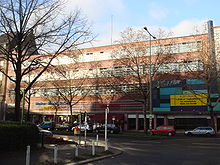 The New Objectivity also includes numerous buildings and urban development projects by architects such as Bruno Taut and Ludwig Mies van der Rohe , such as the Weißenhofsiedlung from the second half of the 1920s. One of the most important propagandists of the transition from Expressionism to New Objectivity or so-called “ Rationalism ” is the critic Adolf Behne , especially his 1925 work Der moderne Zweckbau .

The Catholic Church of St. Josef in Remscheid-Süd can be regarded as a typical sacred building of this era. Here, the vertical lines and cubic bodies of the "New Objectivity" combine in a harmonious way with the traditional elements of church buildings, such as the arched windows.

The New Objectivity ended in Germany with the seizure of power by the National Socialists with their corresponding cultural policy, which among other things also led to the closure of the Bauhaus and the emigration of many representatives of this direction to the USA.

In Austria , the work of the architectural duo Emil Hoppe and Otto Schönthal is particularly noteworthy, who, along with Marcel Kammerer, belong to the innermost circle of Otto Wagner's school . The indoor swimming pool (1932) and foyer (1934) of the Semmeringer Südbahnhotel are among the few surviving examples of her work .

After the Second World War, it was primarily Franz Mörth who took up the tradition of New Objectivity. His most important works include the new building of the Vienna Chamber of Labor and the renovation of the former Wienerwald sanatorium in 1952.