The title of this article is ambiguous. Further meanings are listed under architecture (disambiguation) . 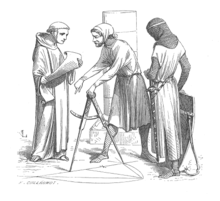 Builder in the Middle Ages 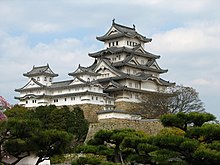 Traditional architecture : Himeji-jō in Japan from the 17th century 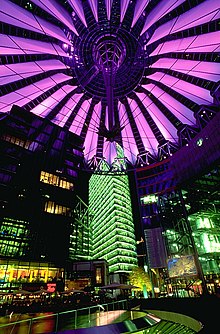 The word architecture (from Latin architectura , building art ; this from ancient Greek ἀρχιτεκτονία architektonía with the same meaning) describes in the broadest sense the manual occupation and aesthetic engagement of people with the built space . Full plan design , shapes and construction of buildings is the central content of architecture. There are a variety of definitions of the term, which ascribe different tasks, contents and meanings to architecture. Some are shown below.

Vitruvius already spoke of the “mother of all arts”, which can mean both the chronological sequence and the ranking of architecture compared to sculpture and painting . In the classical understanding since Vitruvius De Architectura , architecture is based on the three principles of stability (Firmitas) , usefulness (Utilitas) and grace / beauty (Venustas) .

The architecture . Figure at the Orangery Palace (Potsdam) 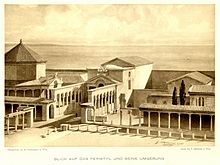 The word architecture is the German version of the Latin architectura , architecture , which is derived from the Greek ἀρχιτέκτων architékton . The latter is made up of αρχι- archi- , German 'main' and τέκτων tékton , German ' master builder ' or ' carpenter ' and can therefore be translated as 'chief craftsman' or 'master builder'. The definition of what architecture is today therefore also depends on the architect's field of activity. The term has changed again and again in the course of history and can only be grasped historically in its full depth.

Limitation of the term

In the narrower meaning of the classical architecture term, architecture means the science and art of the planned design of the built human environment, i.e. H. dealing with man-made space and especially the interrelationship between man, space and time. The classic architecture term includes various facets of meaning. He's standing

The town planning is concerned on a larger scale with the design of cities and large building complexes and the interaction between buildings and their environment.

The landscape architecture deals with landscaped gardens and an architectural point of view.

The aim of interior design is to design interiors.

This definition has been controversial, especially since the beginning of the 20th century. Accordingly, most attempts at definition can only be understood in the context of certain debates about the content, task and meaning of architecture, whereby the respective contemporary building with its aesthetic, technical, economic and political implications must also be taken into account. Similar to the concept of the work of art , the concept of architecture does not seem possible to limit itself to the mere description of a word or a thing.

The fact that the evaluations of the respective works of the architects are mostly controversial is inevitable, since it is not only a question of a competition of talent and competence, but also of the validity of the individual value systems. Due to the variance of architectural conceptions, there is a great variety of forms in architecture today.

Classical architecture according to Vitruvius

According to Vitruvius (De Architectura) , architecture is based on three principles: stability (Firmitas) , usefulness (Utilitas) and grace / beauty (Venustas) . All three categories must be taken into account equally and equally. On the one hand, they should determine the architectural design and, on the other hand, serve as criteria for assessing the finished building.

The Basilica Palladiana in Vicenza by Andrea Palladio . The architecture of the Renaissance transmitted is classic antiquity and led her away.

“Ordinatio”, “eurythmia” and “symmetria” refer to the proportions of the building. "Ordinatio" stands for "scale", ie the appropriate dimensional division of the members of a building, "eurythmia" for the graceful appearance and the true to size appearance in the assembly of the structural members and "symmetria" for the harmony of the individual elements with one another. In the first chapter of the third book , in which Vitruvius explains the idealized proportions of the human body, the reduction of its dimensions to basic geometric shapes such as square and circle, and the modular basis of number systems, these statements on proportioning are deepened.

"Dispositio" refers to the conception or disposition of the building and the necessary building plans, which he defines with floor plan, section and perspective view ("ichnographia", "orthographia" and "scaenographia").

“Decor” refers to the flawless appearance of a building in accordance with the rules of recognized conventions. As examples, Vitruvius cites u. a. the correct assignment of types of columns (Doric, Ionic, Corinthian) to certain deities in temple construction, the coordination of outside and inside, of stylistic elements to the overall style, of rooms to cardinal points, etc.

The classic column order introduced by Vitruvius is still used in architecture today.

Where does architecture begin and where does “mere building” end?

The idea of ​​what the actual architectural achievement in the design and manufacture of a building is and what raises the building above the purely functional has changed significantly in the course of the past century: Up until the end of the 19th century it was primarily the use of traditional forms of construction ( style ) with often ornamental decorations in which the artistic rank manifested itself as the added value and beauty of a building in conscious opposition to a pragmatism .

With the functionalism of the 20th century, a concept of architecture became predominant, which gave priority to the purpose of buildings (including engineering structures). In the process, the constructive, proportion -giving and space-defining aspects of building became the design theme of architecture. At the same time, through numerous depictions of modernity, progressiveness and the expression of the respective present, priority was sought for functionalist architecture. This functionalist understanding of architecture was loosened up in movements like postmodernism and deconstructivism . 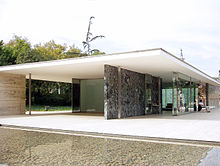 Architecture can be defined by its space-creating character. From this perspective, architecture consists in the duality of space and shell . Architecture creates a boundary between outside and inside. This border or shell creates an interior space and an exterior space (e.g. urban space) for the purpose of movement, residence and activity of people. 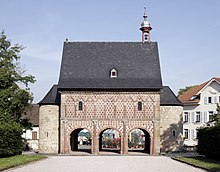 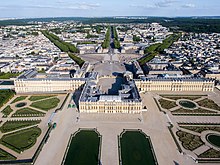 Built absolutism : The Palace of Versailles - the king as a central point of reference 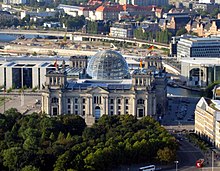 Built democracy : the Reichstag building - the people above parliament

Architecture manifests itself in a single building, a building complex, a settlement structure or even in an entire urban complex. Both the individual form of smaller and larger units and the entire urban morphology are influenced in particular by climatic, technical, topographical and economic parameters. In addition, legal , religious, political and other social conditions also have a massive influence on architecture, town planning and urban planning. Above all, the representative architecture is often the visible expression of the respective form of society and rule . For example the Palace of Versailles as an expression of absolutism . Architecture is thus an essential part of a society's cultural identity.

An example of administrative factors is the housing policy that the Federal Housing Administration (FHA) has maintained in the United States since the end of World War II . The federal government in Washington, DC had tasked the FHA with making sure that every war veteran could own a home. Since the FHA was convinced that avant-garde homes were not a good investment for veterans, the banks also declined to encourage the construction of “ultra-modern” homes (especially in the international and contemporary styles) by granting personal loans. The result was that in the US, single-family houses have been built almost exclusively conservatively (currently e.g. Millennium Mansion ).

Modern man is continuously surrounded by buildings and architecture. It can have a positive or negative effect on mood and psyche . It can also have an impact on physical health. Architecture therefore has a very concrete meaning for everyone and determines everyday life much more than music, literature or painting. The quality of the living environment should therefore be an important concern of society .

Only a part of all structures and buildings are planned by architects. In economically less developed areas, the vast majority of them are built in-house or by craftsmen without much planning . The standardized production of buildings predominates in the industrialized nations. Architects are called in primarily for complex planning or representative structures. This also gives rise to the widespread opinion that architecture only relates to special buildings and should be differentiated from “ profane ” building. The negative consequences of this demarcation between architecture and building are visible in all modern cities.

In Germany, the Federal Foundation for Building Culture tries to raise awareness of the great importance of architecture. In Austria, the federal arts section has its own department for architecture and design, as well as an architecture foundation and the platform for architectural policy and building culture . In some countries, good architecture is even recognized as a national goal, in France since 1977 and in Finland since 1998.

In some cases, architecture achieves a high level of acceptance among the population, who see a building as a symbol of their values ​​and attitude to life. Examples are the Eiffel Tower in Paris (symbolizing the city) or the Twin Towers in New York , which were destroyed as symbols of capitalism and western culture. 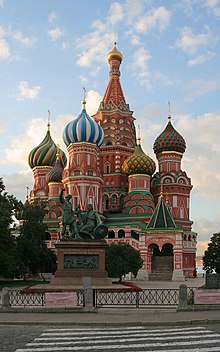 Shape: In the St. Basil's Cathedral in Moscow, colors, materials and ornaments emphasize the partial shapes of the building 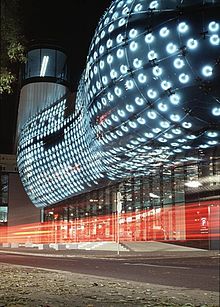 Facade: The BIX media facade of the Kunsthaus Graz 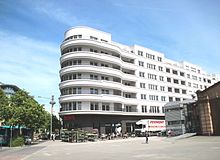 The architects repeatedly deal with certain topics , regardless of style and era . These topics are also the fundamental criteria of architectural criticism . They have to be considered anew with every design that is generally unique .

Online databases on architects and buildings