This article covers the craft of the sculptor. For the genre of art, see sculpture . For the constellation see Sculptor (constellation) . 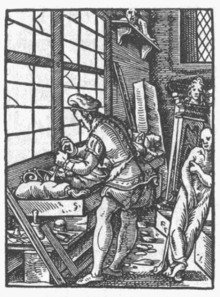 The term sculpture encompasses the whole field of the production of sculptures and sculptures in arts and crafts . The word stands for activity in general. In colloquial language, it can also refer to the finished work of art (“a successful sculpture”) and the sculpture as a whole. Rare is a workshop or the company of a sculptor than sculpture called.

Originally a sculptor was a craftsman who “cut” the image out of stone or wood, that is, knocked it out of the material. However, as early as the Krünitz encyclopedia (18th century) it can be read that it is not just about a chopping activity; he defined the sculptor as an artist "who [...] carves, hews, digs and cuts pictures". In the meantime, the meaning has expanded and mostly also includes the area of ​​modeling and artistic work. In sculptural work today, very different materials can be creatively processed and put together.

Allegory of sculpture with the attributes Fäustel and Werk ,
sculpture by Johannes Benk at the Kunsthistorisches Museum in Vienna

Much more conspicuously than in painting , in the plastic arts the material is brought to bear with its own character. It carries meanings such as durability or preciousness, it can express tension, hardness, softness or sharpness, it behaves very differently to light and space, and above all it almost always shows very clearly the traces of the processing by the artist.

The creation process of a sculpture can go through designs in different materials. Greek bronzes were copied in marble by the Romans . The medieval bronze caster used a wax model. A bozzetto made of clay, wax, stucco or softwood has served sculptors as a design since the Renaissance . The plaster of paris form with its unlimited possibility of application and removal is a preliminary stage of many modern bronze casts.

As Alabaster some different chemical compositions rocks are called, have similar properties. The white color gives them a resemblance to marble, but alabaster is softer, easier to polish and even more translucent than this. In the 14th to 16th centuries, alabaster reliefs made in England were exported to many European countries.

Sculpture in marble: Näckrosen (water lily), Stockholm 1892, by Per Hasselberg (1850–1894); Copy from 1953 by Giovanni Ardini (Italy) in Rottneros Park near Sunne in Värmland

White marble itself seems to have been used for sculptural purposes for the first time in the Cyclades around 3000 BC and since then has determined the sculptural art of antiquity in its various varieties. Types: Marble from Naxos is not translucent and has a coarse crystalline structure. On Paros , a slightly gray shimmering variety, but also a grainy, completely white marble is broken. Athens often obtained the stone from the nearby Pentelikon , its color tends to be slightly gray or yellowish (“golden”). The Romans mined white marble in the Apuan Alps . There is also Carrara , whose dazzling white variety has been valued by sculptors again since the 13th century.

In France, limestone and in Germany sandstone was the most common material for Gothic building sculpture. The modern age has hardly any restrictions on the choice of materials by sculptors.

Hard minerals for the glyptic

Jade is a hard mineral that appears in all shades of green. It rarely occurs in pieces larger than about 30 centimeters. Jade was most important in Chinese culture.

Other hard stones from the quartz family: carnelian , chalcedony , hematite , agate and others were used for the small works of art that gem cutters turned into pieces of jewelry and seal stones and often created amazing examples of relief art in small formats. With cameos , the different layers of stones were often used to highlight certain elements of the picture in different colors.

Certain mussel shells can be processed into cameos more easily than hard rock, for example Italian craftsmen in the 19th century used certain snail shells for such reliefs.

Hard igneous rocks such as granite , porphyry or diorite were used in large format for depictions of rulers in Egyptian art. Another historical center was South India.

Porphyry was only used for decorative and architectural elements during the Roman Empire. The famous tetrarchs from St. Mark's Basilica in Venice from the fourth century are an exception as sculptures, especially since the extraction was stopped in the fifth century and was not rediscovered until the Italian Renaissance of the 16th century. Porphyry can only be ground, but hardly worked with a chisel . In the modern age, when technical aids are available for easier processing, granite and similarly resistant stones are often used as permanent material for outdoor sculptures.

The history of wax plastic ( ceroplasty ) has precursors in the production of bronze casts using the lost wax process , in which a moist, heat-resistant mass (e.g. clay) tightly envelops a wax plastic, which melts away when liquid metal is poured in and is replaced by the cooling ore . This technique allows the finest detailing and any form of perforations and undercuts.

Since the Renaissance, wax has been chosen as a material for bozzetti , small three-dimensional design sketches. Since wax is particularly suitable for reproducing the skin surface in a deceptively similar manner, it was obvious to use it for portrait busts (e.g. wax busts of flora ), as can also be demonstrated by important artists. For the same reason and since the same time, anatomical specimens have also been made from wax. In the 18th century a separate profession, the wax boss, was dedicated to this art. The first wax figure cabinets were created . For folk art include plastic votive offerings of wax.

While only a few incidental works of carving in wood and bone have survived from the early advanced cultures, the situation is much better with sculptures made of ceramic material, which got its durability in the kiln . In terms of production technology, these materials can be shaped both in molds (hollow molds) and by free modeling. The Mesopotamian reliefs from the 6th century BC (e.g. the Ishtar Gate ) , made with models and covered with tin glaze, are famous . The unglazed pottery of northern India from the 2nd century BC has a smaller format.

The Chinese art of working in clay became particularly famous a few decades ago with the discovery of the terracotta army of the Qin Shihuangdis mausoleum (210 BC). In addition to this monumental complex of thousands of life-size statues freely modeled from clay , there were also smaller figures that were also used as grave goods . Many of them are hollow, molded and glazed series products, pressed in two halves of the mold.

A very similar manufacturing method and function is associated with the Tanagra figures popular in Greece in the 4th and 3rd centuries . Not all of them had the high quality of the detailed Aphrodite Heyl , a terracotta figure from the 2nd century BC. Chr.

There are comparatively few examples of clay sculptures from the Middle Ages . Significant but isolated altar figures were created in Central Europe around 1400 , while small-format devotional figures made of white pipe clay, a Rhenish specialty of the late Middle Ages, were mass-produced.

Compared to these unglazed examples, the Florentine clay sculpture is characterized by a white, sparingly colored tin glaze. Luca della Robbia and his workshop are the main representatives of this style. In addition to these “marketable” products, clay has been a popular raw material for making design models since the Renaissance. These bozzetti, with their ductus , which makes the artist's hand tangible, are rare and artistically valuable individual pieces.

A tradition of its own can be traced back to porcelain sculpture. China again preceded this, and figurative works had also been created here in the factories since the 13th century. In Meißen , where porcelain had been reinvented since 1708, figural goods were also brought onto the market from 1713. Johann Joachim Kändler in Meißen and Franz Anton Bustelli are the most important German sculptors of the 18th century in this technique. While the figures of Kändler and his contemporaries were mostly painted (decorated), Bustelli's works, like those of the classicist modelers, were often left white and were thus intended to be reminiscent of ivory and marble, an effect that was enhanced in biscuit porcelain by surfaces that remained unglazed. The early porcelain sculpture was created by molding individual parts that were put together and modeled together before the fire. Then, since the second half of the 18th century, a casting technique has been used: a thin liquid porcelain suspension is poured into a plaster of paris mold, the solid components of which lie against the mold as a thick layer and can be removed as a hollow structure for firing.

Sculptural work in metal uses very different techniques. In this way, a shape can be modeled from punched (" driven ") sheet metal. Small, decorative reliefs were created as well as monumental monuments, e.g. B. the Statue of Liberty , the Quadriga on the Brandenburg Gate or the Hermannsdenkmal .

A metal casting is created quite differently. In principle, casting is possible with all metals.

In the fine art foundry , a sculptor's model is required, which can be made of clay, wax, plaster or other materials. When casting, a casting mold is first made in the art foundries on the basis of the model designed by the sculptor, which is filled with the liquid metal in such a way that a hollow shape is created. Possible processes for the next step are the lost wax process and the so-called lost shape (see also sand molding process ).

Electroplating processes for the production of plastics share the need for an underlying model with casting technology, but the further process is completely different (see electroplating).

A technically unrestricted use of solid metals has been observed in metal sculpture for decades.