The 196.755 km² island belongs to the Cyclades archipelago and is located west of Naxos . Immediately southwest of Paros is the also inhabited island of Andiparos . Together with the numerous small islets, which are mainly southwest to north, Paros forms a municipality ( Greek δήμος , Dimos ) in the Cyclades prefecture. In the middle of the island there are two main peaks: the 771 m high Profitis Ilias (the old Marpessa, but mostly Agii Pantes on the maps), on the north side of which was the deposit of the precious marble not far from the monastery of Agios Minas, and south of it the slightly lower stroke boulas.

Paros is now a popular holiday island. There is a small regional airport connected to Athens by Olympic Airlines . The airport was expanded in the summer of 2016 and is now significantly larger than before.

After the founding of Greece in 1835, the island of Paros was initially subdivided into the four municipalities of Paros, Naoussa, Yria and Marpissa. After several area corrections were carried out in the following years, all parishes were downgraded to rural parishes in 1912 and Yria was renamed after its administrative seat Lefkes. Further area corrections led to the establishment of the rural communities Kostos and Archilochos in 1926, at the same time Marpissa was renamed after Tsipidos. When the rural community of Angeria was founded in 1928, the number rose to seven. The rural municipality of Paros received the status of a municipality in 1986. As a result of the territorial reform under the Kapodistrias program in 1997, the municipalities of the island were merged into the municipality of Paros. The previous communities remained as community districts. Since the administrative reform in 2010 , they have been given the status of a city district or local community according to their number of inhabitants.

On Saliagos , a small, uninhabited island between Paros and Andiparos, one of the oldest settlements in the Cyclades from the Neolithic was found.

The first traces of settlement on Paros itself date from the Bronze Age . A cultural stage of the Cycladic culture was named after the cemetery of Kampos . In 1898 Christos Tsountas published his excavation results of the settlement Pyrgos near the cemetery of the same name. They are part of the Kastri culture of the 24th to the 21st century BC. Assigned. In the Middle Cycladic period between 2000 and 1600 BC The Phrourion site was an early urban settlement. Today it is located in the old town of Parikia and is built over, so that so far only a section of 14 m × 19 m could be explored. He showed a street grid that is comparable to other settlements of the time in Phylakopi on Milos or Agia Irini on Kea . In the early 12th century BC The fortified settlement of Koukounaries was founded under the cultural influence of the Mycenaean mainland , but was destroyed by enemy action after a few decades. After a gap in the settlement it became from the first half of the 11th century BC. Inhabited again for some time and then abandoned.

According to legend, the island was said to have been built by Lelegern from around 1100 BC. Be inhabited by Ionians . The inhabitants achieved prosperity and prestige early on through trade and shipping and built from 684 BC. An island state on Thasos . In the 4th century BC They founded Pharos in the Adriatic Sea .

At the time of the Ionian uprising, the inhabitants of Paros were under the hegemony of the Naxians , then became independent again and defended themselves in 489 BC. With success against Miltiades . After the Persian Wars, however, the Parians had to recognize the supremacy of Athens and Paros was one of the most important islands of the Attic League , whose inhabitants paid the highest tribute, thirty talents .

After Alexander the Great , the island came under Egyptian rule, then again to Athens and finally to the Romans. In the 4th century AD there was a diocese on Paros, which was subordinate to the Metropolitan of Rhodes .

In the 9th and 10th centuries the island became increasingly deserted, which was mainly caused by the raids of the Saracens in the Aegean Sea. At that time, the Theoctiste , who had been kidnapped from Lesbos , lived on the island, where she found great veneration as the island's patron saint. In 1207 it became part of the Duchy of Archipelagos . In 1416, Duke Jacopo I. Crispo repelled a massive Turkish attack. His successor Giovanni II occupied Paros and tried to detach it from the duchy, but after several years of dispute with Maria Sanudo, a daughter of the Duke of Naxos , had to vacate the island on the orders of Venice . As a result, Paros came to the Sommariva family as a dowry . The Ottoman Sultan Bayezid II had the island attacked again, but he too was unsuccessful. In 1518 Paros fell to the sister of Crusino II, who died childless, and in 1520 she ceded her to her son Nicolo II from the house of the Venians . In 1531, when Nicolo died without leaving an heir to the throne, Paros passed to his brother-in-law Bernardo Sagredo, who was only awarded it by Venice after years of dispute. A year later, in 1537, Sagredo had to submit to the troops of the Turkish admiral Khair ad-Din Barbarossa after a short resistance and evacuate the island. The island was brutally looted, the residents either sold into slavery or relocated to the rest of the Ottoman Empire. However, the new rulers soon allowed the island to be repopulated and even granted privileges to renovate churches and build monasteries, such as the Christou Dasous monastery, south of Parikia.

Gradually the Ottomans lost control of the island; it became a haven for various adventurers and for a short time a base of operations for pirates . On July 10, 1651, the Ottomans were defeated at Paros by the Venetians under Lazzaro Mocenigo . From 1770 to 1774 during the Russo-Turkish War , the island was occupied by Russian troops . The island's population took an active part in the Greek struggle for freedom and finally came to Greece in 1830 . The famous Greek freedom fighter Manto Mavrogenous came from the island.

After the occupation of Greece by the German Wehrmacht in World War II , the Paros airfield was important for the occupiers as a base for the supply of troops on Crete. After a commando operation by the Greek resistance against facilities at the military airfield, 23-year-old Nikolas Stellas was publicly hanged on May 21, 1944 in the village of Marpissa . A memorial was erected for him in Marpissa after the occupants left in autumn 1944.

In retaliation for the deaths of two German soldiers, 125 male Greek hostages were also to be shot. However, the German island commander, Georg Graf von Merenberg , was persuaded by the abbot of the Longovardas monastery, Philotheos Zervakos, to let the hostages live. In return, the Greek resistance stopped its partisan actions against the German occupiers.

In September 2000 the Express Samina ferry sank off the island.

In Parikia, the capital of the island, there is one of the most beautiful churches in Greece, the Panagia Ekatontapyliani ("the one with the hundred doors"). According to tradition, it was built by Isidorus , one of the architects of Hagia Sofia , during the reign of the Byzantine emperor Justinian I. A special feature is the marble baptismal font in the former baptistery. In the complex church there are small chapels, which are dedicated to the two saints Cosmas and Damianos and the local saint of the island, St. Theoktisti.

The island was already famous in ancient times for its white marble ( Parian marble ). There is literary evidence of several sculptors who either lived on the island or who are believed to have come from here, including Skopas , one of the most important representatives of the late classical period and Agorakritos , a student of the famous Phidias .

From 1898 to 1900, the German classical scholar Otto Rubensohn conducted research on the island . Among other things, he excavated the remains of the sanctuaries of Asclepius and the Pythian Apollon southwest of Parikia.

There are many monasteries on the island, most of which were small family foundations. There was also a Jesuit and Capuchin monastery for a certain period of time. The majority of the monasteries are empty today, only five are still inhabited by monks or nuns. The best known are Longovardia near Naoussa , founded in 1638, and the Christou Dasous convent, which was donated by the Mavrogenous family in 1792 and is located southwest of the main town on the island of Parikia.

Nearby there is a butterfly valley known beyond the Cyclades (Κοιλάδα των Πεταλοδων), where tens of thousands of butterflies of the bear moth family live. 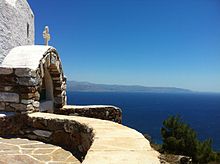 In Marpissa, near the now uninhabited monastery of Agios Antonios, the ruins of a former Venetian fortress rise up, where in autumn 1537 a young noblewoman of Italian origin, Cecilia Venieri, fell into the hands of the Turkish conqueror Barbarossa . She was later named Nurbanu as the wife of the Ottoman Sultan Selim II and an influential adviser to her son Murat III. known.