The term Saracens (from Latin sar [r] acenus ; probably from Arabic شرقيون, DMG šarqīyūn  'people of the east' in relation to the Semitic inhabitants of north-west Arabia, from Arabic شرقي, DMG šarqī  , east ') originally referred to one in the northwest of the Arabian Peninsula settled tribe . As a result of the Islamic expansion , the term was used in Latin sources and in Christian Europe as a collective term for the Islamized peoples who ruled the eastern and southern Mediterranean from around 700 AD , also under the impression of " piracy " emanating from them . Their representatives include: B. the ruling dynasties of the Abbasids , Fatimids and Zirids .

Female and male Saracen costume in a depiction from 1486

The Greek Sarakenoí ( Σαρακηνοί ), Syrian Sarkaye and Latin Saraceni referred to one or more nomadic tribes in the north-west of Arabia and on the Sinai Peninsula in late antiquity (second to fourth centuries) , based on the depiction of Ptolemy in the area of Nabataea . The origin and meaning of the term Saracen was previously seen differently. Ptolemy linked the term with the toponym Sáraka ( Σάρακα ), which on the one hand denoted a city in Arabia Felix , on the other hand a desert on the Sinai Peninsula (also Sarakēnḗ , Σαρακηνή ). Since the third century, the name has been used synonymously with Arabes Scenitae (gr. Σκηνῖται ), which in turn can be understood as "tent Arabs", but has no etymological connection with Sarakēnoí . Since the sixth century, Sarakēnoí in Byzantium referred to all Arabic-speaking peoples.

Among the etymologies that have been proposed in modern times, the most frequently encountered derivation of Sharqiyun ("Oriental") from Arabic, which emerged in the 18th century شرقي Sharqi , DMG šarqī  'east, oriental, Orientale', from which the Arabic name for the Orient , al-Mašriq , is derived. In addition, a derivation from the Semitic root šrkt "tribe, confederation" was proposed.

The theologian and Arabist Günter Lüling has resumed the medieval connection with the Old Testament Sarah , the wife of Abraham and archmother of Israel, and assumed a meaning "fighter Sarah" by putting the word component -kenós to Greek kónein (κόνειν) "to fight" and the word for a synonym of Hagarener ( Hagarenoi ) held, another name derived from the Bible for the Arab tribes.

The meaning has been gradually expanded since late antiquity , first to the other Arab tribes of the pre-Islamic period ( Eusebius , Hieronymus ), then in the course of the armed conflicts with Moorish and Arab armies in Europe to the Islamic peoples par excellence. In this expanded sense, the word has been adopted from Greek and Latin into the European vernacular since the time of the Crusades .

The use in Christian literature was characterized by a learned folk etymology that disparaged the designated peoples . Already in Hieronymus and Sozomenos , i.e. in pre-Islamic times, the word explanation appears that the Agarenes (or Hagarenes), the descendants of Hagar , the rejected slave and concubine of Abraham , wrongly called themselves “Saracens” in order to be descendants of Sarah to spend as Abraham's free wife and wife, thereby enhancing oneself. This word explanation, which the Saracens interpreted as disguised Agarenes, and thus in connection with the Pauline interpretation of the Old Testament theme ( Gal 4,21–31  EU ) as a member of a people who had been cast out by God in terms of salvation history, has been used by Christian authors of the Middle Ages since the rise Islam became an anti-Islamic topos , which gained further dissemination in European literature on the Crusades and Islam.

The Romance term Saracenus for the Arab conquerors of Spain found its way into Hebrew as Sarqy . 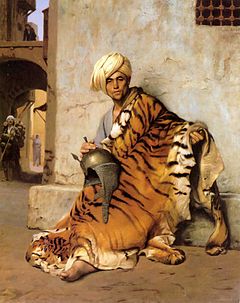 The word saracenus and its vernacular equivalents have in the course of their medieval development of meaning, in addition to the primary ethnic or religious meaning “belonging to Islamic peoples”, also partly assumed the additional meaning “ pagan ” or generally “strange, old” (for example in terms of buildings or ruins Roman antiquity as "Saracen", hence the English sarsen (stone) for megaliths in prehistoric monuments), and in certain contexts the transferred meaning "black, dark". In terms of linguistic and factual history, it is therefore often difficult or only based on the respective context to decide whether a given usage is based on the primary or a secondary meaning.

When at the beginning of the 15th century groups of Roma , originally from India, who immigrated via Byzantium and the Balkans, first appeared in Romansh and German-speaking countries and were perceived by the local population as members of a foreign, dark-skinned people from the East, next other terms such as “Egyptians”, “ Gypsies ” (both of which have already been introduced in Byzantine usage), “pagans” and “ Tatars ”, the term “Saracens” is sometimes used for Roma, mainly in Romance languages ​​and under their influence in the 15th Century also in German.

Especially in France and Switzerland, the family name Sarasin or Sarrasin or Sarazin, Sarrazin (from Middle High German Sarrazîn ) is widespread, in German-speaking Switzerland also Saratz , in Italy and Italian-speaking Switzerland Saraceno , Sarraceno, Saracino, Sarracino or Saraceni , Sarraceni in English the from the French or Anglo-Norman still evolved form Sarson . The forerunner of such names in the Middle Ages is a name or surname Saracenus , which has been documented in Latin sources since the eleventh century , in many cases because of a "Saracen" origin of the bearer, in other cases only because of a temporary stay with the "Saracens" or, like Latin Maurus , North French. Moreau , engl. Moore was created to highlight a particularly dark skin or hair color. If the name only came into use in the late Middle Ages, there is also the possibility that it was chosen in view of the possible meaning "gypsy".

Currently the most famous name bearer in Germany is the former Bundesbank board member and SPD politician Thilo Sarrazin .

Since "Saracens" (i.e. Moors of predominantly Berber origin, they camped between approx. 890 and 970 in the area around Fraxinetum ) during the ninth and tenth centuries also occasionally made trains across the Western Alps to Switzerland, where they - via the hospice on the Great St. Bernhard  - came as far as Chur and St. Gallen , among other places , in later times people wanted to associate some Swiss place names with such "intruders". Also in those cases in which such a toponym can actually be derived from the name of the Saracens - such as in the case of Pontresina (1137–1139 as pons sarasina , 1303 as ponte sarracino ) and the Bisse de Sarrazin aqueduct in the Valais Vercorin  - It should be noted, however, that in the background there can also be a personal name of the eponymous builder or owner that is not or no longer ethnically determined, or a more general meaning such as "strange, old". The Historical Lexicon of Switzerland writes: "The Arabic etymology of some Valais place and mountain names that has been postulated over and over again is hostile to linguistic research."

Buckwheat is called “Saracen grain” in the Romance languages (French blé sarrasin , Italian grano saraceno , Spanish trigo sarraceno ), which originally came from China and was introduced to the Europeans as a cultivated plant by the Tatars (in Germany for the first time in 1396 documented). The fact that the name is primarily to be understood in the sense of “Korn der Saracenen” (cf. Latin frumenta sarracenorum , 1460) and thus refers to the origin of a foreign, pagan people, is borne out by comparable terms in German (middle high d . Heidenkorn , southern. Austria: Haid, Heid, Hoad and Heidensterz ) and in Eastern and Northern European languages ​​( Bohemian tatarka or pohánka from Latin paganus , slk. Tatárka, pohánka , Estonian tatar , Finnish. Tattari ). The Romance name could also be motivated secondarily by the dark color of the buckwheat fruits (cf. French blé noir , Italian grano nero , German Black Welschkorn ).

The origin is unclear the use (aristolochia) sarracenica (16th century?, Tabernaemontanus ), French sarrasine (1611 with the English translation "Heatwort, or Birthwort"), Germanized Saracenkraut (18th century, Johann Leonard Frisch ) for plants from the family of the easter plants . Senecio sarracenicus is the botanical name of the river ragwort .

The scientific Latin name for the common American family of the Pitcher plants , Sarraceniaceae , as well as that of belonging to this family genus of pitcher plants or trumpet plant, Sarracenia or plural Sarraceniae , are each derived from the name of the French-Canadian botanist Michel Sarrazin (1659 -1734).