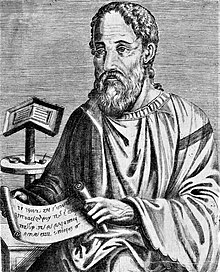 Eusebius of Caesarea, fantasy portrait of the 16th century

Eusebius of Caesarea (* 260/64 in Palestine ; † 339 or 340 in Caesarea ; ancient Greek Εὐσέβιος ὁ τῆς Καισαρείας , German 'Eusebios von Kaisareia' , Latin Eusebius Caesariensis ) was a late antique Christian theologian and historian. His works are one of the most important sources for early church history. Eusebius is therefore referred to as the “father of church history ” and counted among the church fathers .

Not much is known about the origin of Eusebius, he was probably born in the Roman province of Palestine . He was a pupil and collaborator of the Pamphilus of Caesarea - a church leader in Caesarea in Palestine - about whose life he wrote a vita in later years, which was only given in quotations . Because of his, probably also in economic terms, close relationship with Pamphilus, he was assigned the distinctive ὁ ΠαμφΠλου or Eusebius Pamphili ("Eusebius des Pamphilos") as a writer , which he apparently adopted for himself. Eusebius made intensive use of the extensive library of Pamphilos, from which he was instructed in the philological handling of Christian texts.

During the Diocletian persecution began in the Eusebius already with his scholarly activities, Pamphilus and other Christians in Palestine suffered Tire and Egypt , the martyrdom . The name of St. George , a Roman officer who suffered martyrdom on April 23, appears for the first time in Eusebius. In his work On the Palestinian Martyrs , Eusebius gives a vivid picture of this time.

After the Diocletian persecution ended, he was elected Bishop of Caesarea around 313 . Little is known about the following years. In the Arian controversy he played no clear role. So he defended Arius against the bishop Alexander of Alexandria and only signed the Nicene symbol and the anathema against the Arians with reservations at the first council of Nicaea in 325 . Excommunicated shortly beforehand by a synod in Antioch , Eusebius appeared before the council and was there recognized by Emperor Constantine as orthodox after submitting his creed .

In the following years Eusebius was repeatedly victorious against his internal church opponents in Syria and Palestine. So he headed the Synod of Tire in 335 , which excommunicated Athanasios of Alexandria . After Constantine's death, Eusebius lived only a short time; he died in 339 or 340.

While Eusebius' importance was reduced to his historical works for a long time , his theological profile also comes into view in more recent patristics . At first he took the side of Arius , but distanced himself from his anti-Trinitarian top statements during and after the Council of Nicaea . He is thus a representative of a middle position that teaches in a trinitarian way, but following the theology of Origen in a subordinate sense. Like Origen, he started from the basic idea of ​​the absolute sovereignty of God. So for him God was the origin of all that was created. But Christ was begotten for him by God, not created, so that Christ was for Eusebius from God, but to be distinguished from him like light from his source. He thus represented subordinatianism .

Eusebius was a pragmatic thinker and a very well-read scholar who apparently relied on extensive source material. He had access to many sources, public archives , church libraries and even private collections (for example, he continued to expand Origen's library) that are no longer preserved today. His numerous quotations from it are historically valuable. In addition, he reported personal experiences and reports from eyewitnesses. These descriptions are not neutral by today's standards, but neutrality in the modern sense was not the main objective of ancient authors. Nonetheless, Eusebius intended to describe how it happened, and he viewed his material quite critically, although at times he proceeded selectively.

In order to understand his works, which are written in Greek, it is important that he was not interested in a history of the church that was still in the making, but rather a representation of the existing one, which he wanted to place in the wider context of world history. Here eschatological expectations also played a role. For Eusebius, the rule of Constantine and the Constantinian turning point signified the beginning of a time of salvation and peace.

The time when the chronicle and church history were written is controversial in scholarship, but it is certain that a version of both works was first made, which Eusebius later revised and completed to its final version. Both works established the fame of Eusebius among later authors. He wrote his biography of Constantine towards the end of his life; it does not seem to have been edited.

For centuries his chronicle has been valued as the source of all synchronistic historical knowledge, but no originals have survived today. The first part of the chronicle contained a collection of chronologies of different peoples that extended up to the year 325 AD , which in critical form formed the basis for the second part. Book 1 is almost completely preserved in the Armenian version from the sixth century AD. Based on this, Josef Karst prepared a reliable German translation. Research has discussed how accurately the Armenian version reproduces the Greek original, but it is considered a fairly reliable version. The second part of the chronicle (the canons ) offers a historical overview in tabular form from “Creation” to 325, including a chronology of reigns and Olympiads. Hieronymus later only translated Book 2 into Latin , dispensing with Eusebius' source-critical introduction in the Armenian language. It is important that Eusebius, who consulted numerous sources, also had access to works, some of which are no longer preserved.

In his main work, Church History , Eusebius described the history of the emergence of the Christian Church up to 324 in ten books. The information on the authenticity of the biblical writings and the numerous early extra-biblical evidence for the historical confirmation of the biblical Jesus are of great importance. Especially in the last three books, he provides a rich documentation through his own research. However, only what fit into his picture was recorded. He paid careful attention to the internal conception of the work. As an Origenist, he dedicated most of an entire book (VI 2–36) to the controversial Origen . Eusebius is the main source for Origen's writings. He collected hundreds of Origen's letters, but some are of questionable origin.

His church history had a considerable aftereffect and was later continued by Socrates Scholastikos , Sozomenos , Theodoret of Cyrus and Euagrios Scholastikos . Rufinus of Aquileia freely translated them into Latin .

After the death of Constantine, Eusebius dedicated his four-book work, The Life of Constantine (Vita Constantini), to him . It is an openly partisan eulogy of the deceased emperor, which should serve as a model and warning to the future rulers in view of the impending conflicts within the church. The authenticity of the inserted documents, once questioned, is now largely recognized, so that the work conveys important information despite its tendentious character.