Tire is a redirect to this article. Further meanings are listed under Tire (disambiguation) . 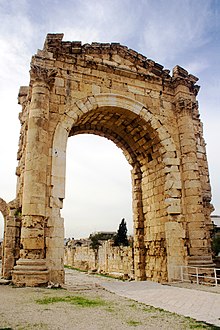 Remains of an ancient triumphal arch

Tire ( Latin Tire ; Arabic صور, DMG Ṣūr from Phoenician “rock”, because of an offshore cliff) is a large city in Lebanon with around 117,100 inhabitants. It is located in the south of the country on the Mediterranean coast. Ancient Tire, located on a small island, was one of the most important cities of the Phoenicians .

The rise of Tire began in the middle of the 2nd millennium BC. Tire had its heyday as a trading metropolis from the 20th Dynasty of the Egyptian New Kingdom in the 12th century BC. The trade from Tire and other Phoenician cities covered the entire Mediterranean basin. Areas on the other side of the Strait of Gibraltar , the so-called " Pillars of Heracles ", were approached early on, as was the case with Phoenician finds from around 900 BC. In Huelva . For the Canary Islands there is at least one Punic- Carthaginian settlement near Teguise from the 6th century BC on Lanzarote . A very early 14C date from this site could even be traced back to Phoenician contacts as early as the 10th century BC. Point out. It is controversial whether Great Britain has already been reached by seafarers from Tire. The northernmost known Phoenician trading post on the Atlantic was in any case Abul (approx. 50 km southeast of Lisbon ); Phoenician finds, some of which may have been found in the 9th century BC. BC, came to light further north, in Santa Olaia . Trade relied on a large number of trading posts on the coasts. Permanent settlements and colonies were only established in exceptional cases, especially in North West Africa, Sardinia and the Iberian Peninsula . The most important foundation was Carthage , according to legend in the year 814 BC. By the Tyrian king's daughter Dido .

Tire was able to maintain its political independence mainly because the previous great powers, the Egyptian New Kingdom and the Hittite Empire , were weakened or destroyed and initially no other great power could fill the power vacuum.

In the Bible , Tire appears in the following relevant places:

According to a Masonic legend about the construction of the Solomonic Temple in Jerusalem, Hiram Abif was sent as a delegate by Hiram I , King of Tire.

With the resurgence of the Assyrian Empire , Tire had to pay tribute and increasingly lost its political independence, but not its economic power. However, the Phoenicians' rule of the sea began in the 8th century BC. Increasingly pushed back by the ancient Greeks .

858/857 and 856/855 v. Chr. Received Sulmanu-ašared III. the tribute of Tire. The historian Brad E. Kelle wants to see that this was not mentioned for the year 853 as an indication that the city was involved in the alliance of Ben-Hadad II of Aram , Irhuleni of Hama and Ahab from the northern kingdom of Israel against the Assyrian Empire was and provided troops for the battle of Qarqar . In the 18th year of reign (841/840 BC) Šulmanu-ašareds III. the tribute of Tire was mentioned again.

The vassal contract between Aššur-aḫḫe-iddina (681–669 BC) and the city god of Tire contains a precise description of the territory of Tire and various regulations:

These rules are followed by the usual curses in the event of breaking the oath:

Both the supreme gods of the Babylonian religion and local gods and gods of Assyrian mythology were invoked.

A stele of the Aššur-aḫḫe-iddina from 672 BC. BC from Sam'al , today's Zincirli shows how he holds the tiny kings of Tire and Egypt on ropes that are attached to the nose rings of the subjugated.

Nabū-kudurrī-uṣur II (better known as Nebuchadnezzar II) was unable to storm the city even after a thirteen-year siege. It surrendered in 568 BC. After that, Nabu-kudurri-usur installed Ba'al II as the new king, who lived from 568 to 558 BC. Ruled. Ration lists from the 10th to 35th years of Nabu-kudurri-usurs mention aristocrats and craftsmen from Tire. These are likely to have been hostages and deportees. Tyrian traders in Babylon have been handed down from the 40th year of Nabu-kudurri-usur . After Ba'al's death, Tire became known from 558 to 551 BC. Ruled by judges, the conditions were apparently very unstable. Presumably during this period of weakness, Tire also lost control of his colonies Kition in Cyprus and Carthage in North Africa. In the first year of Nabonidus a king who had been brought up in Babylon was reinstated, presumably a descendant of the old rulers. Tire then belonged to the Persian Empire and, like the other Phoenician coastal cities, had a relatively independent position. The Phoenician coastal cities provided the Persian fleet.

Around 333 BC Chr. Was Azemilcus king of Tire. At the news of the Persian defeat in the battle of Issus , Azemilkos sailed to Halicarnassus under the orders of the Autophradates . In Phenicia, Alexander the Great conquered the ports of Arados , Marathos , Tripoli , Byblos and Sidon without resistance . Tire had also offered to negotiate, but Alexander refused to sacrifice in the temple of the city god Melkart in New Tire, that is on the island. They simply offered him to enter Old Tire on the mainland. In fact, this meant that they were trying to remain neutral or to evade direct Macedonian control. When Alexander insisted on occupying New Tire as well, the city was besieged ( see Siege of Tire (332 BC) ). It began in January 332 BC. And lasted seven months. Alexander had to build two dams from the mainland in several months of work in order to take the island city. For this he used pillars made of Lebanon cedar and the buildings of the old town. After archaeological investigations, it was also able to build on an incomplete previous building Nabu-kudurri-usurs. The geological conditions of the alluvial edge also suited him. Siege engines could be set up on the dam. Ships from Sidon, Byblos, Arwad and Cyprus took part in the siege. Tire fell in the autumn of 332 BC. The ships from Arwad took the south port, the Cypriot ships entered the north port and the crews were able to occupy parts of the city walls. King Azemilkos had fled with the sufets and the ambassadors from Carthage to the temple of Melkart and was spared by Alexander while he had 2,000 men crucified (Diodor) and 13,000 ( Diodor ) or 30,000 ( Arrian ) residents sold into slavery. The rest managed to escape to Carthage. Alexander celebrated his victory in the city's Melkart temple, where he solemnly consecrated the battering ram, which was the first to blow up the walls, and the sacred Tyrian Melkart ship, which he had captured earlier, to God. The city was rebuilt and was the main Macedonian port on the Levantine coast.

“From Alexander d. Size incorporated into the empire after the conquest, the city remains autonomous (new era 275 begins). Even under Roman rule (from 64 BC) T. flourished as an independent city (own coins) for a long time, around 200 AD T. became the capital of the province of Syria Phönice ”.

The excavations in Tire, especially in the last 20 years, uncovered hundreds of Greek inscriptions, some of which are well preserved. They originated between the 3rd century BC. BC and the 8th century AD, that is, from the conquest by Alexander the great to the Muslim conquest. The major events are hardly reflected in them. The inscriptions say something about daily life and the social and cultic institutions. Probably the oldest Greek inscription is carved in red granite. The inscription honors Ptolemy IV of Egypt at a time when Tire was the subject of a dispute between the Greek pharaohs in Egypt and the Seleucids . The inscription helps to better understand a passage by the Greek historian Polybius .

Several larger structures were built by the Romans , some of which are still preserved today. The city was probably the birthplace of the famous Roman lawyer Domitius Ulpianus (D.50.15.1pr). The Eastern Roman period lasted until the Battle of Yarmuk . After that, Tire was conquered by the Arabs.

In 1089 the city was conquered by the Seljuks , but soon fell back into the dependence of the Fatimids . After having withstood a siege by the Crusaders in 1112 , the city was conquered by them on July 27, 1124 and added to the crown domain of the Kingdom of Jerusalem . It also became the seat of an archbishop. After the fall of Jerusalem to Saladin (1187), the throne was moved to Acre while the deliberations were held in Tire. The city withstood a siege by Saladin in 1187. A little later, Tire was converted into its own rule . The remains of the Roman-German Emperor Friedrich I Barbarossa († 1190), who died during the Third Crusade , may have been buried in the Cathedral of Tire . On May 19, 1291, the Mamluks conquered the city. To this day, the Archdiocese of Tire is a titular archbishopric of the Roman Catholic Church .

The world of gods

The oldest written evidence of the Tyrian gods can be found in 676 BC. Treaty concluded between the Assyrian king Asarhaddon and the Baal of Tire. The three gods who guarantee the contract on the part of Tire are Baalschamin, Astarte and Melkart (king of the city), who is later invoked as Baal Sur (lord of the rock - on which the city is built). Flavius ​​Josephus equates these gods with Zeus , Aphrodite and Heracles .

It is also reported that Hiram of Tire, who appears in the OT of the Bible as a contemporary of Solomon , built the temples for these three gods. Coin images from Roman times show u. a. Aphrodite- Tyche with a wall crown. A Victoria and a Tropaion are shown next to her . Other coins show a tree, a fire altar and two batyloi , which are called "ambrossie petre" (divine rocks). The poet Nonnos of Panopolis mentions a burning olive tree and Herodotus mentions two meter high stelae made of gold and emerald as temple furnishings. The furnishings of the temple, which Tyrian seafarers built in Gades , Spain , consisted of a golden olive tree , a fire altar and the baetyl made of gold and silver alloys .

The oldest picture of Melqart can be found on a stele of Bar-Hadad (King of Aram) in Aleppo from the 9th century BC. BC, on it the god is depicted with a double ax . The birth of the constantly reborn vegetation or fertility god is depicted on a pond relief. A horned doe suckles the child, next to the mother's bed, towered over by an eagle, and a tree with burning leaves. Texts often mention him as the son of Aphrodite and Baalschamin. The egersis installed by Hiram (a kind of passion play), at least according to Christian sources, reproduced the death, the burning on a stake and the resurrection of this god. Something similar is reported about the gods Adonis and Eschmun .

Today mainly ruins from Roman times have been preserved, the remains of a gigantic hippodrome and the necropolis at the gates of the old city. In 1978 Israel invaded southern Lebanon and destroyed parts of the city as part of Operation Litani . In 1982, Israel intervened in the Lebanese civil war and conquered the southern part of the country. During the Israeli invasion , about 50% of Tire's houses were destroyed by Israel and about a third of the 60,000 inhabitants lost their homes. In 1982 and 1983, there were bombings on Israeli army facilities. In 1984 the ruins of Tire were added to the UNESCO World Heritage List . Large parts of the city are also protected cultural property according to the Hague Convention for the Protection of Cultural Property in the Event of Armed Conflict .

During the Lebanon conflict in summer 2006, Tire was bombed several times by the Israeli air force and suffered severe damage. Many international journalists, such as Antonia Rados , reported on the conflict from Tire at the beginning of August.

There have been several Palestinian refugee camps near the city since the late 1940s : Al-Bass, ar-Raschidiya (with around 25,580 residents) and Burj al-Shemali .