The title of this article is ambiguous. Further meanings are listed under Adonis (disambiguation) .

Adonis, Roman torso, restored and completed by François Duquesnoy , now in the Louvre in Paris 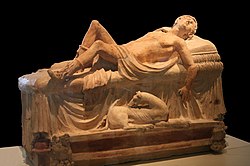 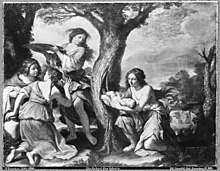 "The Birth of Adonis from the Myrrh Tree", attributed to Guercino . Dresden, State Art Collections Dresden

Adonis ( ancient Greek Ἄδωνις ) is a figure from the Near Eastern , Greek and Roman mythology and was originally probably a Syro - Phoenician vegetation god .

Presumably the figure of Adonis comes from the Semitic-speaking area, because his name is derived from Northwest Semitic Adon "Lord". According to another opinion, he is originally a Phrygian deity, whose myth was spread around the Mediterranean early on. It is also very similar to the Inanna / Dumuzi myth. In Etruria , where he was often depicted as the companion of Turan , Adonis was known under the name Atunis .

Venus on the corpse of Adonis, copper engraving after a painting by Guercino

In Greek mythology , Adonis is the symbol or god of beauty and vegetation and one of the lovers of Aphrodite (or her Roman equivalent, Venus ). He is described as a beautiful young man. Since Adonis is a descendant of Pygmalion and his relationship with the incarnate image of Aphrodite comes from, the subject of inbreeding in humans comes up again here . However, Aphrodite had to share her love with Persephone . Zeus decreed that Adonis should live with Aphrodite or Persephone for the third part of his time. He was free to dispose of the remaining third. According to legend, Aphrodite turned his blood falling on the ground into an adonis when the jealous Ares (or its Roman equivalent Mars ), who had turned into an angry boar, killed him. From every drop of blood an Adonis rose ( Anemone spec.) Is said to have grown, from every tear shed by Aphrodite a flower that colored the blood of Adonis blood red.

There are many different versions of this myth in which Adonis dies without uniting with Aphrodite and his blood turns red flowers or a river in spring. Instead of Ares and Mars, Apollo also appears in some myths.

All of these myths deal with unfulfilled love, death and resurrection and may contain traits of belief in a life-giving mother goddess .

There are different versions of the ancestry of the Adonis:

Ovid , William Shakespeare and others worked on this legendary material:

The Adonis complex is named after Adonis as a symbol of an ideal of beauty . On the other hand, the German name early Adonisjungfer for Pyrrhosoma nymphula refers less to their shape than to their coloration - similar to blood-red flowers of Adonis roses like Adonis aestivalis .