This article deals with the mythological figure. For more meanings, see Persephone (disambiguation) .

Triptolemos and Kore, Tondo a attisch - rotfigurigen shell of Aberdeen Painter , v to 470/60. BC ( Louvre , Paris )

Persephone ( ancient Greek Περσεφόνη Persephónē ) is a dead , underworld and fertility goddess in Greek mythology . In Roman mythology it corresponds to Proserpine .

She is the daughter of Zeus and his sister Demeter and often bears the name Kore ( Κόρη , actually "girl", but in this case specifically "daughter") or Kora .

Today it is assumed that the oldest form Περσόφαττα is a compound of pertho , destroy, and -phatta , related to the Vedic parsha "sheaf", and has the meaning "those who strike the sheaves" (who thresh the grain). 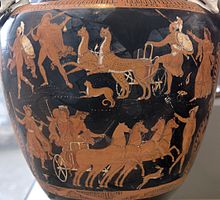 Rape of Persephone. Below Hades and Persephone on the quadriga , Hermes to the right . ( Persephone crater , Berlin Collection of Antiquities )

Her own father Zeus fell in love with Kore. In the shape of a snake he crawled into her and fertilized her. She gave birth to Zagreus , who was to become Zeus' successor.

The central myth of Persephone appears for the first time in the Homeric hymn for Demeter . It is reported that Hades , god of the underworld and brother of Zeus, fell in love with Kore. He therefore asked Zeus for Kore as a wife. Knowing that Kore would not willingly go to the sunless underworld, Zeus neither agreed nor refused. Hades interpreted this as consent. When Kore was picking flowers on the plain of Nysa , Hades rose from the underworld and kidnapped Kore on his team. Their cries for help were ignored by Zeus. Kore, now referred to as Persephone, submitted to her fate. Her mother Demeter was now wandering about in despair and in her grief prevented all plants from growing, which Zeus forced to intervene, since there was a danger that the whole world would perish of hunger. Eventually an agreement was reached that Persephone would only spend part of the year in the underworld. Accordingly, it comes to winter when Kore rules as Persephone in the underworld, and summer when Kore lives with her mother.

In the Theseus saga, Theseus and Peirithoos try to free Persephone because Peirithoos wants to marry her. The project fails, whereupon Theseus is rescued from the underworld by Heracles , while Peirithoos remains behind. 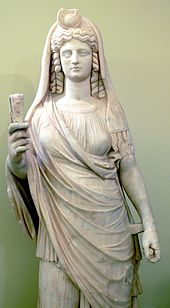 The meaning of the myth is an allegorical representation of the cycle of the seasons. In the Eleusinian Mysteries , the myth was understood as the image of a higher idea, namely the immortality of the soul, and was celebrated every year with a festive occasion. According to Orphism , she sits veiled on a chair in Hades and has a wreath of poppies on her head.

Persephone is closely related to her mother Demeter. In addition to Eleusis , she was usually venerated with her in Boeotia , the Peloponnese and Sicily . Among the Orphics of later times, Persephone is an all-ruling nature deity and is often confused with other mythical deities, Hecate , Gaia , Rhea , Isis . She was depicted together with Hades, as the daughter of Demeter or as the strict wife of Hades, with royal insignia and the torch, the symbol of the Eleusinian consecrations. In particular, it is often difficult to determine whether a representation of the Demeter or the Kore is available, since their ideal types are practically identical, only that Kore is always perceived as more youthful.

In one group she formed Praxiteles , in a relief (together with Hades, Dionysus and two nymphs ) Kolotes . It occurs more often in larger representations, especially in descriptions of the sending of the triptolemus , their abduction by Hades and their return to earth. The Roman sarcophagus reliefs treat this object with preference , but the robbery of the kore was also the subject of a painting by Nicomachus . The ascent of Persephone from the underworld is beautifully depicted on a vase painting (fragment of the Marchese del Vasto). In Roman times, their union with Dionysus (as Liber and Libera ), the bridal procession of both, accompanied by bacchanically frenzied satyrs and maenads, is very often treated on sarcophagi.

In modern times there are adaptations of the subject of the robbery of Persephone by Albrecht Dürer (1516), Rembrandt van Rijn (1631) and Peter Paul Rubens (1636), as well as a very well-known painting by Dante Gabriel Rossetti (1874) in which she appears as a melancholy figure holding a bitten pomegranate in her left hand.