The title of this article is ambiguous. Further meanings are listed under Sarcophagus (disambiguation) .

Battle of the ships off Troy, Attic sarcophagus, Archaeological Museum of Thessaloniki , second quarter of the 3rd century

A sarcophagus (from ancient Greek σαρκοφάγος sarkophágos "carnivorous") is originally a stone coffin . In common usage today, coffins made of metal or other durable materials are also referred to as sarcophagi, especially if they are accessible in tombs or churches and, in contrast to wooden coffins, are intended for permanent preservation.

The word sarcophagus is made up of the two Greek terms σάρξ sárx "meat" and φαγεῖν phagein "eat" ( aorist for ἐσθίω esthío ). It literally means carnivorous and is used as an adjective by animals such as B. birds of prey used. In Hellenistic and Roman period referred λίθος σαρκοφάγος Lithos sarkophágos (literally "carnivorous stone") one at Assos in Troas broken Limestone ( alum ) to which the property was said to buried corpse within 40 days - with the exception of the teeth - decay to to let. That is why one liked to lay coffins with this stone or made the coffins entirely from it; such a coffin itself was called σαρκοφάγος , whereby the noun σορός sorós "coffin" was usually left out. The adjective was later used generally for stone coffins.

The Egyptian sarcophagi are mostly made of limestone , less often of basalt or other materials. The oldest finds date from the time of Djoser and there are sometimes hieroglyphics and relief images of goddesses both inside and outside .

The sarcophagi of Phoenician origin are similar . Among these there are also sarcophagi made of red or blackish stone, in which kings and priests were buried. Some of these sarcophagi have a recess for the head of the deceased.

Also in the Cretan culture it was customary since the pre-palace period to bury the deceased in sarcophagi, first made of wood and later of terracotta ; the dead were buried in an assembled position, so to speak “folded”. A distinction is made between the inside and outside painted tub sarcophagi and the box sarcophagus that is only decorated on the outside.

In Greece stone sarcophagi were not common in ancient times. They used containers made up of individual bricks or clay slabs. In the brick walls of the tombs, the body was placed in wooden coffins that were still found in the graves of the Crimea . In Etruria , the so-called ash boxes were used in place of the sarcophagi , small colorfully painted urns made of clay or alabaster , with reliefs on the front, which were usually decorated with the whole, stored figure of the deceased on the lid.

In Pliny states: "In Assos in Troy is the stone sarcophagus, cut with fissile cores. The bodies of the deceased placed in it are, as we must know, consumed to the teeth within 40 days ”. Usually the coffins were lined with alunite to transport the decomposition . Such coffins still stand on pedestals near Assos . Juvenal mentions the burial of Alexander the Great in a sarcophagus.

From then on, the actual sarcophagi appear in Greece. At the beginning there are quite large, box-like containers made of marble , which are mostly architecturally structured in the form of temples, with a gable roof as a cover and the reliefs on the side walls are still monumental .

From this the Roman form of the sarcophagus develops , which is on average smaller and provided with more abundant relief decoration. The scenes on it are mostly taken from mythology , but often also have a reference to the activity, the characteristics and merits of the deceased. Although these are mythical figures, they are often given the portrait of the buried and his wife.

Numerous sarcophagi were found in the Roman provinces with only simple or no relief decoration. Rock investigations suggest that these very simple specimens were probably often made from regionally occurring types of stone. 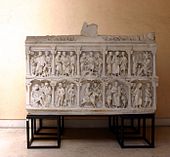 Christianity adopted the custom of burial in sarcophagi. In the last third of the 3rd century, motifs from the Old and New Testament appear on stone coffins for the first time. One of the most important representatives of Christian sarcophagi is the copy made in the middle of the 4th century for the Roman city prefect Iunius Bassus Theotecnius .

Sarcophagus burials are known from Palestine. Individual members of parishes in Rome also used sarcophagi, for example a menorah was used as an ornament .

Many ancient sarcophagi were readily used for Christian burials well into the late Middle Ages . Charlemagne was buried in the well-known Proserpine sarcophagus perhaps when he died in 814, perhaps only after his bones were uncovered (1165) . The sarcophagus has been empty since its bones were raised in the Karlsschrein (1215) and is now on display in the Aachen Cathedral Treasury . The Greco-Roman myth of the “ Rape of Proserpine ” is depicted on the front and both sides . Ancient sarcophagus reliefs gave high medieval and modern sculpture the first impulses for a new upswing.

In regions with a Romanesque population, the custom of laying burials in sarcophagi is still known in post-Roman times. In addition to rectangular stone coffins, trapezoidal specimens are often observed. Early medieval sarcophagi are often undecorated or have simple ornaments.

“The stone Severi sarcophagus in Erfurt keeps the relics of a holy bishop. A fenestella [little window] in the side wall provides a glimpse into the monument. […] The fact that a corpse was kept in a sarcophagus above ground always indicated the sanctity of the bones resting in it: because only the saints were allowed to keep them above ground. [...] A canonization did not take place in every case, as some examples show:

The phenomenon of sarcophagus burial above ground seems to allude to the saint-like status of the "righteous", which was also awarded to rulers and high church princes. "

For the analytical psychology in the tradition of Carl Gustav Jung , the sarcophagus is a manifestation of the nefasten aspect of the so-called mother archetype , i.e. the destructive and devouring mother.