The title of this article is ambiguous. Further meanings are listed under Juvenal (disambiguation) . 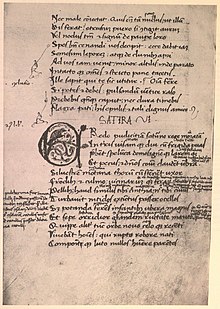 Decimus Iunius Iuvenalis (German Iuvenal or Juvenal ) was a Roman satirical poet of the 1st and 2nd centuries.

His exact life dates are not known. He was probably from Aquinum . One suspects a year of birth around 60 (58?) And a year of death a few years after 127 (138?). The news that Juvenal was banned after he published mocking verses against a dancer sponsored by Domitian is not certain . If the exile theory is correct, Juvenal was probably not only a victim of the comparatively mild relegation , but also a deportation , which also meant a loss of wealth and status. The place of exile was possibly an Egyptian garrison, which he was probably allowed to leave again after a pardon from Nerva .

His friend Martial does not refer to him as a poet, from which one can conclude that he only devoted himself to literary production in his middle years. Presumably it was only the death of Domitian in 96 AD that gave him the freedom he needed to express himself; his creative phase is likely to fall mainly in the time of Hadrian , to whom his seventh satire is addressed. 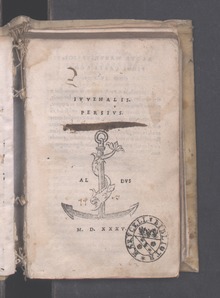 Sixteen satires ( saturae ) on various topics have survived by Juvenal , which offer an insight into the everyday life of the Romans in Domitian's time, although names and invectives against individual persons are largely absent. The authenticity of some of these works was at times doubted, but the attribution to the author Juvenal is now more likely to be certain.

In these satires, Juvenal criticizes various social conditions in a merciless and, in contrast to Horace, pessimistic, but linguistically and stylistically often brilliant criticism. Many catchwords and phrases that are still used come from his works , for example:

With his Saturae, Juvenal succeeds Horace and Lucilius , but his satires are significantly longer than the poems of these predecessors. Immediately after his death, he was rather forgotten. The basis of the Juvenal editions available today is an annotated edition from the end of the 4th century, but a more eager reception did not begin again until the Middle Ages, which Juvenal discovered as an ethic and school author and produced numerous Juvenal editions and commentaries.