This article is about a team of horses. For further meanings, see Troika (disambiguation) . 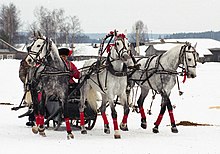 The Troika ( Russian тройка [ tr͡ɔjka ], three; pronunciation in English [troika] or [troika]) is a tension way for carts or carriages in which as in Dreispänner three horses or other draft animals walk side by side (a team with three horses in succession is Called random ). The troika is a type of trio that is particularly widespread in Russia and West Asia.

Orlov trotters are used for classic Russian troika tension . The agent horse walks under a Duga in the trot , the Galopins outer horses referred to fall sharply outwardly provided in the canter , the right in the left, the left the right lead.

Each horse wears a neck strap with bells and the harness is set with bells, so that a troika is seen by some as an instrument. The bells are not only used for jewelry, but also as a warning system that warns passers-by of the fast approaching, silent sledge. Peter the Great attempted to horn the troika sleds for this very reason. However, it was the more practical bells that prevailed.

The troika tension was also known in Germany through the song by Ivan Rebroff "With the Troika in the big city".

The term is also used in a figurative sense. Some leadership groups consisting of three people or institutions are or have been referred to as Troika (e.g. the EU Troika , a supervisory body of the European Union), see Troika (leadership) .

In the Stalinist Soviet Union , there were special courts consisting of three people , which were also called Troika, see Troika (NKVD) .