This article describes the quadriga form of tension; for other meanings of the same name, see Quadriga (disambiguation) . 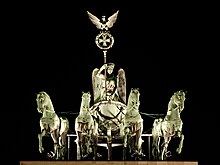 Quadriga on the Brandenburg Gate by Johann Gottfried Schadow 1793, executed by the coppersmith Emanuel Jury; Victoria, the goddess of victory, brings peace to the city on a team of four .

Museum of the tomb of Qin Shi Huangdi

Quadriga in the Parc de la Ciutadella in Barcelona

A quadriga ( Latin quattuor , 'four'), ​​also known in German as a four- in-hand car, is based on the ancient model, a two-wheeled chariot pulled by four draft animals , mostly horses , that are walking next to each other . In contrast, in a Vierspänner the horses in two pairs one after the other tensioned .

The four-team of the Quadriga developed from the two-team, the Biga . In the Biga two horses pulling a double yoke , the pole of the chariot.

In order to be able to harness four horses, two drawbars were attached to the outside of the wagon so that there was space for two horses between the drawbars. At each drawbar there was a pair of horses that pulled its drawbar with a yoke. Since two shafts are quite heavy and bulky, they went to the advent of pulling strings to using only one arm with the yoke to use and stretch the right and left of the two Jochpferde ever a by horse with strands. The pole horses are called "Jugales" after the yoke, the side horses are called "Funali". The tension cords often consisted of hemp ropes , as they are still used today for rural tension.

The harness consisted of a neck strap for the train (like a kumt ) and a waist strap that carries the yoke. The yoke is movably attached to the drawbar with a ring. The neck strap and waist belt are often connected with an ankle strap that runs from the waist belt between the front legs to the neck strap. The harness, especially the neck strap of the pole horses, was made wider and heavier than that of the companion horses. Rear harnesses were also used to stop the car (braking by the draft animals).

The quadriga is a common motif in art. A quadriga already appears in the Babylonian "creation myth" Enûma elîsch (IV. Panel, lines 50-58) as a war chariot of Marduk (approx. 600 BC). The quadriga was used primarily in ancient Rome in chariot races and triumphal procession and was often depicted in pictures and statues .

The goddess Eirene is often depicted as the driver in art . But you can also find Apollon as a driver in ancient art. The charioteer of Delphi can be named here, although only the reins on one hand indicate that the lost parts were such a team of four. 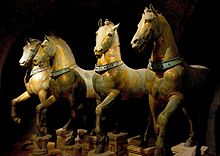 An authentically transmitted quadriga from antiquity is in the Museum of San Marco and a copy at St. Mark's Basilica in Venice ( horses of San Marco ). Another in the museum of the Qin Shihuangdis mausoleum from the Qin dynasty (221–207 BC; ancient Chinese ). The group of statues of the Quadriga created by Johann Gottfried Schadow on the Brandenburg Gate in Berlin, which was built by Carl Gotthard Langhans in the early classical style , is well known . The Semperoper in Dresden also adorns a quadriga created by Johannes Schilling , which, however , is drawn by panthers . The vestibule of the “ Alte Oper ” in Frankfurt is also adorned with a panther quadriga (1902). It comes from the sculptor Franz Krüger .

Ernst Rietschel's Braunschweiger Quadriga with Brunonia at Braunschweig Castle , executed by Georg Howaldt , was erected in 1863 and destroyed in a fire in 1865 and then again after the Second World War. Since October 23, 2008, a replica of the original Quadriga has stood on the central building of the reconstructed Braunschweig Castle.

Other well-known Quadriga statues are on the Wellington Arch in London , the Arc de Triomphe du Carrousel in Paris , the Monumento a Vittorio Emanuele II and Palazzo di Giustizia in Rome, the Soldiers 'and Sailors' Memorial Arch at the Grand Army Plaza in New York , the Austrian Parliament in Vienna and on the Munich Siegestor ( Bavaria steers a lion team).

Wikisource: The team of four on the Brandenburg Gate  - sources and full texts