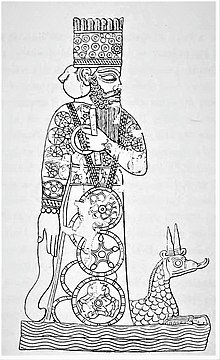 Marduk and Mušḫuššu - drawing after a Babylonian cylinder seal

Marduk ( Sumerian : DINGIR AMAR.UD 'Calf of Utu '; DINGIR TU.TU.eribu 'The setting sun', Ma-ru-tu-uk, Ma-ru-tu-x, Kassittish DINGIR Mar-duk, DINGIR mar (u) duk, Hebrew m (a) rodach, d En (BM 55466+ rev. 25 and 27), Seleucid also d Sú) was the city god of Babylon and later the main god of the Babylonian pantheon . His attributes were the Marduk dragon Mušḫuššu , often also referred to as the Marduktier, and the spade.

The god was also known as Bel (“Lord”) or Bel-Marduk in the Mesopotamian region .

Originally Marduk was a city god of Babylon. It first appeared in the 3rd millennium BC. As a Sumerian deity. When Hammurapi succeeded in exploiting the quarrels of the other city-states and forcing them under the rule of Babylon, he declared the Babylonian city god to be the supreme god of the pantheon . Accordingly, Marduk was already referred to as the son of Ea in the Codex Hammurapi . Marduk experienced his rise as supreme god beyond the city limits from the 2nd dynasty of Isin in the creation myth Enūma eliš . This describes how Marduk is chosen to be their head by the other gods. Thus Marduk took over the function of a multitude of gods, which was reflected in the 50 names of Marduk. Marduk took over the function of the previous divine triads An , Enlil and Enki or the quartet An, Enlil, Enki and Ninmach , which was due to the steadily growing influence of Babylon.

Although the spelling of the name "amar-ud" can be translated as the calf of Utu , there is no evidence that the sun god Utu was believed to be the father of Marduk. Rather, he was equated with the conjuring god Asalluḫi in order to be able to be considered the son of Eas. Its original function as sun god becomes clear in the equation with Tutu , the city god of Borsippa , who was the god of the setting sun.

According to Jacobsen, the original form of the name is probably * Marutukkum and means "son of the sun" or "son of the storm".

Marduk had 50 names including:

In Eliš Enuma Marduk is described Ascent: Ea testifies in his home on the Apsu Marduk. He receives doubly divine faculties from his father and his fathers, and he is entrusted with the tables of destiny that determine the history of the world.

The young generations of gods soon disturb Tiamat , mother of all gods, and Apsu , their male husband , with their noisy goings-on . Apsu decides to destroy his descendants, but Ea gets ahead of him, kills him and builds his home on him. Tiamat giving birth many monsters to fulfill its divine children fight , and selects Kingu , one of their sons, the husband. To him she hands over the tables of fate and thus supreme power. In their need, the gods choose Marduk as their leader, who agrees to save them if he becomes master of everything afterwards.

In the Chaos Dragon Fight he meets Tiamat and splits her in two halves, from which he forms the world and the sky. He is honored by the gods and crowned their lord. Fifty names of honor are given to him and the destiny plates are attached to his chest. Marduk established his throne in Babylon, which became the center of the world.

After the world has been created and wants to be ordered, Marduk and his wise father Ea invent man. They form it from clay and the blood of Kingu.

Possibly the Babylonian epic of creation Enūma eliš served to install Marduk as head of the Babylonian pantheon and to eliminate the parallel cosmogonies of the many city-states. Many of the gods and events of the Enūma eliš come from the Sumerian culture, which was largely adapted by the Babylonians. The archaeological sources in relation to Sumerian and Babylonian mythology allow for different interpretations of the creation myth. The struggle of chaos against cosmos found expression in the material culture of the Mesopotamian high cultures in various ways, but interpretations of these sources always remain speculative and the assessments of certain details differ widely.

The poem Ludlul bēl nēmeqi ('I will praise the Lord of Wisdom') belongs to the same tradition of Marduk worship as the Enūma eliš . Like the epic of creation, it assumes a superior position of Marduk over all gods, but relates this to questions of personal piety. The author Šubši-mašrâ-Šakkan lived under Nazi Maruttaš .

In 1979, on Jupiter's moon Io, the Marduk volcano was named the god.

In 1999 Marduk reappeared in the computer game Indiana Jones and the Tower of Babel , but in this he was described as a cruel monster and lived in a huge machine called "Aetheritum".