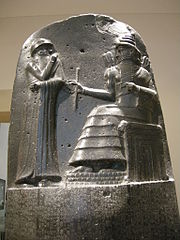 Stele with the Codex of Hammurapi in the Louvre : Hammurapi (left) in front of the god Šamaš 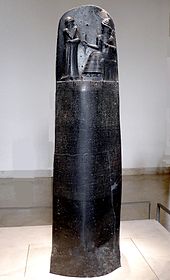 Stele with the Codex of Hammurabi in the Louvre

Hammurapi (also: Hammurabi or written with Ḫ ) was according to medium chronology from 1792 until his death in 1750 BC. The 6th king of the first dynasty of Babylonia and was named King of Sumer and Akkad .

Sources for the reign of Hammurapi are the annual formulas, which assign individual events to certain years of Hammurapi's reign. Furthermore, letters found in Mari and Larsa are important sources for the political background of the time. The number of these letters runs into the hundreds, often written by the Hammurapis office, especially by a likely high official named Awel-Ninurta . The recipients of the letters were not only foreign rulers but also officials of Hammurapi, with a particularly large number of letters addressed to people ( Sin-iddinam , Šamaš-hasir ) in the southern Mesopotamian region.

Hammurapi was the sixth ruler of Babylon and was appointed in 1792 BC. Successor of his father Sin-muballit . Hammurapi's immediate predecessors were able to expand the territory of the city-state, so that Borsippa , Kiš , Dilbat , Kazallu , Marad and Sippar were subordinate to the Babylonians. Yet Babylon was a state along with a number of others in Mesopotamia at the beginning of Hammurapi's tenure ; Other important city-states were Larsa, Ešnunna and Elam in the south and east, and Mari and Assyria in the north. In Syria, the Yamchad empire , in alliance with Mari, occupied a position of power.

Hammurapi may have been dependent on the Assyrian King Šamši-Adad I at the beginning of his reign . This is concluded from a document issued in the tenth year of Hammurapi's reign, in which the oath is sworn by Šamši-Adad I in addition to Hammurapi himself. Evidence of the close contacts between Hammurapi and Šamši-Adad during this time are letters found in Mari, then dominated by Šamši-Adad's son Jasmaḫ-Addu . As a consequence of this, it is doubted that Hammurapi's campaigns in the first third of his reign were independent undertakings and did not take place under the command of or on the instructions of Šamši-Adad. Furthermore, the campaigns without assistance from Assyria would have represented too great a risk. In his seventh year of reign, Hammurapi won a victory over Uruk and Isin , and in his eighth there was a military operation to Emutbal, which is partly interpreted as directed against Rim-Sin I of Larsa, and partly as a joint action against troublemakers . In the tenth year of reign, Hammurapi subjugated Malgum and in the eleventh Rapiqum and Schalibi , localities that belonged to Ešnunna's sphere of influence .

After Šamši-Adad's death in the 17th year of Hammurapi's reign, Assur's influence in Mesopotamia waned and Hammurapi also no longer seems to have been under his sovereignty. Nevertheless, a letter from Šamši-Adad's son Išme-Dagan I testifies to the continued good relations between the two states. For these years, the annual formulas name the acquisition of religious objects and measures aimed at expanding the infrastructure. An increase in the prosperity and population of Babylon can also be expected.

In the following time, a close relationship developed between Hammurapi and Zimri-Lim von Mari, who had overthrown the ruling son Šamši-Adads and was the son-in-law of the king of Jamschad. Often one is triple alliance Babylon Mari Jamschad called. In the following two decades, Hammurapi and Zimri-Lim made themselves available several times to troops, some of which were recruited by Zimri-Lim in Jamschad and whose number went into the tens of thousands. Several indications of delays in troop deliveries on the part of Hammurapis are interpreted to mean that Hammurapi has benefited more from the alliance. In Hammurapi's case, these troops were probably used to fight Ešnunna, Elam and Larsa.

Like Zimri-Lim in Babylon, Hammurapi had a sophisticated network of ambassadors and agents in all the major city-states . Hammurapi was in correspondence with Buqaqum and Bachdi-Lim , high officials in Mari, who provided him with information about Mari's military actions and, at least in the case of Bachdi-Lim, also acted as his envoys.

Around 1763 BC In the 30th year of Hammurapi's reign, the Elamites under their king Siwe-Palar-Khuppak pushed from the east into the Mesopotamian plain and oppressed the city of Larsa under Rim-Sin I. This situation was used by Hammurapi to first ally with Larsa and together to drive out the Elamites. In the same year Hammurapi triumphed over the armies of Ešnunnas, the Guteans, the city of Malgum and Assurs.

In the same year, hostilities broke out between Hammurabi and Rim-Sin von Larsa. According to a letter from Zimri-Lim's envoy in Babylon, an alliance between Rim-Sins and Hammurabi was planned, in which mutual protection would have been guaranteed in the event of attacks by an unnamed enemy. The initiative for this agreement came from Rim-Sin in a letter to Hammurabi. A final conclusion of this contract is not known.

In a letter, also from Mari, attacks by Rim-Sin's subjects are mentioned in the area of ​​Hammurabi, which he could cite as the reason for the war against Rim-Sin. Together with troops from Mari, the Babylonians besieged and conquered Rim-Sins residence Mashkanschapir. Larsa himself is said to have been defended by 40,000 soldiers. For this reason, Hammurapi is said to have raised more troops. Larsa itself was captured in the same year, but not destroyed, but expanded into the center of an administrative district.

In his 32nd year of reign, Hammurapis won victorious battles against Assur, Ešnunna and the Guteans , which allowed Hammurapi to expand his sphere of influence to the north.

In his 33rd year of reign, Hammurapi conquered the formerly allied city of Mari, in addition to the canal repairs mentioned in the annual formulas due to destruction during the fighting against Larsa. Texts from Mari, in which prophecies against Hammurabi are mentioned, show that the increase in power of Babylon was perceived as a threat. In addition, Malgum and some Assyrian cities were conquered again. Both cities, however, rebelled against Hammurabi and were finally defeated in the latter's 35th year of reign, with destruction possibly occurring in Mari, the extent of which cannot be determined.

After he had been asked by Zimri-Lim in an undated letter to ascend the throne of Ešnunnas, Hammurapi conquered this in his 38th year of reign. He may have flooded it beforehand by building artificial dams.

In the last decade of his reign, Hammurabi waged wars against the Assyrians. In the prologue of the Codex Hammurapi , Assur and Nineveh are named as cities incorporated into the dominion of Hammurabi. However, there is no other evidence for this. In Diyarbakır , however, a stele of Hammurabi was found, which can be interpreted as a sign of a far advance on the Tigris.

Hammurapi's dominion now extended from the Persian Gulf and the Zagros Mountains to the Euphrates arch. But his empire was not granted a long lifespan. Even during the reign of his son Šamšu-iluna , riots broke out in southern Mesopotamia, and a new people, the Kassites , appeared on the borders . From the west, the invaded almost simultaneously Hittites before, but after the conquest of Babylon by Mursili I retreated again. The Kassites eventually replaced the Hammurabi dynasty. This ended the ancient Babylonian epoch in Mesopotamia .

However, Hammurapi became famous for the oldest completely preserved legal collection, the Codex Hammurapi. This comprised a prologue , the 282 paragraphs of the law and the epilogue. It was recorded, among other things, on a 2.25 m high stele (a free-standing pillar) made of diorite .

A stele with the text of the Codex was found during excavations in Susa in 1902 . Its original location is unknown, it is believed that it was stolen from a Babylonian city by a conqueror. The stele of Susa is now in the Louvre in Paris .

Hammurapi's collection of laws was by no means unique. The Sumerian king Ur-Nammu had already created a similar work 300 years earlier , and about 150 years before Hammurapi, Lipit-Ištar , king of Isin , also had a stele inscribed. Both works have only survived in fragments . Hammurapi's writings, on the other hand, have been recorded many times. A copy on clay tablets has been preserved in the library of Aššurbanipal in Nineveh . However, no influences on other legal circles can be proven. The general esteem was not for the law, but for the literary work of art.

Meaning of the name

The name Hammurapi is a compound which is represented in the cuneiform by the syllabograms ḫa-am-mu-ra-bi . While it is Ha-am-mu clearly to the at Amorite is word Hammu (m) (father's brother), the cuneiform allows two readings for the second part of the name:

Accordingly, his name is transcribed with “Hammurabi” by those who assume that the name is made up of an Amurri and an Akkadian part, which could be translated as “great uncle”, “great father” or similar. This reading has received a lot of criticism in the recent past, as no justification has been given as to why the name should be composed of two terms in different languages. That is why many researchers today transcribe the name with “Hammurapi”, so that it could be translated as “healing father” or something similar.

In 1997 the asteroid (7207) Hammurabi was named after him in the alternative transcription and spelling.