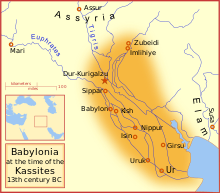 Babylonia under the Kassites

The Kassites ( Akkadian kaššū ) were a people in ancient Mesopotamia . After the Hittite invasion of Babylon in 1595 (or 1531) BC. They acquired around 1475 BC. The rule in Babylonia , which they lasted until the conquest by the Elamites in 1155 BC. BC, i.e. for a period of 400 to 500 years, ruled. According to the Babylonian King List A , they ruled for 576 years. Their power in Babylonia thus lasted longer than that of any other dynasty .

According to Brinkman, around 12,000 documents have survived from this period, most of which are unpublished.

The homeland of the Kassites is mostly sought in the Zāgros . Wilhelm Eilers settled them in northern Luristan and wanted to interpret the Kasgan-Rud, a tributary of the Saimarre, as the “Kassite River”. W. Sommerfeld also assumes an origin in the Zagros. Levine suspects the Kassites to be on the eastern bank of the little Zab . Julian Reade locates Namri (Namar), the land of the Kassites ( mat kaššî ), on the other hand west of Kermanshah . Archaeological or epigraphic evidence is missing; however, in New Assyrian times kaššū were resident in the Zagros.

The Kassite tribe of the Khabira probably settled in the Babylonian plain, other tribes in the mountains northwest of Elam and also south of Holwan , when they were 702 BC. Were attacked by Sennacherib .

The oldest written evidence of Kassites comes from Layer VII in Alalach . A letter, perhaps from the time of the ancient Babylonian king Šamšu-iluna , is also used as evidence of the presence of Kassites, since it mentions the "houses of Agum", a bukašum , where the emissaries of the king of Halaba, perhaps Aleppo , unsuccessfully requested an escort. Agum is the name of several Kassite rulers, and the Kassites were organized into houses. Since the time of Samsu-iluma kaššū have been mentioned in texts from Sippar , Dilbat and Jahrurum-šaplūm . A year name of Abi-ēšuḫ mentions, perhaps in his third year of reign, a battle against a Kassite army (ERIN 2 Ka-aš-šu-u 2 ).

The Kassites are mentioned for the first time in the 9th year of the Šamšu-iluna reign (1st dynasty of Babylon, 1741 BC according to the middle chronology) as farm workers in Sippar . They lived there in their own neighborhoods and were organized according to patriarchal "houses". According to Brinkman, Kassites are also recorded at the end of the Old Babylonian epoch on the central Euphrates , in Ḫana , Terqa and Alalach . The presence in Terqa and Hana is based solely on the name of the ruler Kaštiliašu , whom others consider an Amurite . Another mention of Kassites can be found in Nuzi .

Presumably there was a social rise of the migrants - three generations later Kassites are mentioned as administrative officials and they had the right to purchase land - as well as the immigration of an aristocratic upper class and their entourage. The Kassites now distinguished themselves particularly through their knowledge of horse breeding and carriage building . Agum became the first Kassite king of Babylon. The royal dynasty traced its ancestry back to the god of war Šuqamuna . Culturally, they quickly adapted to the culture of Babylonia, but the kings continued to have Kassite names.

In the Kassite period, a considerable part of the land belonged to the king as well as the temples. However, land could be given away to individuals, often attested by a kudurru , a deed of ownership carved in stone. Charges to or work for the crown could also be permanently waived. It is believed that such gifts were hereditary. Over time, the Kassitian kings must have lost considerable land and tax revenues as a result of these donations. The temples had their own organization of labor, but had to pay taxes to the king. The irrigation was under royal control, and letters from the city princes to the king informed him of problems. Cities were administered by a GÚ.EN.NA, villages by a ḫazannu .

Not a single Kassitic text has survived. The language is only known from personal names and some appellatives from lexical lists, above all a list of Kassite names with their Akkadian equivalents and some technical terms. In addition, some gods found their way into the Babylonian pantheon . The reason so little of the Kassite language survived is because the administrative language of the time was Akkadian.

Kassite was an agglutinating language . Contrary to old hypotheses, Kassite is not an Indo-European language . The theory Georg Hüsings that Cassite be with the Elamite used can not hold anymore. As far as we know today, Kassite must be regarded as an isolated language .

Several hundred Kassite words found their way into the Akkadian language . More than ten percent of them are god names.

The most important gods were Šumalija and the god of war Šuqamuna , to whom Kurigalzu I consecrated a huge temple in Babylon. According to an inscription in Agum kakrime, Šuqamuna was considered the ancestor of the Kassite royal family.

The Kassite contribution to Babylonian culture is still being debated.

There have been repeated attempts to identify the kaššū with strains from classical sources. Delitzsch was the first to suggest equating the Koσσαῖoι ( Kossaioi ), Kossaeans , according to Strabo (Geography, 11.13.6) the neighbors of the Medes , with the Kassites. According to Polybius (Hist. 5.44.7) they lived in the valleys of the Zagros. Lehmann-Haupt (1898, 212) emphasizes: "This is only a single case of the general phenomenon that a foreign name that has to be newly fixed in writing is simply equated with an echoing familiar foreign name." Lehmann-Haupt, Theodor Nöldeke and Jules Oppert , however, believed that the Kassites were the Kissians of the Greek authors like Aeschylus and Herodotus , who settled in Susania . Brinton also wanted to bring Herodotus Kissia and the Kossaeans into connection with the Kassites.

Hugo Winckler and Georg Hüsing wanted to identify the Kassites with the Elamites and Medes, a thesis that cannot be maintained linguistically.

Ruler of the Kassites

→ Main article : List of the kings of the Kassite Empire in Babylonia