This article provides an overview of the world's isolated languages, sorted by continent.

Problems of the term

The apparently simple definition of the term "isolated language" - a language for which no genetic relationship with any other language has been proven - is problematic:

The notion of “isolated languages” according to the above definition is therefore rather unhistorical: in reality, all languages ​​in the world have or had “relatives” who simply could not be determined for various reasons. B. because they became extinct without written fixation or because the research methods are not (yet) sufficient to prove the relationship with other languages. If one assumes that no language was created out of “nothing”, all languages ​​are genetically related to one another . However, this cannot be proven in practice, since any genetic similarities have been completely (sometimes several times) masked by other effects of language development over the millennia. Nevertheless, or precisely because of this, linguistic research on the large hypothetical macro- families , which comprise several “classical” language families and “isolated languages”, is of particular interest in this context . (See also Eurasian , Nostratic , Dene-Caucasian , Australian , Indo-Pacific , Amerindian, and others). With the establishment of each larger genetic language unit, the number of "isolated languages" is reduced.

In the following, most of the languages ​​considered to be “isolated” today are listed alphabetically with their number of speakers by continent and within them. Some are advised of the reasons why they may not be "isolated" after all. The basis is the compilation of Ethnologue , which was supplemented by specialists based on additional knowledge and corrected where necessary.

Not to be confused with the “isolated languages” are the “ unclassified languages ”: these are either extinct and so weakly handed down that classification with the available material is not possible, or they still exist but not yet sufficiently researched to make them one To be able to assign a language family or to claim with great certainty that they are "isolated". Languages ​​can also be unclassifiable if they have the characteristics of two language families. Such languages ​​are called hybrid or mixed languages . In practice, the difference between “isolated” and “unclassified” is not very sharp, so some unclassified languages ​​are also listed here.

Ethnologue as a problematic source

For almost all of these isolated languages, some of which are only known to experts, information about the ethno-linguistic situation, the number of speakers and their geographical distribution can be found in Ethnologue . However, the classification in Ethnologue is not always compatible with the one used here, so that some of the languages ​​referred to here as isolated are assigned to a language family there. Conversely, some languages ​​designated as isolated in Ethnologue are assigned to a language family here, e.g. B. Tinigua , Puelche and others. In addition, some confusion of names in Ethnologue lead to erroneous classifications and assessments. In case of doubt, the current primary sources for the individual language families or area-specific language groups should always be consulted.

The following languages ​​of Eurasia are considered isolated by the majority of researchers today:

These languages ​​are listed in Ethnologue as " unclassified " because they have not yet been researched or not sufficiently researched to be able to classify them genetically. It is rather unlikely that these are "isolated" languages.

The extinct old European and oriental languages ​​in this list could not yet be assigned to any language group, as they are only very sparsely preserved and documented. Whether these are isolated languages ​​cannot be conclusively clarified ( pre-Indo-European substrate ).

Unclassified extinct languages ​​of Eurasia in as yet undeciphered scripts

The languages ​​in this list cannot be assigned to any language group, as their scripts could not yet be deciphered. So they are actually hypothetical languages.

According to new findings of one of the best experts in these languages, RMW Dixon (see reference), the genetic unity of the Australian languages cannot be proven because the phase of possible uniformity is far too far back (at least 20,000 years). In particular, the genetic unit of the largest group of Australian languages ​​to date, the Pama Nyunga languages, is being abandoned by Dixon. According to this model, there are various smaller genetic and areal units, many languages ​​remain "isolated". Only the "isolated languages" that are still alive are listed here, including the most spoken languages ​​in Australia. In total, only 40,000 people of the Aboriginal people speak one of the 80 or so native languages; there were at least 350 languages ​​before the colonization.

In addition, a number of extinct or near-extinct languages ​​of Australia must be considered isolated or unclassified. See the external link “The Classification of the Australian Languages”.

According to Joseph Greenberg's now undisputed achievement of an overall classification of African languages into the four great phyla Afro-Asian , Niger-Congo , Nilo-Saharan and Khoisan (last version published in 1963), no African language was initially "isolated" because they all belonged to one of the four phyla.

Some Africanists are convinced, however, that Khoisan and Nilo-Saharan are not language families in the narrower sense, but only groups of languages ​​that are typologically similar and form an areal linguistic union . (Details on this topic in the article African languages .) So while some experts consider certain languages ​​to be part of the Phyla Nilosaharan or Khoisan, if no close relatives are recognizable they are considered by others as "isolated" or "unclassified". In addition, there are a number of unclassified and hybrid languages ​​(mixed languages) in Africa.

The following languages ​​are now considered to be isolated, in the past they were added to the Khoisan languages ​​(so still in Ethnologue):

The following languages ​​probably belong to one of the great African phyla, a reliable assignment has not yet been possible:

The following languages ​​have characteristics from different language families:

"Only the living languages" are listed here. A complete overview of the current state of knowledge - including the extinct, but somehow handed down languages ​​- is given on the web links "Classification of North, Meso and South American Languages" and the article Language families of the world . If Joseph Greenberg were right in classifying American languages into just three genetic units - Na-Dene, Eskimo-Aleut, and Amerind - there would be no isolated American languages. The present presentation is based on the now generally recognized genetic groups of America, whereby attempts are made again and again to demonstrate larger units in which the "isolated" languages ​​listed here can then also be absorbed. According to the majority opinion of researchers today, America (especially South America) is the continent with the most - sometimes quite large - isolated languages. 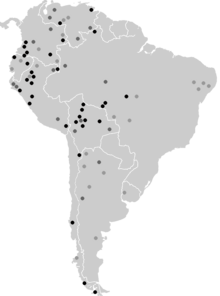