The language families of Africa.

The African is the science that deals with African languages and cultures.

The classification of the African languages

Since the 1950s, based on the work of Joseph Greenberg , the African languages ​​have been divided into four groups or phyla:

Research regards Greenberg's classification as methodologically inadequate to formulate actual language-genetic statements that are similarly reliable as the language-genetic statements about other language families. However, due to the lack of alternatives, this scheme now serves as a pragmatic ordering principle, e.g. B. for library classifications.

The internal structure of these language groups is dealt with in the individual articles. This article deals with the classification of African languages ​​as a whole.

Discussion of the African Phyla

Whether these language groups or phyla form genetically defined language families is still debated in part in African studies. In any case, the only current standard work on African languages ​​as a whole - B. Heine and D. Nurse, African Languages ​​- An Introduction (Cambridge 2000) - published and written by leading Africanists of our time (B. Heine, D. Nurse, R. Blench , LM Bender, RJ Hayward, T. Güldemann, R. Voßen, P. Newman, C. Ehret, HE Wolff et al) from these four African phyla.

The fact that Afro-Asian and Niger-Congo each form a genetic unit has been proven and is generally accepted.

The Nilo-Saharan language is also understood by the specialists in this field (for example LM Bender and C. Ehret) as a secure unit, the main features of which are to be reconstructed. This view is not shared by all Africanists, however, although the core of Nilo-Saharan - Eastern Sudanese, Central Sudanese, and some smaller groups - as a genetic unit is fairly undisputed. Few people doubt whether the languages ​​Kunama, Berta, Fur and the Maba group belong to Nilosaharan. Stronger doubts apply to the “outlier groups” Saharan, Kuliak and Songhai, whose affiliation to Nilo-Saharan is disputed by several researchers. Nevertheless, especially after the work of Bender and Ehret, there can be no question of the concept of the Nilo-Saharan languages ​​as a whole having failed. Even if one or the other outgroup should prove to be independent, the greater part of the Nilo-Saharan language will endure as a genetic unit.

The situation is different with the Khoisan : the authors of this section in the above-mentioned review (T. Güldemann and R. Voßen) do not maintain the idea of ​​a genetic unit of the Khoisan languages, which goes back to Greenberg and several predecessors, but instead assume at least three genetic units independent units (northern khoisan or ju, central khoisan or khoe, southern khoisan or Taa-ǃWi ), the languages ​​Sandawe, Hadza and Kwadi, which were formerly part of the khoisan, are regarded as isolated. The Khoisan group forms an areal linguistic union of typologically related languages, which was created through long contact phases. This assessment of the Khoisan group as a linguistic union is widely accepted today.

History of the classification

The following illustration gives a tabular overview of the research history of African languages. The group names used are partly modern, so that even the non-specialist can follow the increase - or regression - of the knowledge gained.

Greenberg's contribution to the classification of African languages

Methodically, its classification is highly controversial due to the chosen method ( lexicostatistics , or lexical mass comparison ), as this method is firstly purely statistical and secondly is based on inadequate material (exclusively word lists of mostly dubious quality) and thirdly, goes back to ages that were compared to other linguistic or archaeological ones Methods could never be recorded let alone confirmed. Therefore, the Greenberg classification is widely accepted today as a classification system (e.g. for the production of systematic library catalogs) due to the lack of an alternative, but its genetic information content is only accepted with strong reservations. 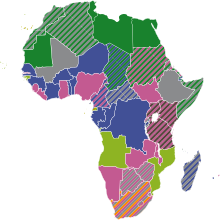 The national borders in Africa do not coincide with the borders of languages ​​and ethnic groups. With a few exceptions, no uniform cultural nations have emerged, so that there is no connection between language, people and state.

The sociolinguistic situation in sub-Saharan Africa is largely shaped by a triglossia . In addition to the numerous native languages ​​of the individual ethnic groups (→ vernacular language ), certain languages ​​have emerged as a result of migration movements, trade, pre-colonial empire formation, religious missionary work and, in some cases, the support of the colonial rulers within the framework of "tribal self-administration" and the British " policy of indirect rule " developed as African lingua franca, which take on the task of facilitating communication between the members of the various ethnic groups. In particular, they play an important role in African cities, where a population lives that, unlike the rural population, is no longer primarily characterized by an ethnic group affiliation. These lingua franca are also important in popular education and are used in some media and in literature. Swahili in East Africa, Hausa , Fulfulde , Kanuri , Igbo , Yoruba and the Mandes languages Bambara , Dioula and Malinke in West Africa are counted among these lingua franca . In Central Africa, Lingála , Kikongo and Sango play a role. In addition to the vernacular languages ​​and the African lingua franca, French, English and Portuguese have been introduced since colonial rule. In most sub-Saharan Africa, these languages ​​continue to be used as official , judicial, teaching and scientific languages in universities and higher education institutions. Knowledge of European languages ​​varies considerably depending on the level of education, country and degree of urbanization. The policy of exoglossy appears to be preferable to many states because of the linguistic diversity . In particular, the accusation of discrimination against the other ethnic groups that do not support the state (→ tribalism ) and economic isolation should be avoided. The only exceptions to the triglossia are Burundi and Rwanda . Swahili is promoted in Kenya , Uganda and Tanzania and is also anchored as an official language.

The situation in North Africa and the Horn of Africa is completely different . Before the Islamic conquests of the Arabs in the Magreb, the predominant Berber languages have been pushed into the background by Arabic . The Egyptian-Coptic became extinct in Egypt . Arabic is the mother tongue of the vast majority of North Africans. Unlike in sub-Saharan Africa, the North African states have replaced the colonial rulers' language, French, with Arabic as the official language. In Ethiopia acts Amharic as a lingua franca; there is no colonial language. In Somalia is Somaliland predominant. Italian has lost a lot of ground there.

Languages ​​in Africa (per country)