The Coptic language (from Arabic قبطي qibtī, qubtī , DMG qibṭī, qubṭī , from Coptic kypt (a) ios , next to gyptios , from ancient Greek Αἰγύπτιος "Egyptian", from Mycenaean a-ku-pi-ti-jo ) is the youngest form of Egyptian , an independent branch of the Afro-Asian language family . It was used as a spoken language from the 3rd to 17th centuries and has become extinct as a first language ; the main language of modern day Egypt is Egyptian Arabic . On religious occasions, Coptic is still used today by Coptic Christians ( liturgical language ). It is currently spoken by around 300 people inside and outside Egypt as a second language in a revived form. Until the deciphering of the Egyptian hieroglyphs , which would not have been possible without knowledge of Coptic, Coptic was the only known Egyptian language.

The Coptic has a synthetic and partially isolating morphology ; the word order is subject-verb-object , in noun phrases the head comes first. There are prepositions . Nouns are inflected according to their number and gender ; Verbs are inflected according to tense , aspect , type of action , mode and the opposition affirmative - negative . The vocabulary shows a strong Greek influence. 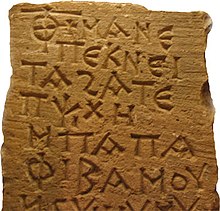 Coptic is the last stage of development of the Egyptian language, after Early , Old , Middle and New Egyptian and Demotic . Egyptian forms a separate branch of the Afro-Asian language family , alongside the Semitic , Berber , Cushitic , Omotic and Chadian languages ​​spoken in the Middle East and northern Africa.

Coptic is the direct continuation of the demotic, like the Egyptian language from around 700 BC. Is designated. Compared to the demotic, it shows some innovations that justify a distinction between the two stages of development. The oldest Coptic texts date from around 100 AD and were already written in a script derived from the Greek alphabet; they are collectively referred to as Old Coptic . The amount of surviving Old Coptic texts is very small, the late Demotic continued to serve as the written language, although it no longer corresponded to the spoken language. As a written language, Coptic did not gain acceptance until the Christianization of Egypt around the 4th century.

Even after the Arab conquest, Coptic remained the everyday language of Egypt for several centuries, but was largely displaced between the 10th and 13th centuries due to Arabization and died out as an everyday language in the 17th century. In Upper Egypt it remained sporadic and limited until modern times.

Coptic was never the administrative language in Egypt. Since the conquest by Alexander the Great , this was Greek in the Hellenistic and Christian-Byzantine times , then Arabic since the Islamic conquest. Coptic was mostly used in private and Christian liturgical areas.

Coptic is still used as a sacred language in the worship of Coptic Christians . In recent decades the language has enjoyed increasing popularity among young Copts as a sign of their special identity within Egyptian society, so that today more Copts have at least a rudimentary knowledge of the language. In everyday life, however, they still speak Arabic. The tradition of Coptic as a form of Egyptian up to modern times made it possible to open up older stages of development of Egyptian, as essential parts of the lexicon and morphology of older forms in Coptic have been preserved.

From the beginning, Coptic was divided into different dialects , most of which had only regional significance. The most important dialects were Sahrawi and Bohairi. In today Coptology the Sahidic applies simply as Coptic, as there is a very regular orthography has and therefore can be easily learned by beginners. From around 700 to 1300 AD, however, Bohairian held the status of the “classic” Coptic.

The main dialects of Coptic are the following:

Larger amounts of text have been handed down from these dialects. In ancient times, they were also used for supraregional communication, at least at times . In addition, there are a number of regionally and temporally limited dialects, of which only small fragments - papyri (remains) etc. a. - are handed down. Outside of Egypt, Coptic also served as a written language in Christian Nubia .

Coptic is written in a script with around thirty characters, depending on the dialect. Most of the Coptic alphabet is derived from the Greek alphabet, some characters go back to the demotic script . In contrast to the systems previously used for the writing of Egyptian, the hieroglyphs , the hieratic script and the demotic, the Coptic script is a phonetic script that takes vowels and consonants into account equally.

As a rule, a letter in the Coptic script represents a phoneme . However, there are a few exceptions:

The following chapters give a general overview of the basic structures of Coptic grammar. The grammatical system follows the description of Layton 2000 in particular. For a detailed overview of the grammar of Sahid, see the article Sahid .

The transcription of Coptic used in this article distinguishes the graphemes of the Coptic script regardless of allographs . Accordingly, both ⲧⲓ and ϯ are represented as ti , for example . On the other hand, allophones, as far as they can be distinguished from the Coptic script, are separated; consequently / nō / [nu] is circumscribed here as nu . In addition, the syllabic and non-syllabic allophones of / y / and / w / are distinguished.

Morphological categories of the Coptic noun

The Coptic nominal system has the genera masculine and feminine as well as the numbers singular and plural. In contrast to earlier forms of Egyptian, these categories are no longer marked on the noun itself in Coptic. For this, Coptic has its own category of determination or indetermination, which is mainly marked by various articles and demonstrative pronouns , which are inflected according to gender and number .

Indetermination is indicated by the indefinite article (singular w- , plural hen- ) or a series of partly adjectival, partly noun indefinite pronouns . A group of formally closely related morphemes is used to mark determined noun phrases , which have the elements p (masculine singular), t (feminine singular) and n (plural) in common. Specifically, these are the following forms, which are usually in front of the core of the noun phrase (the aspirated Bohairian allophones are not taken into account; the examples are - unless otherwise stated - Sahidic):

Determined noun phrases that are not nominal but pronominal are formed with the following morphemes:

Depending on the position and syntactic function, personal pronouns appear in different forms. Independent (absolute), dependent ( proclitic ) and suffused forms can be distinguished. The latter occur in numerous allomorphs. As is typical for Afro-Asian languages, the gender of the personal pronouns is only differentiated in the 2nd and 3rd person singular. The following table lists the corresponding morphs of the Sahidic dialect:

With a few exceptions, absolute personal pronouns are at the beginning of sentences and have a stressful effect in many uses. They can be in the nominal sentence and in three-part conjugation patterns; Coptic uses the proclitic pronouns as the subject of two-part conjugation patterns . Suffix pronouns are always suffixed to a reference word. They are used especially in verbal conjugation as subject and object and as the object of prepositions . In possessive use, they stand behind possessive articles and possessive pronouns as well as behind a small group of nouns. Nouns, including infinitives, and prepositions take a special morphological form before suffix pronouns, the status pronominalis .

While the older Egyptian had a complex synthetic verb morphology , the conjugation of most Coptic verbs only needs two forms: the infinitive and the qualitative (in more recent terminology also tripod ). The infinitive mainly expresses a process and can appear both as a predicate and as the head of a noun phrase. In contrast, the qualitative expresses a state and is limited to the function of a predicate . The infinitive and qualitative of a verb have essentially the same consonants, but different vowels: ⲕⲱⲧ kōt "build" (infinitive), ⲕⲏⲧ kēt "be built" (qualitative).

Only a part of the infinitive can form all three states; they are hereinafter referred to as "changeable infinitives".

While most verbs use the infinitive instead of their own imperative (e.g. ⲥⲱⲧ̄ⲙ sōtm "Listen!"), Some verbs have their own imperative form from older language levels. So z. B. ϫ ⲱ čō “say, speak” in many dialects (including Sahid, Achmim and Fayyum) the imperative on ⲁ ϫ ⲓ ači “say!” (Cf. näg. / Dem . J.ḏd ).

As a predicate, the causative infinitive, which historically goes back to a periphrastic causative construction, actually has a causative meaning:

A series of sentence patterns is called a nominal sentence, the predicate of which is not verbal, but is formed by a noun phrase. In most sentence patterns of this type, a morpheme inflected according to gender and number is also used, which resembles a copula (masculine singular pe , feminine te , plural ne ) and is formally and etymologically related to various determination markers. The negation takes place with (n) ... an / en. In certain dialects, the unstitched forms of the absolute pronouns, which are not used anywhere else, are used as the pronominal subject of the 1st and 2nd person. The choice and position of the morphemes has an impact on pragmatic aspects of the sentence:

Two-part conjugation patterns only consist of a subject and a predicate. The subject can be a determinate noun, a proclitic pronoun, or an expression wn + indeterminate noun. The predicate is formed by an infinitive, a qualitative or an adverbial phrase ; To express the future tense, an infinitive in predicate position is preceded by the morpheme na (Fayyum ne); the negation is carried out by adding an / en , which is supplemented in most dialects by a preceding n .

Three-part conjugation forms consist of a conjugation base , a following subject and the predicate. The conjugation base is characteristic for tense , mode , aspect , type of action and the syntactic function of the sentence (main clause, temporal clause, etc.). Pronominal subjects are expressed by certain allomorphs of the suffixed pronouns; the predicate must be an infinitive. In all dialects there are almost the same conjugation bases, which usually only differ in phonological terms. The following forms are possible in Sahidic in main clauses:

Another group of shapes is only used in embedded sentences. Their negation takes place with only one morpheme (Sahidic, Achmimisch, Subachmimisch tm; Bohairisch, Fayyumisch štem), compare n = f sōtm “and he hears” (Sahidic) with negated n = f-tm-sōtm “and he does not hear”. The subordinate conjugation bases of Sahidi are:

Objects follow the verb. For verbs that have a changeable infinitive, a direct object can either be suffixed to the infinitive or connected with a preposition . Undetermined objects are always suffixed, objects with marked determination or indetermination are always connected with a preposition in two-part conjugation patterns, both constructions are possible in three-part conjugation patterns. Verbs that only have the status absolutus always connect the direct object with a preposition. Examples from Sahid:

If no object is suffixed, an indirect object always follows a direct object; However, pronominal objects always come before nominal ones. Adverbs and prepositional phrases are usually behind the objects. Examples:

Historically, two large groups can be distinguished in the Coptic vocabulary. Several thousand words are inherited from earlier phases of Egyptian; a not inconsiderable proportion, however, comes from the Greek. This includes both religious or technical terms ( anastasis <Greek ἀνάστασις “resurrection”) as well as conjunctions and particles such as de , nde <Greek δέ “but”. However, the morphology of these foreign words was not borrowed, rather they are treated like Egyptian-Coptic. There are also words that are borrowed from other languages ​​or that cannot be interpreted etymologically .