The derivation of the name from the Egyptian word nebu (in transcription : nb.w ( nab ̆w ) or Coptic nub , "gold") is controversial. In the Old Kingdom , the name Ta-seti stood for both the sandy arcs of Nubia and the first Upper Egyptian district conquered by Nubia , which stretched from the northern Gebel es-Silsila near Kom Ombo to the first Nile cataract. Well-attested mentions were in the " World Chamber of the Sun Shrine " of Niuserre (2455 to 2420 BC). The Nubian Ta-seti was considered a mysterious destination and origin of migratory birds , fish and other animal species. Since the Middle Kingdom , Nubia has been known as Ta-seti, Iuntiu-Seti , Nehset , Ta Nehsi , Kesch or Kasch .

The geographical delimitation is based on the political and cultural unity that was independent of Egypt, which was created by the Kushitic empire and which lasted until the fall of Meroitic rule in the 5th century AD. In the east, Nubia stretches across the Nubian Desert to the Red Sea ; in the west, the region ends undefined in the Libyan Desert . The southern limit is assumed to be 18 ° latitude at the 5th cataract, because here further west between the earlier natural border of the 4th cataract at Karima and Alt Dunqula the Nile turns in a large arc to the north from its southwestern flow direction. This definition of the southern border was adopted by UNESCO in its overview for the rescue of the Nubian monuments. The former Ptolemy Lake dried up in the 3rd millennium BC. Chr. From.

The area between the 1st and 2nd cataracts today belongs almost entirely to Egypt (except for a few kilometers north of Wadi Halfa ) and is known as Lower Nubia . The southern part in Sudan is called Upper Nubia . From the reign of Ptolemy IV (reigned 180-145 BC) in Egypt, the border area with Nubia south of the 1st cataract was called Dodekaschoinos ("Twelve Mile Country"). It ended 126 kilometers from Aswan, just north of Sayala . In the Geographike Hyphegesis by Claudius Ptolemy , written around 150 AD , a triakontaschoinos ("land of thirty miles") is mentioned, which probably extended further than the land of twelve miles to the 2nd cataract.

Nubia is considered to be the interface between Egypt, which is more likely to be part of the Mediterranean, and sub-Saharan Africa. This was true in the past as it is today.

The Noba were an ancient nomad people who could only be equated to a limited extent with today's Nubians . Nubia thus corresponds geographically to the Middle Nile region . This equation is represented by László Török and the majority of archaeologists. The determination of the northern border of Nubia at the 24th parallel near Aswan and the southern border of Nubia at the 18th parallel near Khartoum takes into account the expansion of the Nubian- speaking ethnic group of the Noba up to the 16th century.

The prehistory of Nubia (especially sub-Nubia) is divided into individual cultural groups, which are designated with letters.

In Upper Nubia near the 3rd Nile Cataract, the Kerma culture developed into the kingdom of Kerma , which is the earliest known black African state. After the end of the Egyptian Middle Kingdom (around 1750 BC ), the rulers of Kerma conquered Lower Nubia as far as the border of the Egyptian heartland and were even able to penetrate into Egypt in individual campaigns. Around 1500 BC Chr. Destroyed the pharaohs of Egypt's New Kingdom the kingdom of Kerma and conquered Nubia to the 5th Cataract. The Nubian peoples were largely culturally assimilated. The Egyptian occupation lasted until around 1000 BC. Chr .

The kingdom of Kush

Around 750 BC BC (possibly as early as 1000 BC), Nubian princes founded a state in the Karima area that took over the ancient Egyptian name of Kush and expanded rapidly. Around 700 BC BC Egypt was conquered. The Nubian kings ruled Egypt as the 25th dynasty . Around 660 BC With Assyrian help , Egypt gained independence from Nubia, but the Kushite princely house continued to rule south of Egypt. The seat of government was in the city of Napata near today's Karima. Around 300 BC The capital was moved to Meroe north of Khartoum . During this time, the cultural reference to Egypt is more and more abandoned, which is expressed, among other things, in the development of an own script and the use of the Meroitic language in official texts. Around 350 AD the kingdom of Kush collapsed, possibly due to an environmental disaster or a military defeat against the Ethiopian empire of Axum .

See also : Pyramids of Meroe  and List of the Nubian Kings 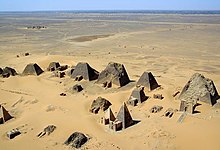 Aerial view of the pyramids of Meroe in 2001

From the time of the 25th dynasty and the Napatan-Meroitic empire, numerous pyramids in Sudan testify to this day ; the oldest pyramid built in Sudan is probably that of the Nubian pharaoh Piye in the cemetery of al-Kurru . The model was probably not the Egyptian royal pyramids from the time of the Old and Middle Kingdom , but the much more recent Egyptian private pyramids, especially from the Theban area . This is supported by both the steep angle of inclination of the Nubian pyramids and the fact that, like the Egyptian private pyramids of the New Kingdom , they are much closer together than the Egyptian royal tombs. In addition, the tomb shape of the pyramid in Nubia was not reserved for kings, but wealthy private individuals were also buried in pyramids, which means that the Nubian pyramids also follow the tradition of the Egyptian private pyramids. The steep angle of inclination probably also had constructive reasons: A scratch drawing from the ruins of Meroe , near the village of Begrawija , shows a shadoof (a kind of crane) as a building tool. The length of the boom of this crane limited the side length of the pyramids. Over 200 pyramids have been found in Nubia; so there are more pyramids in Sudan than in Egypt. This is mainly due to the fact that only a few of the private pyramids of the New Kingdom have survived in Egypt to this day.

In the fourth century AD, the Meroitic Empire seems to have split up into various smaller principalities or kingdoms. In cultural terms, these little realms are the continuation of Meroe. 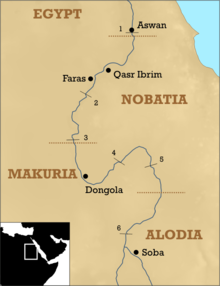 In the 6th century Nubia was Christianized. The kingdoms of Nobatia , Makuria and Alwa (sometimes also called "Alodia") and a large number of dioceses with bishops, clergy, cathedrals and monasteries were formed. During this time Nubian came into use as a written language, in the Middle Ages it was written in Coptic letters with some modifications . However, the main language of the Christian liturgy in Nubia remained Greek. In terms of church and denomination, the Nubian dioceses belonged to the Patriarchate of Alexandria of the Copts .

As a result of Arab immigration from Egypt, the Christian kingdoms of Nubia were gradually shattered. A decisive turning point was the rededication of the Dongola Cathedral into a mosque in 1317 AD. In the 16th century, Nubia was formally completely Islamized. However, the Nubian language remained in use, alongside Arabic , which was becoming more and more popular as a national lingua franca .

Numerous church ruins from Christian times have been found in Nubia to this day. The Nubian churches often had a roughly square or cruciform floor plan and were occasionally very small. Some suggest that they only served as a house for the clergy's liturgy and a sort of sacristy ; the actual church services took place in front of the church in an open field. The most famous works of art from Christian Nubia are the church frescoes in the Cathedral of Faras .

Nubia in the 19th century

In 1821 the Egyptians, armed with modern European weapons, again conquered Nubia and parts of the White Nile bordering it to the south . Since Egypt was virtually independent at that time, but officially still a province of the Ottoman Empire , the conquest of Nubia took place in its name. This is why this era is usually referred to as Turkiya in today's Sudan .

In 1882 the Sudanese Arabs, led by Muhammad Ahmad, rose against Egyptian rule and conquered Khartoum . Muhammad Ahmad viewed himself as a God-sent Mahdi , a kind of Messiah figure , which is why this uprising is also known as the Mahdi uprising .

During the conquest of Khartoum, the Governor of Sudan, the British General Charles Gordon , who was in de facto Egyptian (de jure Turkish) service, was killed in the fighting. Several Egyptian armies led by British officers were defeated, including the Anglo-Egyptian Expeditionary Corps commanded by General William Hicks .

In 1898 British troops under the command of Horatio Kitchener of Egypt retook Nubia and defeated the Mahdists at the Battle of Omdurman near Khartoum. To handle the logistics for this campaign, the first railway line in Nubia was built along the Nile .

Sudan and thus also Nubia came nominally under joint British-Egyptian rule ( condominium ) in the following period ; Since the British exercised decisive influence in Egypt itself, Sudan was de facto a British colony . John Grenfell Maxwell became governor of Nubia in 1897.

Nubia in the 20th century

In 1955 there was a referendum on the connection to Egypt, which was negative. Sudan was granted independence in 1956. The border with Egypt was set at Wadi Halfa ; Nubia was thus divided between two states. In the 1960s, Egypt planned and built the Aswan High Dam ( Sadd al-'Alī ), which should by far exceed the capacity of the older Aswan High Dam, which was still built by the British. In 1971 the high dam was completed. In the period that followed, almost all of Lower Nubia was flooded by the emerging Lake Nasser , the southern part of which is called Lake Nubia . In an unprecedented rescue operation, the international community under the leadership of Unesco relocated numerous cultural monuments in higher regions; Most of the sub-Uubian population was resettled in southern Upper Egypt, creating Nubian language islands in Egypt, which was otherwise consistently Arabic.

With Chinese help, the government of Sudan had the Merowe Dam built in Dar al-Manasir on the 4th cataract . Commissioning took place in spring 2009.

The Nubian population is largely Arabized in both Egypt and Sudan. In addition, Nubian is still alive as a mother tongue. It is written in Arabic script .