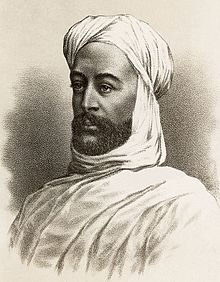 Muhammad Ahmad ibn as-Sayyid Abdallah ( Arabic محمد بن السيد عبد الله بن فحل Muhammad bin as-Sayyid ʿAbdallāh ibn Fahl , DMG Muḥammad Aḥmad b. as-Sayyid ʿAbd Allāh b. Faḥl ; * 1844 in Darar near Dunqula ; † June 22, 1885 in Omdurman ) called "the Mahdi" ( the one led by God ), Islamic political leader of the Mahdi uprising named after him, central figure in the history of Sudan and the Arab and Islamic world of the 19th century.

Muhammad Ahmad was born in 1844 to an Arabized Nubian family in Sudan . His father was a boat builder and went with his family to Berber and Khartoum because there were better educational opportunities for his sons. While Muhammad's brothers followed their father's profession, he became interested in Islam. His great-grandfather was already a recognized Sherif in Sudan.

Muhammad Ahmad studied Fiqh and the Koran and turned to Sufism . In 1861 he met the scholar Sheikh Muhammad al-Sharif, who headed the Sammaniyya order . He recognized Muhammad's special commitment and thereupon appointed him sheikh . He was now allowed to teach the tariqa himself and gather his own followers around him. In 1871 he followed his family to Aba Island in the White Nile and built a mosque there . He found many followers and became known as an eloquent preacher of a reformed Islam of a return to the values ​​of the Koran. After he became upset about the lavish efforts of Muhammad al-Sharif at a circumcision festival, he was expelled from the order. Two unsuccessful pilgrimages of Muhammad Ahmad did not lead to reconciliation, so that he joined the order of Sheikh Koreishi.

During his travels through Sudan, Muhammad Ahmad developed an oppositional stance against the Egyptian rule. He turned against the repressive tax policy, the arbitrariness of the officials and the lack of seriousness in the practice of Islam under the Egyptian occupiers. But only Abdallahi ibn Muhammad , his later successor, considered him the Mahdi . In Islam, the Mahdi is the Messiah sent by Allah who will eliminate injustice in the world. Abdallahi ibn Muhammad, after recovering from an illness, spread the image of the miraculous Master. In 1881 Muhammad Ahmad finally declared himself a Mahdi. Belief in the arrival of the Mahdi was widespread in Sudan at this time. Muhammad Ahmad headed an uprising against the Egyptian government and declared his mission in writing on June 29, 1881. This was not limited to Sudan or Egypt, the entire Ottoman Empire from Mecca to Constantinople was to give way to an Islamic state modeled on the Muslim community of the 7th century. 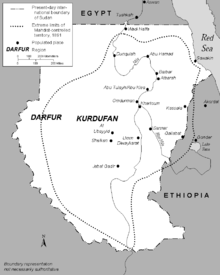 Expansion of the area controlled by the Mahdists in 1891 in the old borders of Sudan, before the split of the south

The tomb of the Mahdi in Omdurman
→ Main article : Mahdi uprising

On August 12, 1881, the governor of Sudan Rauf Pascha tried to arrest Muhammad Ahmad. But the two with Remington rifles equipped companies were lured into an ambush and the 300 - armed with daggers and sticks - followers Muhammad Ahmad defeated ( Battle of Aba ). Muhammad Ahmad then called for holy war . He was able to gather an army of so-called Ansar around himself and won numerous tribal leaders for his cause. The motivation of his followers was diverse: While the once wealthy slave traders wanted to abolish the taxes and reprisals of the Egyptians, large parts of the poor population followed him for the sake of his religious importance. In order to escape the access of the authorities, he went on the march to Kordofan . After an arduous march through the desert, the Mahdists reached the Nuba Mountains on October 31, 1881 . There Muhammad Ahmad set up a base where he won his second victory in the battle of Jebel Gedir on December 9, 1881 . Rauf was then recalled. He was accused of underestimating the danger of the Mahdi uprising. His successor, Giegler Pascha of German descent , dispatched a force of 6,000 men under the command of Jusuf el-Schallali Pascha to the Nuba Mountains in June 1882. On June 6, these troops were also crushed in the Second Battle of Jebel Gedir . After that, large parts of the population believed that Muhammad Ahmad was the expected Mahdi. The turmoil in Egypt in the course of the occupation of the country by Great Britain as a result of the Urabi movement favored the spread of his idea. After the suppression of the Urabi movement, the Mahdi met with new followers. The religious movement of Mahdism, which had existed long before in the Islamic world, now gripped the whole country with the British invasion of Egypt. The force of the Mahdists continued to grow and was able to take the provincial capital El Obeid on January 19, 1883 after a four-month siege . In the process, the Mahdists fell into the hands of 6,000 rifles, five cannons and 100,000 pounds . Muhammad Ahmad established his headquarters in El Obeid .

The Mahdists destroyed a 10,000-strong Egyptian army on November 5, 1883 at the Battle of Sheikan . With this victory the reputation of the Mahdi rose considerably. The new governor of Sudan, the British Gordon Pasha , tried in vain to prevent the Mahdi movement from spreading. From March 1884 to January 1885 the Mahdists carried out the siege of Khartoum . The Mahdists conquered the city on January 26, 1885, killing Gordon Pasha. The British expedition to the rescue of Gordon under General Wolseley reached the city on January 28, 1885, two days after it fell. The British troops were then withdrawn from Sudan, except for the Suakin area . Great Britain did not try to recapture Sudan until around ten years later.

The Mahdi founded a new capital on the western bank of the Nile in Omdurman , across from Khartoum, where he died on June 22, 1885. His body was first buried in a tomb in Omdurman. After the conquest of the city by the Sirdar ( commander in chief ) of the Egyptian army Kitchener ordered the destruction of the building to prevent a place of pilgrimage. The task was entrusted to WS Gordon, the nephew of Gordon Pasha who was beheaded by the Mahdi. Kitchener later had the Mahdi's body cremated and the ashes scattered in the river. In 1947 the British allowed the Mahdi's son to have the tomb rebuilt true to the original. The building with the silver-colored conical roof is the landmark of Omdurman.

His successor and closest confidante, Abdallahi ibn Muhammad, with the title of Caliph , managed to take over the entire area of ​​Sudan, between the provinces of Darfur in the west, Suakin in the east (excluding the city), Dongola in the north and Bahr al-Ghazal in the south subject. The Omdurman Caliphate formed the first Sudanese national government and existed for 15 years. The Mahdists were defeated on September 2, 1898 at the Battle of Omdurman by a British-Egyptian expeditionary force under Kitchener.

The Mahdi uprising is considered to be the third world's first successful uprising against colonialism . The Mahdi Empire, however, colonized areas of non-Muslim blacks in the south. By jihad these areas were subjected to and forced Islamized - a practice that is still used in Sudan until today (eg in. Nuba ).

Muhammad Ahmad founded a movement of religious fundamentalism that can still be found in today's Sudan. Against the background of the Egyptian rule and the decline of this rule by the British occupation, a political movement quickly emerged that spread across the entire country. The Mahdi uprising developed into the first successful uprising against colonialism in Africa. Even today, Muhammad Ahmad is revered as Abu l'Istiklal (father of independence) in Sudan . As in the time of the Caliphate, his grave still serves as a pilgrimage site today. The movement he founded has around three million followers in Sudan today. The son of Muhammad Ahmads Abd al-Rahman al-Mahdi founded the National Umma Party in February 1945 . His grandson and great-grandson, Muhammad Ahmads Sadiq al-Mahdi, is now the chairman of the Umma party and has been the country's prime minister twice .

The great-great-grandson of Muhammad Ahmad is the actor Alexander Siddig , known as Dr. Julian Bashir in the US science fiction series Star Trek: Deep Space Nine (1993-1999).

In the film Khartoum (1966) Muhammad Ahmad is portrayed by Laurence Olivier .

Muhammad Ahmad appears as the eponymous figure in the Mahdi trilogy (magazine version 1891–93, book version 1896) Karl Mays . In it he is portrayed as an ally of the fictional slave hunter Ibn Asl and captured by the main character. In the further course of the plot, the narrator saves his life several times. Before that he had already appeared in May's illustration text Ibn el 'amm (1887).