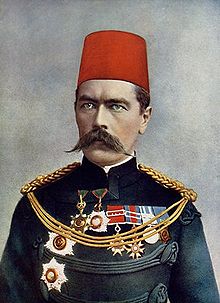 Kitchener in the uniform of a Sirdar from Celebrities of the Army , London 1900

The British Commander-in-Chief of the Egyptian Army during the time of British rule in Egypt bore the title Sirdar . After the occupation of Sudan, the office was linked to that of the Governor General of Anglo-Egyptian Sudan .

During the occupation of Egypt by British troops under Garnet Joseph Wolseley in 1882 during the Anglo-Egyptian War , the Egyptian army was defeated at the Battle of Tel-el-Kebir . She was then rebuilt under the command of 25 British officers and a British Commander in Chief. The official title of this commander in chief was Sirdar . The first Sirdar was Evelyn Wood, with an annual salary of £ 5,000  . His deputy was Francis Grenfell , who took over the office in 1885.

In Sudan , which came under Egyptian rule from 1821, the Mahdi uprising began in 1881 and led to the formation of a separate Mahdist state. In June 1889 they attacked Wadi Halfa , the southernmost base of the Anglo-Egyptian troops. The Sirdar Grenfell himself took command on the Sudanese border and concentrated his troops at Toski . There it came to the battle of Toski on August 3rd , in which the attacking force of the Mahdists was destroyed.

From April 9, 1892, Horatio Herbert Kitchener commanded the Egyptian army as Sirdar. Shortly after his appointment, he began to prepare the Egyptian army for the reconquest of Sudan and the suppression of the Mahdi uprising. In 1896 a British-Egyptian expeditionary force was finally set out under his leadership. On September 2, 1898, Kitchener defeated the Mahdists at the Battle of Omdurman . The recaptured land was not returned to Egypt, but constituted as an Anglo-Egyptian condominium in 1899 . Kitchener became the first Governor General of Sudan. The offices of Governor General of Sudan and Sirdar of the Egyptian Army were combined until 1936.

After Kitchener became Chief of Staff to Lord Roberts in the Boer War in December 1899 , Francis Reginald Wingate took over the role of Governor General of Sudan and the Sirdar. On January 1, 1917, Wingate became High Commissioner for Egypt . The functions of Sirdar and Governor General of Sudan remained linked until 1924. Major General Lee Stack was assassinated on November 19, 1924 during the Sudan Crisis . Because of his assassination, the British government put political pressure on Egypt, which led to the resignation of Saad Zaghlul Pasha on November 24, 1924.

Through the alliance agreement of August 26, 1936, Great Britain waived certain reserved rights in Egypt and withdrew its troops to the Suez Canal zone, but secured the right to access the Egyptian transport and communication system in the event of war. In addition, the Egyptian army was completely subordinated to the supreme command of the king and the office of sirdar was abolished.

The Sirdar resided in the Sirdaria building complex in the Zamalek district of Cairo . It was also the headquarters of the British military secret service in Egypt .