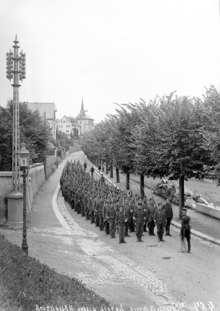 Company of Swiss recruits during the First World War

A company is a military unit that reports to a unit , in some cases directly to a large unit , and consists of sub-units .

The word Compagnia, used throughout Europe, replaced the word Fähnlein in the German-speaking area in the 17th century .

The company was originally, like the regiment , an administrative unit and not a tactical troop body (in the days of the Landsknechte these were German with heaps of violence or Gevierthaufen , from the middle of the 17th century also called "international" battalions ). From the conception of the company as a public company (see. Company (companies) and partner # etymology ) is due also to the 19th century existing term company business .

Military symbol of the 3rd Company of Panzer Battalion 104 of the Bundeswehr. The vertical line on the rectangular frame indicates that the unit is a company.

The company is the smallest disciplinary unit in the Bundeswehr and consists of 60 to 250 soldiers. It is in two or more platoons , occasionally in squadrons , as sub-units with z. Partly divided into specific military tasks. In addition, a company can also contain one or more smaller units ( group , squad ), especially a company squad .

Disciplinary units are led by a chief ( unit leader ), a company by a company commander . In some branches of the Army, as well as in the Air Force and the Navy, the company (and its boss) has a different name:

As a rule, a company is subordinate to a battalion , in special cases especially in the combat support troops and in the New Army Army structure , also to a regiment as the next higher organizational unit . Independent companies (approx. 150–250 soldiers) that have additional support groups can also report to a brigade or, less often, a division (e.g. televsioning companies ).

A combat company is deployed with parts of the 1st / staff and supply company such as field kitchen troops , maintenance troops (WTG), medical troops and, depending on the type of troops, with telecommunications troops (battalion radio group), motorcyclists (liaison group), EAG troops with earthworks equipment (EAG) , parts of the 6th / heavy combat company Joint Fire Support Team (formerly VB Mörser / Artillerie) and other forces, mostly in troop strength, such as dog handlers reinforced.

A mechanized company usually consists of two armored platoons and two armored infantry platoons by submission and subordination and is supported in addition to the above sub-units with other subordinate parts such as an army anti -aircraft group with two cheetahs , engineer and recovery tanks and an armored San troop.

An infantry company can be reinforced with an armored infantry or armored platoon. It is usually not mixed with mechanized companies.

Headquarters companies provide associations or large associations with support staff for staff services and are usually led by an officer from the military service . The staff officers who make up the staff departments (S1-S6) are combined in the staff and do not belong to the staff company.

In the Bundeswehr , companies are generally designated with ordinal numbers , which are always followed in writing by the number or name of the superordinate organization after a slash. For example, 3./- alone designates the third company, 3./310 the third company of a (unspecified) battalion or regiment with the number 310, 1./FmBtl 900 the first company of the telecommunications battalion 900.
The number is on military symbols of the company on the left (below) in front of the basic sign.

A special feature is the headquarters company of a battalion: It is not taken into account in the numbering, but instead has the abbreviation "Stb". This means that the 1st company of the battalion is also the first tactical company, which is then organized and manned according to the battalion's type of weapon. The same applies to batteries and relays .

The structure within the United States Marine Corps is based on the 3 + 1 rule, in which three soldiers, sub-units or units are subordinate to a leader. The squad, also known as the “fire team”, consists of three shooters with a squad leader - 1/3. The group consists of three troops and is led by a sergeant as group leader - 4/9. The rifle platoon consists of three groups, a medic, a deputy platoon leader and a platoon leader, mostly in the rank of lieutenant or first lieutenant - 1/13/28 = 42. A rifle company consists of three rifle platoons, a fire support platoon and the company command group and is usually led by a captain guided. The battalion's staff and support companies each consist of a staff, communications and supply platoon as well as the battalion's first aid station.