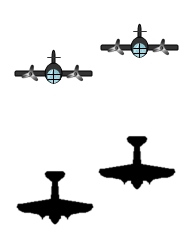 As rotting in which is military aviation a formation from airplanes or helicopters usually two, respectively. Depending on the mission, there can be more. The Rottenführer is responsible for leading the Rotte . He chooses his position within the formation depending on the situation and use.

The next larger flying formation is called a chain .

In the common air defense system of NATO , for example for Air Policing or Quick Reaction Alert , alarm groups are held that are available in a high military readiness level with interceptors 24 hours a day, 365 days a year. The deployment order is given by a superior national command post , a CRC or a CAOC .

In the NVA air force, the pair was the smallest flying formation comparable to the Rotte . It consisted of two aircraft, the leader (superior) and the led (subordinate). The name was adopted by the Soviet Air Force (there: Para, Russian Пара ).

In the Wehrmacht Air Force , the more experienced pilot was in charge as a squad leader. His Rottenflieger (also called Kaczmarek in the parlance of the aviators ) could well be of a higher rank.