from Wikipedia, the free encyclopedia
This is the spotted version , flagged on December 6, 2019 . There is 1 pending change that has yet to be viewed. 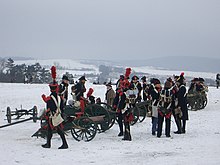 A battery (short Bt or Bttr ) refers to positions and military units of the artillery with guns , howitzers , rocket launchers , mortars or anti-aircraft cannons .

In the historical naval forces , a battery initially referred to any covered space with more than three guns, later the totality of the guns on one side of a warship . Ironclad ships were known as floating batteries . One example is the USS Fulton .

Since the rate of fire and the hit accuracy of the artillery were very limited in the early days , the guns were grouped together. These groups were called batteries, meaning: “What is necessary to strike” (from Latin : battuere , French : battre = to strike; bataille = battle, from this battalion ).

A field battery was the name given to a battery used in the field artillery used in the past . In the army of the German Empire in the 19th and the beginning of the 20th century, a distinction was made between

Today, a battery corresponds to the company's artillery as a general term for the size of a military unit.

In the artillery of the Bundeswehr, the battery is normally divided into two firing platoons of four guns or launchers each. In addition, there is a battery command team and an additional survey team. During operations, the battery is assigned support forces for supplies and a medical team. See also missile artillery battalion .

In the Luftwaffe , a MIM-23 HAWK anti-aircraft battery consisted of two “fire sections” with three rocket launchers each.

In the army air defense of the Bundeswehr, a battery consisted of the leadership team and various other groups and troops either of three platoons with five weapon carriers each Wiesel 2 Ozelot or two platoons each with three anti-aircraft cannon tanks Gepard .

In the armed forces the (self-propelled howitzer) battery essentially consists of:

During the fire fight, in addition to the GsSta, ReTrp, SanTrp and WTrp as well as at times MunGrp and EVGrp are located in the so-called firing room (FStR) over which the 1st officer has command.

Around 1983 there was an anti-tank anti-aircraft battery with aging tanks in the Hörsching barracks .

There are four different artillery batteries in the Swiss Army .

The type of battery consists of:

The supply train is responsible for the ammunition of the guns. This is carried out at so-called ammunition points, whereby the choice of location of these points is of decisive importance for the course of the battle and the standby time. The ammunition is either distributed with trucks (mostly at department level), in so-called "racks" (combination drawer made of projectiles, fuses and charges) or in the field with the unarmored M548 crawler vehicles .

The command platoon includes the commander (captain) and his team, the reconnaissance team, the command group, the fire control group and the rear service.

For historical reasons, the anti-aircraft companies of the Swiss Air Force are also called batteries, which are grouped into departments .