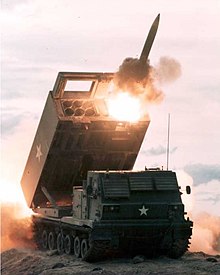 A rocket launcher , in the Eastern bloc also projectile launcher and in the Soviet Union Guards launcher partly, rocket artillery called, is a starter on a trailer or self-propelled guns , mostly unguided by single or multiple (multiple rocket launcher) missiles can be fired. The first rocket launchers were used in World War II.

Rocket launchers of the Soviet Katyusha design can hold between 4 and 40 rockets, with calibers over 227 mm being launched from rails and calibers below from tubes. The launchers are usually mounted on trucks, sometimes also on chain chassis. But there are also rocket launchers on towed mounts .

Colloquially - due to imprecise translations of the English term rocket launcher - anti-tank handguns or shoulder-supported anti-aircraft missile systems are often referred to as rocket launchers , which from a military-technical point of view is uncommon or even wrong.

The origin of this type of artillery goes back to the Chinese. The first documented firework rocket attack on the city of Kaifeng took place in 1232 . After gunpowder came to Europe, scholars showed great interest and as early as 1410 the Frenchman Friossart developed the idea of ​​firing rockets through pipes. In 1591 Johannes Schmidlap developed the first stage rocket. The rocket principle was scientifically documented for the first time in 1684 by Isaac Newton .

After Indian princes had used the device developed by the Chinese for launching fireworks at the end of the 18th century against the British East India Company (see Mysoric rocket ), the British brought the idea back to Europe. The first major use of “rocket launchers” in Europe took place in 1807, when the English bombarded the city of Copenhagen from sea and set parts of the city on fire with Congreve rockets . William Congreve (1772–1828) developed these incendiary missiles to use in the Napoleonic Wars . As a result, units for this weapon were set up in France, Russia, Austria, Switzerland, the USA and Saxony. Due to the development of rifled guns, artillery missiles were replaced for some time. The Austro-Hungarian fireworks corps developed rocket artillery in the Wöllersdorf works (Lower Austria) around 1860 . 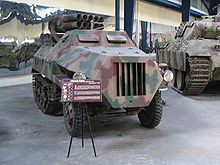 Rare Panzerwerfer 42 of the Wehrmacht in the Musée des Blindés

During the Second World War , multiple rocket launchers mounted on carriages, trucks or half-track vehicles became an important addition to conventional field artillery . With them a saturation fire, i. H. the coverage of a large target area can be achieved in a relatively uncomplicated and inexpensive way:

In the USSR , at the beginning of World War II, an 82-mm missile and a 132-mm missile were ready for use, which were initially fired by aircraft against air and ground targets - the Katyusha missiles. These rockets used rod-shaped powder compacts as propellants . Starting in the summer of 1941, the Red Army deployed multiple launch racks mounted on trucks in large numbers, which could fire volleys of rockets within seconds. Because of its characteristic whistling noise and the visual similarity to organ pipes arranged next to each other, this weapon was called the "Stalin organ" by the German side.

The Wehrmacht countered with 15 cm and 21 cm launchers, so-called smoke launchers , which fired from mounts. For this purpose, the Wehrmacht also had Sdkfz 251s equipped with throwing frames 40 , which were nicknamed "Stuka on foot".

Artillery missiles were also used on a massive scale by Japan and the USA in the Pacific region, particularly during landing operations. At the end of the war, the Americans deployed 114 mm launchers mounted on tanks in Europe.

The advantages of this weapon lie in the simple structure of the mount (low recoil, therefore also low weight), the ease of use and the lower production costs in contrast to artillery guns . Disadvantages are the large need for propellant powder and the long reloading times. Another disadvantage is the easy location due to the strong noise and dust generation when the rocket is launched. In addition, rocket launchers - unlike tubular artillery, such as a howitzer , which could be used for this purpose, - due to the reload time and the large spread (low accuracy) for a fire fight with an enemy in the immediate vicinity (at a distance of three kilometers or less) not suitable.

Because the projectiles are more widely dispersed, the multiple rocket launcher is a typical area-firing weapon that can hit a target area that has been carefully explored in advance with a massive fire. For example, a battery of eight MLRS multiple rocket launchers with a total of 48 rockets covers a target area of ​​around 900 m × 900 m (810,000 m²). The target area is showered with a total of 61,824 bomblets (submunitions) of the rockets within seconds . It is also possible to set up mine barriers in a very short time using multiple rocket launchers. Thus, a battery of four can BM-27 systems within 20 seconds of an area of 650 m x 650 m with 19,968 pieces PFM-1S - Anti-personnel mines stock up. A minefield can be placed in the way of a fleeing enemy or the enemy can be enclosed by the mines. Such tactics were used during the Soviet occupation in Afghanistan and in the Chechen war .

The light artillery missile system (LARS) was in use in the Bundeswehr until the 1990s . It could fire 36 missiles of 110 mm caliber in 18 seconds. There were different warhead variants available, such as smoke and fragmentation grenades as well as versions for the rapid mining of large battlefield parts, the maximum range was about 12 to 14 km. The more modern MLRS is a tracked chassis system that fires twelve 227mm rockets from tubes. This system can also release modern anti-tank mines or submunitions with their own seeker head over a target area. A comparable model on the Russian side is the BM-21 with 40 missiles, which has been continuously modernized since its introduction in 1963.