When howitzers are since the 19th century guns of the artillery referred to in both the upper and the lower angle group can shoot and thereby from the field guns and mortars differ. As with cannons, howitzers can be used to fight targets with direct aiming ( flat fire ). 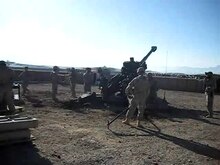 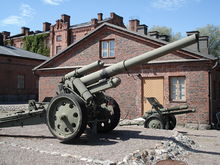 As part of the further development of the guns, field guns were also developed that can fire in the lower and upper angle group (e.g. M107 cannon ).

For indirect fire , a forward observer (VB) or artillery observer is required to observe the target area and direct the artillery fire .

In Europe, the first so-called howitzers (with a smooth barrel of medium length) appeared in Germany and Italy in the 15th century. They were used to fire stone cartridges and , from the second half of the 17th century, grenades filled with explosives. Howitzers existed in Russia from the middle of the 17th century, they were called Gakownizy , Gaufnizy (Gafunizy) . 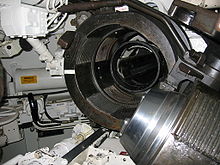 Screw cap of the self-propelled howitzer M 109 (US version)

Field howitzers are mounted on carriages that are pulled by tractors and are part of the field artillery . Not much has changed here since the introduction of this type of gun; The principle is still the same. There are special versions such as collapsible mountain howitzers and light guns that can be air-loaded . Some guns such as the FH 155-1 have an auxiliary motor in order to be able to change position independently.

Since these guns are expensive, many countries also use towed howitzers or construct howitzers with wheeled chassis. For example, France developed an unarmored self-propelled howitzer, CAESAR , on a truck chassis.