The title of this article is ambiguous. Further meanings are listed under Wagenburg (disambiguation) .

Contemporary depiction of a Hussite wagon castle from the 15th century 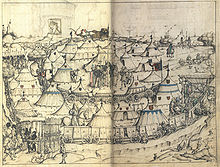 Two-row wagon castle as a field camp in the 16th century, side gates can be seen on the left, above and below. What is striking is the complete lack of draft animals, which are obviously grazing outside the wagon castle.

A wagon castle is the name given to wagons in a fleet of wagons that have been driven into a defensive formation and that perform a similar function for overnight stays or entrenchments as ramparts or walls in fortresses or castles . In the case of wagon castles, the shape of a circle or square is the main one , but other geometric figures are also possible depending on the terrain . They have been known as a useful means of protection and defense since ancient times and were used by nomads , migrating peoples and migrating armies. The best-known examples are the wagon castles of the Germanic peoples and the Hussites .

The oldest written evidence of the use of wagon castles can be found in the drama "The Phoenicians" by Euripides (5th century BC). It can be assumed, however, that long marches from the armies' supply vehicles were used to drive field camps in the style of wagon castles. Historically proven is the use of wagon castles for migrating Germanic tribes, which they also used as a retreat or last bastion during the battle. The battles of Aquae Sextiae (102 BC), Vercellae (101 BC) and Adrianople (378 AD) are examples of such an approach . In the Middle Ages, wagon castles were mentioned at different times, but with the Hussite Wars they reappeared in the general consciousness. Just as the peoples were completely dependent on wagons during the migrations, the Hussites developed great skill in quickly building wagon castles. In the Battle of Tachau (1427) the Hussites brought 3,600 wagons together to form a wagon castle. In 1447 the maneuvering of a wagon castle through the city of Erfurt is described. In Hungary , too , the use of wagon castles had been common since the battle of Muhi . If not already known, the knowledge about the wagon castles came from there to the Ottoman Empire . In their victory over the Hungarians in the Battle of Mohács (1526), ​​the Ottomans used a wagon castle. Wagon castles were also used during the German Peasants' War in the early 16th century. In the more recent modern times , the wagon castle was used by the settlers of the Wild West and the Boers , the term is also used as a designation for wagon places .

The idea of ​​using the wagons in the train to create cover for the night camp or in the event of an attack is obvious. Thanks to various reports from the time of the Hussites, some of which are fantastic but otherwise credible, a largely clear picture of the Hussite wagon castle (“Tabor”) from the 15th century emerges.

The train therefore consisted of pure supply vehicles and crew cars; the latter were manned by about 20 fighters each, armed with flails and spears, handpipes , crossbows and bows. Regulated by signal flags that were drawn up on the leading and the rear vehicle of each row, the wagon castle was raised from the movement to circular rows of closely spaced wagons. Within this outer circle, a double-row inner circle, or an inner wagon castle, was formed from the supply vehicles. After the draft animals were disengaged, the drawbars were connected to the wagon in front of them with chains. Care was taken to make a number of drop-out openings in the circle, by Spanish rider closed or with setting shields were backed armed charioteer. In order to prevent the wagons from crawling under and as a cover against fire, boards could be folded down from the brackets , and the wheels were quickly covered with debris as far as possible. Cannon barrels (" Tarasnitzen ") were tied to the outer car so that they could shoot outwards. The attacking enemy was fought after a fire strike with these guns by the defenders standing on top of the wagons and brought to a standstill. At the crucial moment, the defenders with swords , morning stars and flails broke out of the sideline gates to counterattack, while the cavalry, held in readiness within the wagon castle in the background, broke out from the rear gate, stormed around the sides of the wagon castle and attacked or pursued the enemy in the flanks.

The tactical use of the wagon castle is mainly to be able to use the otherwise rather cumbersome supply vehicles for a positive purpose in combat. The defense is sustainably strengthened by the possibility of being able to lean on this mobile attachment. The time required to set up the fortification is much shorter than that required to set up a camp like the Roman legions. The crew's energy and combat strength are not used for excavation work, but are retained almost entirely for the actual battle. Fighting wagon castles by cavalry was hardly possible; they had to be laboriously conquered in dismounted combat. With the advent of firearms , the wagon castle also offered the possibility of sheltered installation of guns such as Tarasnitzen (Terrabüchsen) and howitzers .

Wagon castles are purely defensive institutions, so they have no positive purpose in relation to the battle, aimed at resolving or ending the conflict. The wagon castle cannot force a decision, but is forced to passively tolerate. Only the deliberate cut-out of exit gates in the wagon castle enables counter-attacks that are necessary to give the battle a positive purpose. As a result, the wagon castle can also acquire value in the context of offensive-defensive campaigns, as also proven by the Hussites . Especially after the development of weapons forced tactical loosening and enabled the attacker to abruptly remove any cover that rose above ground level, the wagon castle had lost its defensive value in battle.

Descriptions from the time of the Hussite Wars and afterwards tell of fantastic maneuvers that are said to have been carried out with the wagons. After that, the wagons and the wagon castle were also used offensively. At the sign of the leader, the columns of cars are said to have divided and entered the enemy army in long lines. As a result, the enemy troops were separated from each other, got lost in the labyrinthine meanders known only to the Hussites and, thanks to the artificially created superiority of the carriage crews, could easily be crushed between the carriages. Another maneuver allegedly consisted in the fact that the wagons quickly bypassed part of the enemy army when approaching the wagon castle and thereby enclosed it in the wagon castle that was being created, where it could again be easily destroyed and the entire armed forces of the enemy weakened. Delbrück already rejected these ideas after a critical source analysis. He pointed out that these maneuvers were already severely disrupted by the failure of a horse. In addition, it would be illogical that the enemy would have tolerated driving around in his ranks.