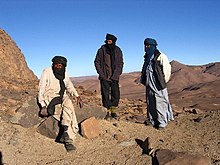 Himba women, semi-nomads in the northwest of Namibia 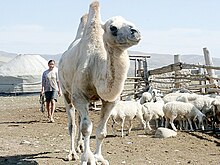 Yurt of the equestrian nomads in the Tuvinian steppe 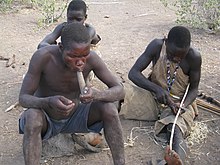 Hadza from Tanzania, one of the last hunter and gatherer peoples in Africa

As nomads ( . Give a wiki νομάς nomás , "grazing", "around wandering") are referred to people in the narrow sense, that lead for economic reasons a non-sedentary lifestyle: Mostly form with the work related migrations consistent processes, among other things, due to extreme climatic Conditions or the consequences of animal migrations become necessary, with which the livelihood can be secured throughout the year. The transfer of the term to entire societies is problematic: Often “nomadic societies” are not homogeneous . B. also permanent villages or temporary settlements in cities. Moreover, the self-conceptuality of these ethnic groups is ignored.

Traditional nomads are the members unspecialized hunter-gatherers and semi- or vollnomadisch living shepherds - or Reitervölker cold and dry deserts , steppes and tundra and the prairie , where durable flooring construction has no perspective. The (original) nomadic way of life is referred to in the German-speaking area with the term "nomadism". In many other European languages ​​(English: Nomadism , French: Nomadisme , Spanish: Nomadismo , Swedish: nomadisk livsstil ), however, there is no differentiation, so that the correct German translation would have to be "Nomadentum". For a clearer distinction, the terms " pastoral nomadism " or "pastoral nomadism " are sometimes used in German .

Moving field farmers are also rarely referred to as nomads, as they change their place of residence every three to five years for economic reasons.

The "vagabonds" called " traveling people ", however, are not counted among the nomads, as they roam around randomly. They are often not settled (only) for economic, but for cultural or ideological reasons.

Position of the nomads in settled societies

Nomads were very often suspicious of the rulers of settled peoples of all times and were not infrequently regarded as barbarians. Due to their mobile way of life, they were difficult to control, they kept moving across national borders and eluding any influence; even though they often maintained friendly contacts with settled farmers with whom they exchanged goods. Regardless, they have been persecuted and fought in every possible way, exposing them to numerous forms of discrimination and persecution.

The campaigns against the nomadic Indians of North America are well known in this context . The bison hunters of the Plains were systematically deprived of their livelihood in the 1870s by the decimation of the buffalo herds. Such "ethnic cleansing" among nomadic tribes is a worldwide phenomenon. For example, the hunted San of South and Southwest Africa were destroyed, enslaved or driven out from the middle of the 17th century to the beginning of the 20th century. The nomads of Northern Europe - the Sami - were not spared from such reprisals. With the spread of Social Darwinism , a racial separation of the supposedly “primitive” nomads from the other Swedes arose in Sweden. From the end of the 19th century until the 1920s, the government took the view that the "seed race" had to be patronized because it was unable to take on a higher cultural level. They were "protected" in such a way that, among other things, so-called "nomad schools" were set up, in which the Sami children were taught at the lowest level or the Sami were forbidden to live in "real" (rectangular) houses.

Even today nomads are subject to defamation, discrimination and social, economic, political and ethnic marginalization and in many countries they are a minority that the majority of the population does not want. There the term nomad is therefore often used derogatory.

Below are examples of ethnic groups, some of which also had a former nomadic way of life.

Herero woman in the northwest of Namibia

Turkana - are a Nilotic ethnic group in Kenya with a traditionally nomadic way of life.

The LIFE network ( Local Livestock for Empowerment of Rural People ) is a group of non-governmental organizations that mainly works with animal-keeping communities in Asia and Africa and is involved in international processes at the World Food Authority ( FAO ) and the International Convention on Biological Diversity (CBD ) uses for animal owner rights.

The word nomad has recently also been used for so-called " rental nomads ", "shop nomads" or " job nomads" ; the latter understood as people who do not seek permanent professional employment of their own accord, but who frequently change their position and, in connection with it, their place of residence. With the advent of Internet communication, the scene of “ digital nomads ” has emerged who, for various reasons, are often on the move and work from anywhere.