Ethnic Tibetans with the Dalai Lama in India (1980)

Tibetans (also outdated Tibetans , Tibetan : བོད་ མི ། Wylie : Böpa , bod pa ) are members of an ethnic group that is native to Asia . There are around 7 million Tibetans according to official estimates. Their settlement area is historical Tibet . The majority live in so-called autonomous administrative units created by the People's Republic of China (2010 census: 6,282,187), mostly in the Tibet Autonomous Region (44.81%) and in smaller autonomous units in the neighboring provinces of Sichuan (23.43%), Qinghai (20.06%), Gansu (8.18%) and Yunnan (2.37%). In Tibet, 92.77% of the population is Tibetan, in Qinghai 22.53%, in Gansu 1.76% and in Sichuan 1.54%. Many Tibetans also live in the neighboring areas of the Himalayas , for example in India , Nepal , Bhutan and Myanmar , some of them also nomadic .

About 200,000 Tibetans live in exile, mainly in Nepal , India and Bhutan . Due to immigration ( Sinization ) promoted by China , the proportion of Han is increasing , especially in urban centers.

The religious freedom of the predominantly Buddhist Tibetans is tied to the condition that no political actions are taken against China . This includes, for example, showing a photograph of the Dalai Lama . Even today, many Tibetans are fleeing persecution, mainly to India.

The approximately 3,000 Monba are closely related to the Tibetans, but are officially classified as a separate nationality and have their own written language based on the Tibetan alphabet.

A group of around 150,000 people officially classified by the Chinese government as Tibetan nationality are the Gyarongpa, i. H. "People of the Gyarong " (or rGyarong, Jiarong). They live in northern Sichuan and speak a language more closely related to Qiang than to Tibetan. Like many other ethnic groups who are culturally close to the Tibetans on the eastern edge of the Tibetan Plateau, they are Tibetans from the point of view of the Lhasa Tibetans, even if the people there have their own point of view.

In the highlands living Tibetans often have a gene variant that makes sure that the hemoglobin concentration in the blood does not increase with increasingly higher altitudes area, but stagnant. At the same time, their blood has a level of nitric oxide that is ten times that of people living at sea ​​level . The gas formed in the body ensures, among other things, that the vessels dilate. It indirectly promotes oxygen uptake and reduces pulmonary hypertension at high altitudes. Tibetans also have a higher respiratory rate, so that - in contrast to members of indigenous peoples in South America - they do not get altitude sickness .

The historical religion of the Tibetans is Bon . In the present, however, the majority of Tibetans profess Lamaist Buddhism, which is partly syncretistically mixed with Bon.

Before the occupation of Tibet by China in 1950 and afterwards until about 1959 (uprising, flight of the Dalai Lama), 10-15 percent of the Tibetan population belonged to monasteries .

Most of the original 6,000 Buddhist monasteries in Tibet were destroyed during the Cultural Revolution between 1966 and 1976, but a few have since been rebuilt and reopened. 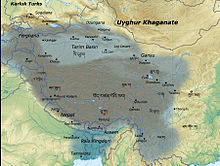 The Tibetan Empire during its greatest expansion.

In the 7th century the Tibetan Empire (" Yarlung Dynasty ") was founded under the Tsenpo ("Emperor") Songtsen Gampo , who under a skilful marriage policy influenced himself in z. T. Turkish Central Asian neighboring empires secured. This could be seen as the beginning of Tibetan ethnogenesis , the formation of the Tibetan people. Under Tsenpo Trisong Detsen in the 8th century, military supremacy over the entire highlands and thus a union of different peoples was achieved under the Yarlung rule.

In 1950, Chinese troops invaded Tibet. Chinese state propaganda described the invasion and occupation of Tibet as "liberating the Tibetan people from feudalism ". In 1959 the anti-Chinese uprising ( Tibetan Uprising ) followed in Lhasa for the independence of Tibet. This was bloodily suppressed by the Chinese occupation army. As a result, around 80,000 Tibetans went into exile with the Dalai Lama , mainly to India. Beijing responded with a scorched earth policy. At least 6,000 monasteries and temples had been destroyed by 1966. Farmers and nomads were forced to live in people's communes, thousands of Tibetans died in labor camps and as a result of famine .

In the 1980s, Deng Xiaoping did relax, but at the same time the exploitation of natural resources in the ecologically sensitive highland region began. The systematic settlement of millions of Chinese made the Tibetans a minority in their homeland.

The brutal reaction of the Beijing central government to the Tibetans' demands for autonomy can also be explained by the fear of a possible contagion effect on other minorities and the breakup of the state. Ethnic-religious conflicts should be nipped in the bud before they start a wildfire. Especially in the autonomous province of East Turkestan, which is inhabited by Muslim Uyghurs, there have been repeated bloody unrest since 1990.

Finally, the Dalai Lama emphasized that Tibet does not want any secession from China, but only more autonomy in order to be able to better preserve its own identity. But this goal, too, seems more distant than ever.