This article deals with the Tibetan capital. For other meanings, see Lhasa (disambiguation) .

It is located in a high mountain valley and was founded near a temple. It is still of great religious importance today and is home to many monks. An important sight is the Potala Palace , the former palace of the Dalai Lama .

Lhasa has been connected to the Chinese rail network since 2006. The city, which is mainly inhabited by Tibetans, has a Han population of around one third in the inner city district .

Lhasa is located in the Transhimalaya Mountains. It is located about 3600 m above sea level in the valley of the Lhasa He (Tib .: lha sa gtsang po), a tributary of the Yarlung Zangbo . The city lies on its northern bank and extends today in a west-east direction for more than 10 kilometers.

Administrative and ethnic division of Lhasa 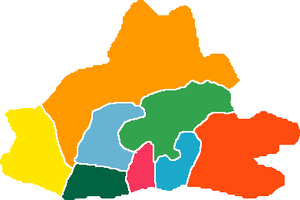 Ethnic breakdown of the population

Monks in Lhasa at the New Year celebrations, 1938

The total population of Lhasa (city) in 2000 was 521,500. According to the November 2000 census, the ethnic distribution in the urban area of ​​Lhasa is as follows (army personnel are excluded from this census):

Ethnic groups throughout the city:

The history of Lhasa goes back to the 7th century. At that time, the Jokhang Temple, still today the religious center of the old town of Lhasa, the Ramoche Temple and the first palace of the Tibetan King Songtsen Gampo (r. 620–649) on the red hill (tib .: dmar-po ri) founded. This stood where the Potala Palace is today. Two chapels located in the Potala. a. dedicated to the Greater Tibetan line of kings are considered remnants of this palace. In the 15th century, the Gelug Buddhist school built three monasteries in the vicinity of Lhasa: Sera , Drepung and Ganden . In the 17th century, the Potala Palace was rebuilt on the "Red Hill" under Ngawang Lobsang Gyatsho , the fifth Dalai Lama , and the Jokhang Temple was also enlarged.

In the first half of the 20th century, various Western personalities made trips to the city, including Francis Younghusband , Alexandra David-Néel , Heinrich Harrer and Peter Aufschnaiter .

Word history of the name

Today the meaning of the name Lhasa is usually given as Tibetan “place of gods”. In the time of the Yarlung Dynasty , this place was named (Tib. :) rva-sa, which meant a fenced pasture. The interpretation “goat pasture” is also possible. This is also reminiscent of the name of this place in today's Lhasa dialect. Here the name is pronounced with API ɬ ̄ɛ: s ̄a, which corresponds to the written Tibetan “lhas sa”. This in turn means “fenced place” (rva sa). Ultimately, it should also be noted that tib .: lha was also the name for the Tibetan kings regarded as divine, so that Lhasa was initially understood as the “place of kings” and was later reinterpreted as “place of gods”.

Roads lead to the provinces of Sichuan ( Chengdu ), Qinghai ( Xining ) and the neighboring country of Nepal . Lhasa is on the G318 national road , which runs from Shanghai via Wuhan , Chengdu, Garzê , Litang , Batang , Markam , Bayi to Lhasa and from there via Samzhubzê and Lhazê to Kathmandu in Nepal or from Lhazê as G219 via western Tibet to Kargilik at Yarkant in Xinjiang . Lhasa is also at the end of the G109 national road , which runs from Beijing via Datong , Dongsheng , Lanzhou , Qinghai Lake and Golmud to Lhasa.

Since the completion of the Lhasa Railway on July 1, 2006 , with an apex of 5,072 m, the highest railway line in the world and the highest station at 5,068 meters, Lhasa has been connected to the Chinese railway network. This cuts the travel time from Lhasa to Beijing to around fifty hours. The Lhasa Railway Station is located in the development area on the south bank of the Lhasa River. On August 15, 2014, a 253-kilometer extension to Xigazê was put into operation.

The airport of Lhasa is located 45 km to the south in the district Gongkar .

According to the tradition of Tibetan Buddhism, there are three concentric pilgrimage routes in Lhasa . The innermost route, Nangkhor , includes a walking tour in the courtyard of Jokhang Temple. The middle route is called Barkhor and includes a walk around the Jokhang Temple and other monasteries and temples in the old town. The outermost route, called Lingkhor , follows the earlier city limits. This part of the old town is now also open to tourists.

The main attraction in Lhasa is the Potala Palace , the former palace of the Dalai Lama .

The Tibet Museum , which opened in 1999, shows more than 30,000 exhibits from Tibetan culture (see Buddhist art ).

Tibet University, founded in 1985, is located in Lhasa.

The climate of Lhasa is characterized above all by enormous temperature fluctuations between day and night.