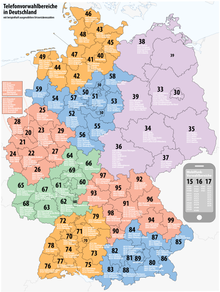 A telephone area code is a sequence of digits that you enter when dialing a telephone number in order to change the logical location.

A code consists of the traffic elimination number (VAZ) and the local area code (ONKZ).

The logical location can also be a non-geographical number range (in Germany the phone code 032 ), an independent telephone network (e.g. mobile phone codes ), a service ( e.g. service numbers ) or a so-called "economy code" for the Act call-by-call procedure for the use of a specific network operator .

General information on history and necessity

Since then, the telephone area code in many countries has consisted of a traffic code and the actual area code. For example, if you want to make a call to Berlin within the German telephone network , you dial the sequence "030". The zero at the beginning is the traffic elimination number, the "30" the identifier for Berlin. For more information on the exact process, see under switching center .

For international telephone prefixes there is a different traffic elimination digit or (as an extension of the hierarchy) additional digits. In most countries this is "00"; the first digit then means "beyond the local level", the second "above the national level". In order to be able to uniformly note the resulting regional digit combinations, a “+” is also written for this, which is also used in cellular networks.

The situation of the telephone prefixes for IP telephony is somewhat more complicated and is described there.

There are different types of area codes:

Countries with mandatory use of the area code in all cases

Countries with mandatory use of the area code (in yellow)

In France (1996), Portugal (1999), Denmark , Norway , Italy , Belgium (July 2000), Switzerland (March 2002), the Czech Republic (September 22, 2002), Greece , Poland (December 5, 2005), Bulgaria ( March 10, 2011), Spain and Estonia have introduced the mandatory use of the area code, even if it is only a local call. One advantage of the method is that 11% more numbers are available per local network, as the number for special numbers (usually 1) or even the traffic elimination number (usually this is 0) are also used directly after the local area code can. Numbers that do not start with the traffic elimination number can also be used for special services and mobile telephony . Such a regulation is also a prerequisite for enabling the number portability of any subscriber number even when moving beyond local network borders, which has been implemented in Switzerland, Estonia, the Czech Republic and Luxembourg, for example ( see 032 numbers in Germany).

The implementation of the European Universal Service Directive 2002 and other efforts to porting or porting phone numbers (for mobile phones: Mobile Number Portability , MNP) limits the area code in its routing function, since the destination network is no longer fixed. This is a problem in particular for least cost routers , which should find the cheapest connection to the destination.

In Germany, a so-called fixed number (a number with an area code, i.e. practically all normal numbers in the fixed network) can only be assigned to subscribers who are actually located in the area of ​​this number. Therefore, in Germany the porting of local phone numbers is only possible within the area of ​​the local area code. However, this porting must be enabled when changing the provider ( Section 46 TKG ).

There are also places with multiple area codes. An example is the municipality of Büsingen , a German exclave in the canton of Schaffhausen in Switzerland .

There are also two different postcodes .