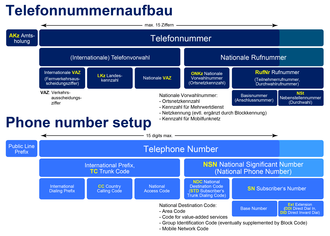 In a narrower sense is an international dialing code, the sequence of digits that a caller on the phone dials to the logical level of another national telephone network to reach. It consists of two parts:

The traffic elimination number (VAZ) depends on the country you are in. The ITU recommends the "00", as it is already common in most European countries.

Telephone prefixes from countries that use the traffic elimination digit (s) "00" for the international level according to different countries:

In all current cellular networks with the current ( GSM ) standard, you can also enter "+" directly instead of the number chain.