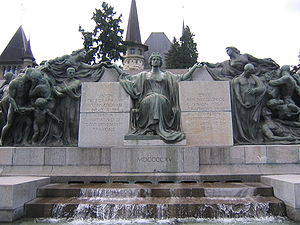 World Telegraph Monument in Bern , Switzerland , with the following text on the panels:
“ Union Télégraphique Internationale fondée à Paris en 1865 sur l'initiative du gouvernement français. Érigé par décision de l'Union Télégraphique prize à la conférence internationale de Lisbonne en 1908. “
Translation:
" International Telecommunication Union, founded in Paris in 1865 at the suggestion of the French government. Established according to the decision of the Telecommunication Union on the occasion of the international conference in Lisbon in 1908. "

The goals of the ITU are coordination and promotion of international cooperation in the communications sector through:

State governments, private sector companies and other regional and national organizations work together in this framework. The basis of the ITU is the constitution and convention of the International Telecommunication Union ( Geneva 1992), which defines the tasks, rights and duties of the ITU organs.

The official and working languages ​​of the ITU are Arabic , Chinese , English , French , Russian and Spanish , with the French wording being authoritative in cases of dispute or doubt. Accordingly, the Union also has six different names under which it publishes documents.

The superordinate bodies of the ITU, the Plenipotentiary Conference and the World Conference work on general principles and general conventions. The ITU study groups, on the other hand, do the real work: They work on technical issues that they discuss in regular meetings. The results are published as recommendations and only have the character of standards when they have been adopted by normative organizations such as ISO , ANSI or ETSI or by national regulatory authorities such as the Federal Network Agency in Germany . The ITU-T's cooperation with forums and consortia is regulated in particular in Recommendations A.4, A.5, A.6 and A.23 (together with A.23, Annex A).

ITU organizes the ITU Telecom trade fairs , with world fairs since 1971 and regional fairs in Asia, Africa and Latin America since 1985.

Structure of the ITU

The ITU is divided into

The ITU-R sector is responsible for technical and operational issues, especially regarding radio communication, to carry out studies and to issue recommendations, without any restrictions on the frequency ranges. The responsibility of this sector includes the areas of space radio services, terrestrial radio services and the regulations for radio services (VO radio), including the associated study groups.

Most of the standards (strictly speaking “recommendations”) are adopted within the ITU by the ITU ‑ T ( Telecommunication Standardization Sector ). In contrast to national standards such as DIN, RS or ANSI, these recommendations are recognized worldwide.

The areas of the ITU-T are:

Recommendations are marked with a letter for the area, a period and a number. Similar versions are e.g. B. marked by a trailing “to” or “ter”. Well-known examples of ITU-T recommendations are V.24 (interface lines for data transmission), JPEG (image compression), H.264 (video compression) or E.164 (international telephone numbering scheme).

These recommendations were originally published after the end of a study period (every four years) in individual volumes, sorted by topic and assignment to study groups; all volumes were the same color. The unofficial linguistic usage therefore uses the terms “Yellow Book” (1972–1976), “Orange Book” (1976–1980), “Red Book” (1981–1984) and “Blue Book” (1985–1988). Thereafter, the recommendations were published individually, at the earliest after two consecutive plenary meetings of the responsible study group (usually nine months). The recommendations are currently published either according to the TAP (Traditional Approval Process) or the AAP (Alternative Approval Process). The TAP procedure (after two consecutive plenary sessions) is used if regulatory aspects are also involved in addition to technical issues. The AAP procedure is used for purely technical recommendations; publication is then already possible after four weeks (after the plenary meeting of the relevant study group).

Directors and General Secretaries of the ITU