The environmental program was launched in 1972 at the United Nations Conference on the Human Environment  (UNCHE) with UN resolution 27/2997 of December 15, 1972. As he sees himself, the program is the “voice of the environment” at the UN. UNEP acts as a trigger, advocate, teacher and mediator for the careful use of the environment and sustainable development . It works with various partners, including other UN agencies, other international organizations , governments, non-governmental organizations and companies .

The highest decision-making and steering body of the program is the United Nations Environment Assembly .

UNEP participates in the Global Compact and in the organization of World Environment Day .

The main decision-making body of the environmental program is the United Nations Environment Assembly , in which all UN member states are represented. With its decisions it defines the priorities for the work of UNEP. The UN Environment Assembly has met every two years since June 2014. It replaces the UNEP Administrative Council and the former Global Environment Ministers Forum. This reform was decided in 2012 at the United Nations Conference on Sustainable Development and implemented by a decision of the UNEP Administrative Council in February 2013.

Before 2014, UNEP was  controlled by a Governing Council (GC), in which representatives from 58 countries sat for three years each. The distribution of the seats followed a regional key. The GC has been the main steering body of UNEP since 1972, it develops guidelines for UN environmental work and at the same time formed a forum for international cooperation in environmental protection. Like non-governmental organizations, non-members were admitted to the Council's meetings as observers. The GC met regularly every two years.

In 1999 the Global Ministerial Environment Forum ( GMEF ) was founded and met once a year. At the same time, a special meeting of the Governing Council was held, which thus de facto also followed an annual meeting rhythm.

UNEP receives its funding from a total of three sources: the Environment Fund , the regular budget and earmarked grants. For 2017, the organization had revenues of $ 668 million and expenses of $ 562 million.

When UNEP was founded in 1972, the General Assembly decided to pay the direct costs of the Secretariat from the regular UN budget. This contribution covers only a small part of the expenses of the UN environmental program. For 2006 and 2007, US $ 13.4 million was allocated on this basis, or 5.1 percent of the total budget.

In order to carry out activities going beyond this, the states set up the Environment Fund at the same time as UNEP . For a long time, this accounted for the largest share of the UNEP budget, but has been overtaken by earmarked grants in recent years. The Environment Fund is funded through voluntary donations from UN member states. From 2004 to 2006, grants were nearly $ 60 million annually, increasing to nearly $ 70 million in 2007 and nearly $ 90 million in 2008.

The specific grants ( earmarked contributions ) and funds through Trust Fund ( Trust Fund ) are now the most important sources of funding for UNEP activities. They are provided by states, international organizations or private actors. In 2006 and 2007 these sources combined provided $ 156.1 million, and the 2008-2009 budget was expected to total over $ 200 million. The largest single item within the earmarked grants is taken by the Multilateral Fund , which finances measures under the Montreal Protocol to protect the ozone layer . 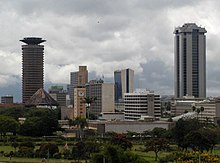 The Nairobi skyline , seat of the UNEP Secretariat

The UNEP Secretariat is located in Nairobi, Kenya. This makes the environmental program the only subsidiary body of the United Nations with its seat in a developing country . This decision was and is not without controversy, above all because of the difficult on-site networking with other organizations and the difficulties of being able to recruit top-class staff. At the same time, however, the decision in favor of Nairobi was a major reason for the African states to even consent to the establishment of UNEP.

On March 15, 2006, Achim Steiner , former chairman of the IUCN , was nominated in Nairobi by UN Secretary General Kofi Annan as successor to Klaus Töpfer for the office of Executive Director of UNEP and elected one day later by the UN General Assembly. He took office on June 15, 2006.

The secretariat employs 890 people. Around 500 of them are international employees of the United Nations, the remaining 300 are local employees.

The Secretariat is in charge of implementing UNEP's mandate and programs. This work is done by seven departments:

In order to be present in the various regions of the world, UNEP maintains a network of six regional offices covering Africa, Asia-Pacific , Europe, Latin America and the Caribbean, North America and Western Asia .

UNEP is headed by an Executive Director with the rank of Under Secretary-General. So far, the following people have held this office:

A number of other institutions and organizations in the individual departments are working to assist UNEP.

Since it was founded in 1972, the UN environmental program has been accompanied by a discussion about its reform.

From the Nairobi Declaration to the Belgrade Trial

One possible reform effected in the discussions about the establishment of a UNEO , WEO or or otherwise called World Environment Organization recognize that could take the place of the UN Environment Program. As an international organization or the main body of the United Nations, such an organization would have a more stable financial basis and, as a subject under international law, would have its own legal personality .

In contrast to the existing environmental program, the establishment of an international organization for environmental issues is intended to unite or at least bring together the highly fragmented UN environmental architecture under one roof. There are currently over 500 multilateral environmental agreements , many of them with independent secretariats and without any links to one another. These include the Global Environment Facility (GEF) in the hands of the World Bank , the United Nations Forest Forum (UNFF) or the numerous conventions, e.g. B. the Framework Convention on Climate Change , the United Nations Convention to Combat Desertification or the Biodiversity Convention . The numerous environmental agreements could be better coordinated under the umbrella of a single organization and their synergy potential could be better used. This could help to counter pressing environmental problems such as global warming or increasing desertification more effectively.

As a program, UNEP does not receive any regular payments according to a fixed key and is dependent on relatively arbitrary and voluntary contributions from UN member states and other funding organizations. The creation of a legally binding new agreement for a UN environmental organization could ensure financial planning security and significantly advance the implementation of studies and projects.

In addition, by upgrading to organization, environmental issues could play a greater role in other intergovernmental regimes. The World Trade Organization (WTO) is mentioned as an example , to which one can move more on an equal footing.

Finally, there are considerations on the (partial) merging of environmental and development work in the United Nations. A UNEO could better coordinate with the UN Development Program (UNDP) if the fragmented nature of current UN environmental work were better organized.