The leadership of the development program is the third highest office in the hierarchy of the United Nations , immediately after the Secretary-General of the United Nations and his deputy. The UNDP Executive Committee consists of representatives from 36 countries around the world who are appointed on a rotating basis. The United Nations Office for Project Services was spun off as an independent organization UNOPS in 1995 .

The headquarters are in New York , with further branches in Europe ( Geneva , Brussels , Copenhagen ), Japan ( Tokyo ) and the USA ( Washington, DC ).

The UNDP is financed entirely from voluntary contributions from UN member states. The organization has country offices in 166 states. From these headends, UNDP works with local governments. In addition, UNDP helps the respective developing countries to achieve the goals of the Millennium Summit ( Millennium Development Goals ).

UNDP promotes by providing advisory capacities , training and grant funds. There is an increasing focus on promoting the so-called Least Developed Countries . In order to achieve the Millennium Development Goals and advance global development, UNDP focuses on poverty reduction, HIV / AIDS , democratic governance, energy and the environment, and general crisis prevention. The cross-sectional task in all programs is the protection of human rights and the equal treatment of women. The 1994 program also coined the concept of human security , which, among other things, influenced the reform discussion about the United Nations. Every year around 62 billion US dollars flow into the development program, most of which is provided by the G7 countries.

UNDP was founded in 1965 to combine the Extended Technical Cooperation Program, which had existed since 1949, and the United Nations Special Fund created in 1956 . In 1971 the two organizations were finally fully integrated.

In 1995 the United Nations Office for Project Services (UNOPS) was spun off from UNDP as an independent service organization. UNOPS takes over the management and implementation of programs on behalf of the UN organizations. One example is UNOSAT .

The total budget of UNDP in 2012 was approximately $ 5 billion.

Democratic governance
UNDP supports the transition to democratic systems through policy advice and technical assistance. The aim is to strengthen the institutional and individual skills in the respective developing countries . This also includes training broad sections of the population with regard to democratic reforms, promoting negotiation and dialogue, and conveying experiences from other countries and regions.

Poverty reduction
UNDP helps countries develop strategies to reduce poverty. The poverty targets are linked to the overarching development goals of the countries, so that poor sections of the population also have a greater influence in the overall development context. At the macroeconomic level, UNDP works on reforming international trade relations, debt relief and promoting foreign investment.

Crisis prevention
UNDP works to reduce the risk of armed conflict and disputes. As examples of measures to reduce risk in advance, efforts to curb the spread of small handguns were supported, strategies to reduce the effects of natural disasters were developed and programs to promote the use of diplomacy were developed.

energy and Environment
As poorer countries are disproportionately affected by the destruction of the environment and there is no access to clean and affordable energy, the UNDP endeavors to address environmental issues in order to enable sustainable development in developing countries at the same time. This is done, among other things, through innovative policy advice and networking with other partners. The UNDP's environmental strategies focus on efficient water management, access to sustainable energies, sustainable agriculture to combat desertification and land destruction, the preservation and sustainable use of biodiversity , and the development of a policy to control pollutant emissions and substances that damage the ozone layer . 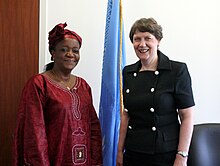 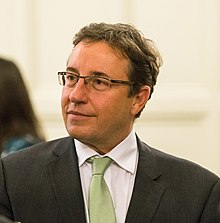 Helen Clark , the former Prime Minister of New Zealand , has been the UNDP's administrator since 2009. Helen Clark won the election by the UN General Assembly against several candidates favored by the US government .

On April 18, 2017, UN Secretary General António Guterres wrote a letter to the President of the UN General Assembly in favor of German environmental and political expert Achim Steiner as the future administrator of the UN development program. On June 19, 2017, Steiner took up his position as administrator of UNDG.

The report, which became known in November 2010, shows that the living conditions and chances of most people on earth have improved considerably in the last 40 years - but in most cases regardless of the economic development of their home country.

There are so-called goodwill ambassador (English Goodwill Ambassadors Global ) which is engaged by virtue of their position in society for the fight against poverty. These include the athletes Didier Drogba , Kaká , Ronaldo , Maria Sharapova and Zinédine Zidane , the actors Julia Ormond , Misako Konno , Antonio Banderas and George Clooney , the actor Harry Belafonte , the writer Nadine Gordimer , the women's rights activist Mona Abu Suleyman , the singer Svyatoslaw Wakarchuk and Crown Prince Haakon of Norway .