Hierarchy (pronounced [ hirarˈçiː ] or [ hi̯erarˈçiː ]) is the hierarchy of people , animals or things among each other. The complement is the heterarchy .

The word hierarchy comes from the old Gr. ἱεραρχία ( hierarchia ), composed of ἱερός ( hieros , "holy") and ἀρχή ( archē , "leadership, rule ") and initially referred only to religion . Towards the end of the 6th century it appeared through Pseudo-Dionysius Areopagita as a hierarchia for the office of high priest (in Greek ἱερεύς , hiereús , "temple priest"). The priests were divided into 24 priestly classes and weekly departments ( Greek ephaemería ), their order and their priestly service being determined by lot ( 1 Chr 24,1-19  EU ). In the angel doctrine of the Pseudo-Dionysius Areopagita, the hierarchical order of the angels also played a major role. The church Latin "hierarchia" first appeared in 1685 by Veit Ludwig von Seckendorff as "the hierarchy or the priest regiment in the Roman Church". In 1727, Sperander once again referred to the angelic hierarchy.

Hierarchy is a step-like manner on superordination and subordination based order , on the rule and submission is based. The elements of this order are positioned in a vertical order according to their importance for decision-making power , competencies and rank. The order of a system is necessary if it consists of at least two elements whose relationship to one another has to be clarified by hierarchy. In the case of a monohierarchy , each element has at most one other element directly above it, while in a polyhierarchy there are several superordinate and subordinate elements. In the monohierarchy, the classes are hierarchically related to each other and each class only has one superclass ( tumor as an upper class, for example, only has benign and malignant tumors as a subclass). From a mathematical point of view, a hierarchy requires an order relation that defines a tree (monohierarchy) or directed acyclic graphs (polyhierarchy).

Hierarchies form people , associations of people and the animal world .

The ideal of a hierarchical structure assumes that the structure defines a methodology for leadership and cooperation that uses a specific strategy of bidirectional communication. Associated with this are filter concepts that prevent the information from being overturned from bottom-up . This hinders the fiction that the upper hierarchies know about details. On the other hand, a concept of escalation for conflicts must be defined, conveying information from the bottom up or allowing access to information from the top down. On the other hand, according to the classical organizational theory, ruling through several levels is counterproductive.

The original form is the hierarchy in the family , whose social relationship was already evident in antiquity as patriarchy or matriarchy . The former is shaped by the rule of fathers and men ( Latin pater familias ). In Roman law, Ulpian referred to a family as "several people who are naturally or legally subject to violence by an individual, such as the householder ( Latin pater familias ), the mother ( Latin mater familias ), the house son ( Latin filius familias ) , the house daughter ( Latin: filia familias ) and whoever follows them in the same way ”. They made all the important decisions and the rest of the family had to give in. The family was characterized on the one hand by authority ( Latin auctoritas ) and obedience ( Latin obsequium ), but on the other hand, reliability and the duty of care are also an important component. During slavery , slaves or, in feudalism, serfs were subject to their owner. Important authorities were also the village elder , chief , pastor and later the teachers . The people, made up of families, were in turn subject to the nobles ( kings , emperors , dukes , princes ). Anyone who, as a subject, did not adhere to the permissions , commands or prohibitions of higher-ranking officials had to expect sanctions ( insubordination ).

The religiously based caste system ( Portuguese casta , "race") of the Indian subcontinent is strictly hierarchical and has cultural and social effects on many areas of life in India to this day. The caste determines a person's social status and also their own perception and expectations of life. The caste ( Hindi jati ) is a social group that feeds together, marries endogamously and pursues a similar job. There is a common division into priests / state officials / judges / doctors ( Hindi brahmins ), scribes ( Hindi carans ), aristocracy ( Hindi paika ), traders and employees ( Hindi bhandari , banians ), craftsmen / service personnel ( Hindi sudras ), cowherd and Peasants ( Hindi gouda , chasa ).

With the emergence of artificially created associations of persons ( clubs , churches , corporations , companies , military , political parties ), hierarchies were also created for these, which are based on the system of command and obedience . The strictest hierarchies exist in the military and public administration , they are even established by law.

Günter Wöhe defined the operational hierarchy as the superordinate and subordinate order of organizational units . If these organizational units have the same functions , competencies and responsibilities in a company , there is a secondary or equal order . Line span and line depth contribute to the formation of hierarchies. The smaller the management range, the greater - with the same number of employees - the management depth (number of hierarchical levels). In large companies in particular, there are further management levels belonging to the hierarchy, such as department heads , department heads , group leaders , team leaders and clerks, below the board of directors or the management as the top hierarchy level . In Germany there are generally five levels of the company hierarchy, namely management , main department , department , group and sub-group . The number of people per hierarchy level decreases from bottom to top, while functions, competencies and responsibilities increase at the same time. Hierarchies exist even within the workers ( foreman , laborers ) and employees ( officer , agent).

Command hierarchy is the expression for the disciplinary enforcement of orders after decisions from top to bottom; Management hierarchy is the bureaucratic form of organization that is characterized by increasing delegation . Because of the high overhead costs , associations of persons try to save personnel costs through flat hierarchies (management range) or lean management (management depth) . Nevertheless, advancement within these levels is possible through a career through promotion ; a descent through demotion or dismissal cannot be ruled out. Hierarchy levels are often also defined via the report level , which means those positions in the organizational structure ( line organization ) that have information obligations (reporting obligations) to a higher-level position.

In general, hierarchies cannot be recognized directly, but they have to be made perceptible through actions , communication or knowledge . Military hierarchies, on the other hand, in the military - as in the case of judges or the police - can be read from clothing, especially through badges of rank and rank . The military uniform is for the rank insignia of epaulettes , collar patches or armband . Military hierarchies are a system of rule with a "fixed hierarchy, precisely delimited powers and clearly defined instructions , command and communication structure". The service position is the determining factor for the hierarchy level, while the rank reflects the position of a soldier within a military hierarchy . Military orders are therefore allowed to issue military superiors to lower-ranking soldiers, the latter are obliged to obey ( Section 2 No. 2 Military Penal Act ).

Many religions - in which the hierarchy began - are structured strictly hierarchically. See the list of religious office and function titles . 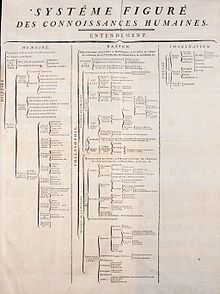 In the animal world, a distinction is made between two main types of hierarchy, namely the systematics of animals descending into kingdom , tribe , class , order , family and species, as well as the hierarchy . The latter is particularly pronounced in the wolf pack with the alpha animal as the pack leader.

Hierarchies are also generally used to organize objects. Hierarchies are often compared to a pyramid or a family tree . The elements can be clearly arranged in levels, with each element (apart from the topmost) only being connected to one (monohierarchy) or several (polyhierarchy) elements of the next higher level.

Special types of hierarchical structures, which are also often used synonymously, are classifications or taxonomies . In biology, living beings are classified according to various criteria in a hierarchical system , while a person's family tree can theoretically be clearly identified.

The organizational units of an authority are divided generally into divisions , departments , departments , functional areas , departments and groups . This hierarchy is often based on a factual system and also depicts the geographical breakdown of a state into administrative units .

In jurisprudence, the hierarchy of norms is the superordinate and subordinate relationship of legal norms . After the collision rule ( latin Lex superior derogat legi inferiori ) has a higher standing in the hierarchy standard application priority before a lower stationary standard, special laws ( latin Lex specialis ) take precedence over general laws ( latin Lex generalis ). This applies not only to laws in contract law have individual agreements take precedence over general terms and conditions or terms and conditions . In property law , the main thing is the designation for things to which other things are subordinate. This includes their components , essential components and accessories .

The judiciary and its instances are also strictly hierarchically ordered , each of which can overturn judgments of the subordinate instance. The highest German instance of civil and criminal law is the Federal Court of Justice , whose final jurisdiction binds the lower courts.