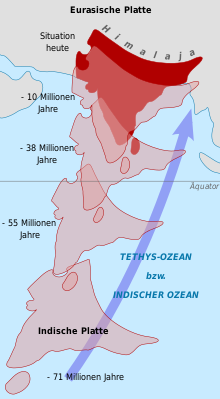 Chronological course of the shift of the Indian subcontinent

The Indian subcontinent is the land mass south of the Himalayas and part of South Asia . The majority of the region is occupied by Indian territory , other states with territorial shares in the subcontinent are Bangladesh , Bhutan , Nepal , Pakistan and Sri Lanka . Geographically, the Indian subcontinent can also be described as a natural boundary by the two rivers Indus and Ganges ; the eponymous Indus is the longest river on the subcontinent with 3,180 km, it is the most important river in Pakistan; the Ganges (2,511 km long) is the most important river in India and Bangladesh.

This region is known as the "subcontinent" because the landmass is not part of the Eurasian plate , but part of the Indian plate . In the history of the earth , this land mass was part of a lithospheric plate that broke away from the great continent of Gondwana and moved north from the southern hemisphere . As a result of the collision with the Eurasian Plate , the Himalayas unfolded and a land connection with Asia was established .