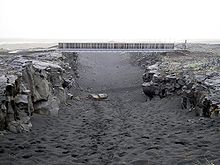 The Eurasian plate is one of the largest continental plates (tectonic plate) on earth. Its western continental part is also known as the European plate , especially in connection with the formation of the Alps . The Eurasian plate forms almost the entire Eurasian major continent , with the exception of the Indian subcontinent , which is part of the Indian plate , and the Far East of Russia , which is part of the North American plate . The continental plate also carries Indonesia , the Philippines , southern Japan and part of Iceland . The western half of the earth's oceanic crust is covered by the North Atlantic and large parts of the Arctic Ocean .

The mid-Atlantic ridge separates the Eurasian plate from the North American plate and separates the two continents there by around 2 cm per year.