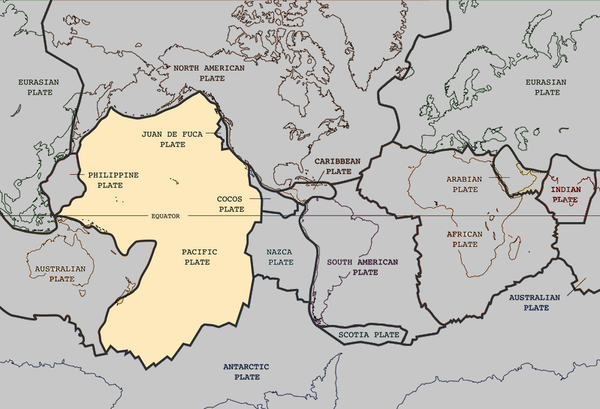 Size and Position of the Pacific Plate.

The Pacific plate is the largest tectonic plate (also called lithospheric plate) on earth. With the exception of a few peripheral areas, it forms the subsurface of almost the entire Pacific Ocean ; Experts estimate their size at around 108,000,000 km². The Pacific plate consists of oceanic, i.e. heavy, basaltic, earth crustal rock.

The Pacific plate is bordered (clockwise) to the North American Plate , the Juan de Fuca Plate , the Cocos , which Nazcaplatte , the Antarctic Plate , the Australian Plate and the Philippine Plate . There may be a few other smaller plates in the transition zones to the large neighboring plates; its existence has not yet been clarified beyond doubt.

In the course of plate tectonics - i.e. the constant movement of the plates that form the lithosphere ( earth's crust and uppermost mantle ) - the Pacific plate shifts in a north-westerly direction at a speed of around 10 cm per year. Depending on the direction of movement, different geological processes take place in the transition zones to the neighboring plates. For example, the plate boundaries in the northeast (to the North American and Juan de Fuca plates) are diverging - that is, they are drifting apart. Here, the movement of the plates creates a rift zone (or rift valley). A converging - contracting - plate boundary exists among other things at the transition to the Philippines plate. Here the Pacific plate is pushed under the Philippines plate ( subduction ), which creates the Mariana Trench . In California , the movement of the Pacific Plate is transverse to that of the North American, creating the San Andreas Fault .

Much of the edge of the Pacific Plate is part of the Pacific Ring of Fire , the zones of high tectonic activity in which the majority of all active volcanoes on earth are located.