The Mariana Trench , also known as the Mariana Trench , is a deep sea channel (deep sea trench) in the western Pacific Ocean , in which the deepest part of the world ocean lies with a maximum depth of about 11,000 meters below sea ​​level and which is about 2400 (2500) kilometers long. The water pressure at the lowest point is around 107 megapascals . Like the Mariana Islands, it was named after the Spanish Queen Maria Anna of Austria .

Far north of the equator , the Mariana Trench runs directly east of the chain of islands belonging to the Micronesian Islands of the Mariana Islands . It is located on average around 2000 kilometers east of the Philippines , north and south of the Marian island of Guam . With its deepest known point of around 11,000 meters, the trench is considered the deepest seabed on earth. To the north, this semicircular deep-sea channel flows into the Boning Rift , which is followed further north by the Japangraben . In the north lies the Marshall Basin , in the south the Caroline Islands , in the southwest the Yapgraben and in the west - behind the Mariana Islands - the Philippines Basin . There the Mariana Trench lies between about 12 ° and 25 ° north latitude and 142 ° and 147 ° east longitude . The trench itself has a length of about 2,400 kilometers.

The Mariana Trench is part of a system that also includes the West Mariana Ridge, the Mariana Basin ( Backarc Basin ), the Mariana Arch and the Mariana Forearc Basin. The West Mariana Ridge is the western edge of a former island arch that split a few million years ago. Its two parts have since moved away from each other at a speed of a few centimeters per year, which is how today's Mariana Basin was created. The trigger was the tensile forces generated when the ocean floor plunged into the Earth's interior - the location of the Mariana Trench.

West, central and east pools
in the Mariana Trench
Witjastief in the east pool

In the Mariana Trench there are, among others, these sea ​​lows :

Cross-section through the Mariana Subduction Zone

The Mariana Trench forms the eastern part of the deeply incised seam between the Philippine plate in the west and the Pacific plate in the east. Here an older oceanic plate subducts under a younger oceanic plate. The subducted Pacific plate is over a hundred and fifty million years old in the area of ​​the Mariana Trench and accordingly the oceanic lithosphere there has become very heavy and thick since its formation (as it cools, both the density and the thickness of the lithosphere increase).

Exploration of the Mariana Trench 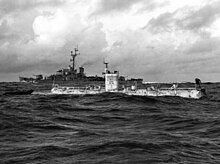 The research vessel Trieste shortly before its diving record (1960)

On February 23, 1875, the crew of the HMS Challenger sounded out the deepest measured point in the world's oceans at 8,164 meters in the Mariana Trench.

In 1899 the US ship “Nero” determined a sea ​​depth of 9,660 meters in the Mariana Trench using wire sounding.

In 1951 the crew of the English survey ship "Challenger II" determined a depth of 10,899 m with echo sounding (10,863 meters by wire sounding ); this place was given the name Challengertief.

In the International Geophysical Year 1957, the Vite Deep 1 (11,034 meters) was discovered by the Soviet research ship of the same name in the Mariana Trench.

On January 23, 1960, the Swiss Jacques Piccard and the American Don Walsh explored the channel with the Trieste submersible and descended to 10,916 m ( Trieste Deep).

More recently (1997/2001), for example, the Hawaii Mapping Research Group (HMRG) has devoted itself to mapping the Mariana Trench.

In 2012 James Cameron penetrated the deepest point of the sea with the submarine " Deepsea Challenger ". He collected data there for a good three hours and filmed the deep sea world (10,898 m). After Jacques Piccard and Don Walsh (10,916 m), Cameron is the third person to reach the lowest point in the world's oceans.

In 2018, researchers discovered microplastics in the benthal of the Mariana Trench.

The following important information is missing from this section:
Measurement controversial, see Witjastief 1 (remains) .
Help Wikipedia by researching and pasting it .

At first the Galatheatief in the Philippinengraben with a depth of 10,540 meters was considered to be the deepest point in the oceans , since 1957 the Vitja Deep 1 in the Mariana Trench with 11,034 (echo sounding) meters holds this title; numerous sources give the depth there as 11,022 (wire soldering) meters. Meanwhile, some doubts about the measurement have arisen. That is why the Challenger Deep with 10,984 ± 25 m below sea level is also a candidate for the deepest point in the world's oceans.

The deep-sea fish Pseudoliparis swirei occurs in the Mariana Trench, and according to current knowledge is the deepest fish species. Live specimens were filmed at depths of 6,198 to 8,098 meters.

On January 18, 2009, the Mariana Trench was declared a National Monument of the United States by President George W. Bush . A survey carried out in 2011 by geoscientists from the University of New Hampshire in the USA with an underwater robot was intended to examine whether the USA was entitled to larger marine regions around the US American islands of Guam and the northern Mariana Islands. The results were published at the end of 2011. A sea zone of 200 nautical miles belongs to the respective national territory according to international recognition. The university's researchers have identified four underwater mountains on their maps that could be considered an extension of the American territory from Guam and the northern Mariana Islands.