This article covers the island area. For the state, see Federated States of Micronesia .
Micronesia

Micronesia (from ancient Greek μικρός mikros "small" and νῆσοι nēsoi " islands ", so "small islands") is an island area in the western Pacific Ocean .

Micronesia is a collective term for an "archipelago" of over 2000 tropical islands and atolls , which are scattered over more than seven million square kilometers of the western Pacific Ocean. Geographically, most of the islands are north of the equator . The distance from one end of Micronesia to the other is almost 4000 kilometers. Micronesia consists not only of one country, but of several independent countries, most of which used to belong to the Pacific Islands Trust Territory .

Micronesia consists of several archipelagos, each with its own culture, language and history. The Marianas are divided into the American Guam and the Northern Marianas associated with the USA , the Carolines consist of the island groups of Yap , Chuuk , Pohnpei and Kosrae , which belong to the Federated States of Micronesia , and also the independent Palau ( Belau ). Together with the Marshall Islands , but without Guam, these islands formed a German colony before the First World War, later a Japanese League of Nations mandate, and after the Second World War a UN trust territory under US sovereignty. The former British Gilbert Islands now form the core of Kiribati . Nauru had been a German protectorate since 1888 and, after the First World War, a League of Nations mandate and UN trust territory under Australian-British-New Zealand administration.

The Micronesian islands are not only far apart in terms of geographic distance, but also culturally. The traditional ways of life of the indigenous people are very different, shaped by the different history, geographical size and geological composition of their respective island groups. Nevertheless, Micronesia is often viewed as a common cultural area. 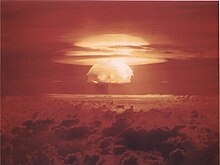 Most of the islands were settled around 4,000 to 3,000 years ago, mostly from the Malay Archipelago and Melanesia . The first Europeans to sail the waters around the islands in the 16th century were Spaniards. Apart from the Marianas, which were of strategic importance as a stopover for the journey to the American colonies, they did not initially take possession of the islands. That changed in the 18th and 19th centuries when many of the islands were popular ports of call for whalers. Spain took possession of the western islands neighboring the Philippines , Great Britain had claimed the Gilbert Islands since 1892 , Germany established a protectorate over the Marshall Islands in 1885 , and over Nauru in 1888 .

After the defeat in the Spanish-American War in 1898/99, Spain ceded Guam to the United States , and Germany bought the Carolines and Marianas from Spain in 1899. During the First World War , Japan conquered most of the islands of the German protected areas in the South Seas and was awarded them by the League of Nations in 1920 as the Japanese South Seas Mandate . Nauru was administered jointly by Great Britain, Australia and New Zealand , the German South Sea colonies outside Micronesia also went to Australia and New Zealand.

Many of the islands were fought over during World War II . Guam was conquered by the Japanese in 1941, as was the Gilbert Islands. In 1943 and 1944 the USA and its allies recaptured the islands against some fierce resistance from the Japanese and also occupied the previously Japanese islands. Several islands have been turned into military bases for the bombing of Japan. The B-29 bombers, which dropped the atomic bombs on Hiroshima and Nagasaki , took off from Tinian . After the war the Japanese islands far as were UN - trust territory left the US in 1947. They carried out numerous nuclear weapon tests in the Pacific Islands trust area , which means that several islands such as Eniwetok and Bikini are still radioactively contaminated to this day .

The islands are often referred to as a "true nature museum", mainly in the lagoons and under water. Many historical witnesses can also be discovered on land in the jungle. The combination of natural phenomena, different cultures, customs and human-made conflicts and their legacies make Micronesia a world famous and interesting destination for divers.

Micronesia is made up of these states and dependent territories: