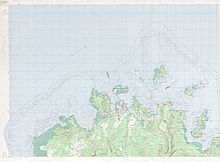 Map of the northwest part of the island of Pohnpei from 1983, on which Palikir is still shown as a largely undeveloped landscape

Palikir is the capital of the Federated States of Micronesia in the Pacific Ocean .

The city is located in the northwest of the island of Pohnpei in the community ( municipality ) Sokehs , which had a population of 6,227 inhabitants according to 2000 census. Only an unknown, smaller part of this lives in Palikir. In 1985 the establishment of a new capital for the Federated States of Micronesia was enacted by law. Since 1990 Palikir has been the capital and seat of the government of the Federated States of Micronesia. All ministries and some federal authorities are housed in a complex consisting of various buildings.

Palikir is also the location of the Pohnpei Campus of the College of Micronesia .

Palikir is historically mentioned as a section of Sokehs. A distinction is made here between Sokehs proper (island Sokehs, in the north), and Palikir as the part of Sokehs located on the main island of Pohnpei ( Ponape ).