The 50 states of the USA 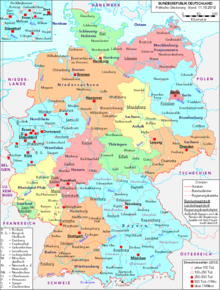 The 9 countries of Austria

As a constituent states (also part of States or sometimes states ) is generally referred to the political entities or units of government quality within a federal state federation ( state ) or a confederation .

In contrast to the overall state superordinate to it, the member state in the strict sense does not have any sovereignty under international law , but only a limited, shared sovereignty under state law , for example within the framework of competing legislation . Some international legal sovereignty rights can be preserved the individual states, such as the right to own diplomatic missions in foreign countries to maintain as Bayern in the German Empire was allowed. Its territory and its organs are subject to the “authority” of a higher state structure, the state as a whole; the central power is measured in principle according to the state constitution , in addition there may be agreements with the member states or declarations of the same. This leaves the member states with their own policy fields that are beyond the power of the federal state . Exceptions see the constitutions but often in war case and in other cases of emergency before.

The constituent state has its own political system , which is usually designed according to the principles of the separation of powers . According to this, there is an executive branch that presides over a government and a legislature which is exercised by a parliament , whereby elements of direct democracy can also exist. Especially in states such as Germany , the Switzerland , the United States or Australia , whose limbs or partial states have (at least partially) existed before the formation of the federal level, which falls to those the exercise of judicial power (judicial) in their area of expertise , which is why they have set up their own courts . In Austria and Belgium, on the other hand, which have only been federalized on the basis of an already existing unitary state, only federal courts exist.

Relationship with one another and with the state as a whole

Disputes between the member states and between them and the state as a whole are usually decided by courts, in modern state systems by constitutional courts , such as the Federal Constitutional Court in Germany or the Constitutional Court in Austria . If there is a lack of such an institution and a dispute has to be resolved politically, further escalations can result in an armed conflict between the federation and the sub-states, which can even lead to state collapse, as can be seen from the example of the SFR Yugoslavia and its former sub-republics could.

Regarding terminology , it should be noted that during the time of the North German Confederation and the German Empire (1867 to 1918) the individual states constituting the Federation and the Reich were referred to as "federal states". This designation was based on the linguistic usage of the time of the German Confederation (1815–1866), according to which the member states of the federal government were addressed as "federal states", and was independent of whether it was a confederation or a "monarchical-hegemonic federal state" acted. For designated as "federal link" constituent states of the German Reich also the Word was State used before this in the Weimar Constitution of 1919 by country has been replaced; nevertheless, the “federal state” continued to exist in other imperial laws until the 1930s. The term “federal state” can still be found partly in older legal texts , for example in §§ 979, 981, 982 BGB .

In the Swiss Confederation the member states are called cantons , in Austria countries as well as in Germany . In the last two states mentioned, however, the unofficial, synonymous term "federal states" is widespread. The term state is common, for example, in the case of the US states and the partial states of India .

Belgium , a federal state since 1993 , has two types of constituent states, the three regions and the three communities , which are differentiated according to powers. Since the powers of the region Flanders by the Flemish Community are exercised is sometimes talked about that in practice only five constituent states exist. The Belgian system is therefore known as asymmetrical federalism .

In the US , the individual states are called states ( english US states ), in Canada , there are provincial and territorial ( English Proivinces and Territories ). Australia is divided into states, territories and outlying areas .

In some federal states there are areas that are neither member states nor parts of them, but are directly subordinate to the federal government . These are referred to as federal areas or federal territories , if it is the federal capital , also as federal districts . On the other hand, it is possible that part of a member state does not belong to the state as a whole and thus forms a federal-free area .