Map of the nine federal states of Austria 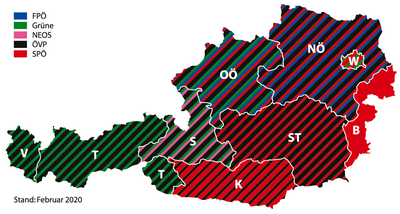 Political landscape of the federal states

Position of the countries in the state

Five of the nine Austrian federal states, Lower Austria, Carinthia, Styria, Tyrol, Salzburg (as an archbishopric), were established in the Middle Ages , Upper Austria became independent under Joseph II in 1783/84; Vorarlberg was part of Tyrol for a long time and became independent in 1861; In 1921 Burgenland, which had been part of Hungary until then, was added. In 1922 Vienna was finally separated from Lower Austria and raised to the status of a separate federal state.

The Federal Constitutional Law mainly uses the term land instead of federal state . The state constitutions also follow this choice of words.

Overview of the nine countries

Countries of the Republic of Austria
Austria

Lists of municipalities in Austria by federal state