This article explains the acronym NUTS. For the meanings of nuts see there.

NUTS ( French Nomenclature des unités territoriales statistiques ) describes a hierarchical system for the unambiguous identification and classification of the spatial reference units of official statistics in the member states of the European Union . 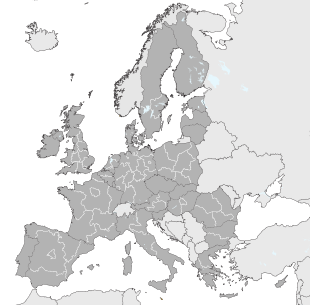 This system was developed in 1980 by the European Statistical Office in Luxembourg in order to be able to statistically compare regional units within Europe also internationally. NUTS regions are the basis for the quantitative assessment of regions by the EU. As part of regional policy, funds are allocated to specific NUTS regions (primarily NUTS 3 regions).

A hierarchical and unambiguous identification is therefore necessary.

“ Small regions (for specific diagnoses) ”… smaller regions, some of them already big cities

The former levels NUTS 4 and NUTS 5 were renamed LAU 1 and LAU 2 ( Local Administrative Units ) with the ordinance that came into force in July 2003 . They represent an additional statistical supplement to the NUTS system - to a certain extent non-binding. Since 2017 there has only been one LAU level.

Administrative units as a basis

The NUTS level to which an administrative unit is assigned is determined on the basis of population boundaries (these are guide values ​​that can also be exceeded or fallen below in individual cases):

For states that are overall smaller than the respective limit values, levels 1 to 3 are systematically assigned to the state as a whole.

Each EU member state, candidate country and the EFTA states are clearly identified using a two-digit combination of letters (e.g. DE for Germany). With the exception of Greece (EL instead of GR), this coding corresponds to the ISO 3166-1 alpha-2 standard for the globally unique coding of nation states and regions. This is also the NUTS 0 code.

To identify territories at hierarchical levels NUTS 1 to NUTS 3, one to three digits are appended to the country code, depending on the level. Sub-regions of a larger unit “inherit” the first digit of the NUTS code of this larger region and receive an additional digit. The associated room units (usually alphabetically according to the region name) are numbered consecutively with the digits 1 to 9, and letters are added if necessary. The "0" is not assigned and instead serves as a placeholder.

A single NUTS code can therefore provide information about the hierarchy level and membership in larger room units. The region can be clearly identified using a reference work.

Although Switzerland is not a member of the EU, the Swiss Federal Statistical Office has demarcated NUTS regions:

The following items appear since 1 January 2015 is out of date to be : va the number of provinces, counties, etc., see sources below the table. There is now NUTS-2016 . [1]
Please help to research and insert the missing information .

NUTS divisions of the states of the European Union  (EU-28), the associated states ( EFTA ) and the candidate countries ( CC-5 )