The 2,095  municipalities in Austria (as of January 1, 2020) are the lowest level of the administrative structure and are anchored in the federal constitution. In principle, according to Art. 116, Paragraph 1 of the Federal Constitutional Law in Austria, every area in the national territory belongs to a municipality . There are no unincorporated areas like in other states.

The federal capital Vienna and the other statutory cities are also municipalities, but their organizational structures and tasks differ considerably from the “normal” municipalities.

Concept of the community

The community as a local authority of local governments is generally in Austria congregation called the Federal Constitution local church . Occasionally, the term political municipality is used to make it more precise - for example to clarify the distinction between (political) municipality and cadastral municipality (measurement unit).

As a synonym, the community is also known as a commune . Above all, one speaks of municipal institutions or municipal taxes .

The local administrative level corresponds to LAU 2 in the European NUTS system .

There is no legal difference between small and large communities. A parish can consist of several places. The area of ​​a municipality usually comprises several cadastral municipalities in the land register , which, however, are independent of the political administration and are not necessarily congruent with the localities as geographical and statistical units. So it can happen that a community consists of only one place, but includes several cadastral communities. On the other hand, it is possible that a municipality comprises numerous cadastral municipalities, on whose area one or more places are in turn. This often has to do with the time of the respective community reforms and associated mergers .

Art. 120 B-VG provides for a grouping of local parishes into regional parishes based on the model of self-administration, but requires an implementation law in the form of a federal constitutional law, which, however, was never enacted.

Organs of the community

The organs of the municipality are:

For individual districts can be used as a direct representative of the mayor spot a mayor who can also come from among the councilors, are used. 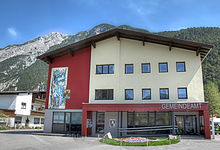 The municipalities are subject to legal supervision by the state, which is exercised by the state government and, in some cases, by the district authorities. The community supervision should ensure that the community does not violate the laws and ordinances applicable to it, that it does not exceed its sphere of influence and that it fulfills its tasks ( Art. 119a B-VG ). In addition, the municipal supervisory authority also checks the proper financial management of the municipalities. According to Art. 127a B-VG, municipalities with at least 10,000 inhabitants are also subject to control by the audit office . According to Art. 127c B-VG, the states can subject the municipalities with fewer than 10,000 inhabitants to the control of a possibly existing state audit office.

While the Austrian Association of Cities was founded in 1915 and re-established in 1946, the Association of Austrian Municipalities has existed since 1947. City days as top meetings existed as early as 1887, the first Austrian Municipal Day was celebrated in 1948. Dual membership in both organizations is possible. For membership in the association of cities, it is not absolutely necessary that a municipality also bears the title of city; markets and communities with over 10,000 inhabitants are also represented by the association (e.g. the market town of Lustenau ).

The tasks of the municipality are regulated in the Austrian federal constitution and in the respective municipal regulations, which are state laws.

A distinction is made between statutory and voluntary tasks of a municipality. Statutory cities perform not only the tasks of a municipality but also those of the district administration ; the municipality of Vienna also carries out state tasks . Municipalities are complete legal entities (as regional authorities ) and can set up both companies and municipal associations to deal with their affairs .

The municipalities have to perform a number of tasks that are assigned to them by federal or state law:

In addition to the tasks assigned by law, the municipalities can also take on other tasks in the interests of their citizens. Examples of such tasks would be the establishment of:

In order to be able to carry out important tasks more efficiently, municipalities use the opportunity in many cases to voluntarily join together to form municipal associations . This happens for example:

In most cases, the municipality name is identical to the name of the largest town. In the course of the various community reforms, however, they may have been given an artificial , i.e. relatively new name, for example by adding additional information for easier localization, especially if the place name is more common. There are also double names of two settlements of the same size. If the municipality name does not correspond to a settlement name, it can hardly be found on a map or a place-name sign.

But there are also peculiarities in the spelling. The spellings in the registers of the respective state government may differ slightly from the geographical spellings of the Federal Office for Metrology and Surveying . For example, hyphens are left out in one case and added in the other; the same applies to prefixes such as St. and Santa . The s spelling can also differ, so that a place name is spelled with ß and ss the other time .

The names of districts, judicial districts and other authorities, schools or associations do not always match the name of the seat municipality, just as many localities and cadastral communities have a different name. Even the municipalities, Statistics Austria and the institutions mentioned sometimes have one or more different names for a municipality.

In Austria, 147 municipalities have a municipality name with the name St. or Sankt as part of the name . Start from:

Not included at the beginning of the community name:

A distinction must be made between the census of the municipality and the granting of its own statute (town charter). Pursuant to Art. 116 Para. 3 B-VG, this is to be granted to a municipality with more than 20,000 inhabitants by provincial law upon their application, provided that the provincial interests are not endangered. A special feature of statutory cities, also called cities with their own statute, is their statute as a special organizational law that contains regulations that are regulated for all other municipalities in the state in the municipal code. The second essential peculiarity is that the cities with their own statute also take on the district administration and the municipality area also forms a district .

Territorial changes by municipalities occur either through consensual municipal council resolutions of the municipalities concerned and subsequent approval by the state government, or - even against the will of the affected municipalities - through state laws. The exact regulations for this are inconsistent in the individual federal states.

There are the following types of area changes by municipalities

A form of the municipality comparable to today has only existed in Austria since the provisional municipal law issued by Emperor Franz Joseph I on March 17, 1849 as an imperial patent for all of Cisleithania , i.e. all non-Hungarian countries of the Austrian Empire . Exceptions were in some cases the cities and markets that were previously directly subordinate to the sovereign.

The tasks of the communities, however, were until then under the responsibility of the respective landlord , who appointed a village judge for local business . This feudal system of mansions was abolished in 1848/49 as a result of the 1848 revolution .

The next regulation of the matter for the whole of Cisleithanien took place on March 5, 1862 with the law passed by the emperor and imperial council , with which the basic provisions for the regulation of the community system are outlined ; it was designated by the administration as the Reichsgemeindegesetz in order to distinguish it from the municipal ordinances issued on its basis by state laws .

The state of German Austria , which was established on October 30, 1918, decided in its Provisional National Assembly on December 18, 1918 that active and passive suffrage should be exercised regardless of gender . Women were now equal in elections. In addition, all men were now eligible to vote at the state and municipal level. Until then, the general and equal male suffrage, which was introduced throughout the state in 1907, had not been implemented by the federal states and municipalities.

In the Federal Constitutional Act that came into force in the Republic of Austria on November 10, 1920 , only principles for the structure of the municipalities were defined; As before, details were left to the state legislation.

From September 15, 1938 until the end of the Second World War , the German municipal code was in effect. With Article 1 of the Constitutional Transition Act of May 1, 1945, democratic Austrian constitutional law was restored.

Section 34 of the Provisional Constitution of May 1, 1945 referred to rural community ordinances and town ordinances to be enacted by law. Essentially, in the course of 1945, the statutory regulations (municipal ordinances) of the First Republic before 1934 were reinstated.

In 1962, the 1962 constitutional amendment was passed in the National Council. It contained the basic provisions of municipal self-government, under which the federal states had to lay down their municipal regulations in state laws. The amendment implicitly referred to the European Charter of Municipal Freedoms , which was adopted by the European municipalities in Versailles in 1954 . (It was made internationally legally binding by the European Charter of Local Self-Government, ratified by Austria and entered into force in 1988. )

Independently of this, in the second half of the 20th century, community reforms were carried out in some federal states, in which many communities were amalgamated. The communities were usually given the name of the largest town, but new community names were also created. The cadastral communities mostly kept their old names. However, these amalgamations repeatedly met with resistance from the population because the population structures did not fit together or because some places felt disadvantaged. Some congregations that were merged were divided again after decades. There are still very small communities with fewer than 100 inhabitants.

In 2011, the state government in Styria committed itself to considerably reducing the number of districts and municipalities as part of a structural reform . The trigger for these efforts was the high level of debt in the state and the consequent need to make substantial savings in the administrative sector. The merging of the districts took place from 2012 to 2013, that of the municipalities took effect in 2015.

Source for the entire section: Statistics Austria or for the areas: Federal Office for Metrology and Surveying (BEV)

Number of market or city parishes as well as statutory cities

Distribution of municipalities by type (as of January 1, 2020) :

* Average values ​​without and with the city of Vienna, which can be regarded as a major city. Population as of January 1, 2020

Largest and smallest municipalities according to inhabitants

Largest and smallest municipalities by area

Lists of municipalities in Austria by federal state

Lists of the market communities in Austria by federal state